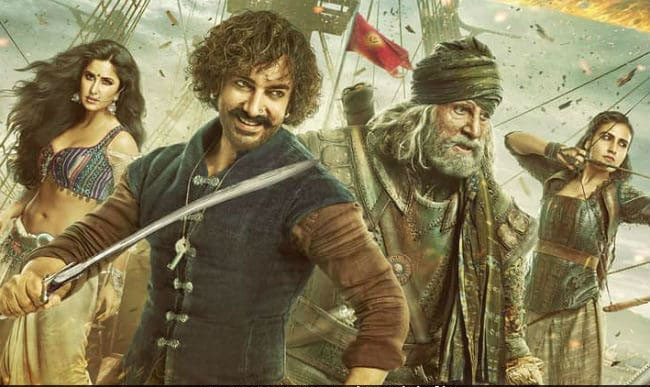 The makers of Thugs of Hindostan might have to face a major disappointment as the film got leaked online after the reports of it recording the biggest opening in Bollywood history made headlines. The film made its way to the piracy website Tamil Rockers hours after its release, as reported by Timesnow.com.
The film starring Aamir Khan, Amitabh Bachchan, Katrina Kaif and Fatima Sana Shaikh opened at around Rs 50 crore nett, making it the biggest Diwali release ever, as reported by Boxofficeindia.com.
However, the film which has been directed by Vijay Krishna Acharya film of Dhoom 3 fame and made under the banner of Yash Raj Films, got negative reviews from the critics. In no time, the moviegoers took to the social media to share their reactions and trolled the film with funny jokes and memes.
The film was touted as the biggest release of the year for its grandeur and celebrated star cast. The ticket prices have also been hiked against the normal practice keeping in mind the huge budget of the film. The film also recorded the third highest advance ticket booking at around Rs 27.50 crore and reaped the holiday advantage post Diwali.
Aamir , the perfectionist as he is popularly called, got his nose pierced in real life to play the role of Firangi Mallah – a man with no conscience in the film. Katrina has performed some extremely difficult dance steps in the film and is the only one to lend the glamour factor to the otherwise action film. Amitabh plays Fatima’s mentor in the film and has recorded a lullaby for her character as part of the film’s promotions.