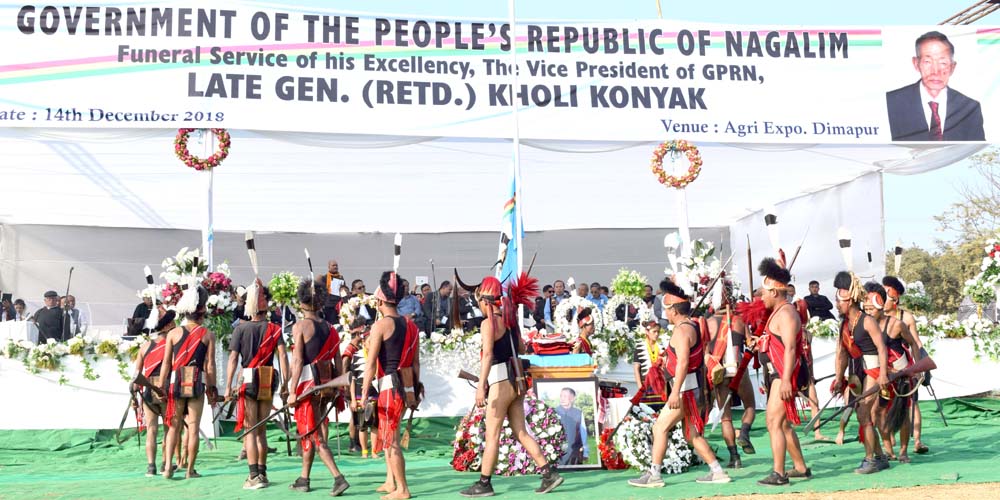 One of the greatest freedom fighters in South East Asia: ULFA chief

Dimapur, December 14: Thousands of people on Friday paid rich tributes to late Gen. (Retd.) Kholi Konyak, who passed away Wednesday in Delhi after fighting for the Naga cause in different capacities for the last 62 years. He was serving as the vice president of NSCN (IM) at the time of his death.
The reception programme of his mortal remains on arrival in Dimapur was jointly organized by Naga Hoho and Naga Council Dimapur cum funeral service was attended by civil societies, organizations, politicians and groups, both from within the State as well as outside.
Minister for Agriculture and Cooperation, G Kaito Aye, who represented the Government of Nagaland, termed the demise of Gen. Konyak a heartbreaking moment for Nagas and expressed grief that while waiting for solution, people are losing senior leaders of the Naga struggle one after another.
Referring to Late Gen. Konyak as a pioneer of Naga struggle, he said while Nagas can differ when it comes to correction, Nagas should not differ on solution and called on all the national workers and stakeholders to be united.
NLA Opposition leader TR Zeliang, representing the Naga People’s Front, called it ‘another black day for Nagas’ and said that as much as he knew late Gen. Konyak personally, he found him as one of the most realist and determined leaders who had a genuine desire to serve the Nagas and had joined the Naga struggle for Nagas and not for himself and remained so till the day he died.
Zeliang said late Gen. Konyak’s story to rise from the bottom to become the vice president is an inspirational one and the void that he is leaving is not easy to fill and his departure before a solution is a loss for all Nagas.
He asked the Government of India and NNPGs to bring permanent peace and harmony in the State, adding that Naga people should carry his torch till the final destination is reached.
Gen (Retd.) Thinoselie M Keyho, president, Naga National Council, said though it is a sad day, it is also in a way a joyful day as his death brought people together. He said if Nagas don’t come together, everything will go in vain.
Stating that if only Nagas were united, sovereignty would have already come by now, Thinoselie said unlike the past when things were simpler and there was only one way, today there are too many ways and too many opinions fighting over what is right and what is wrong. He said Nagas can unite if they reason together and know where things have gone wrong and what needs to be done. But no one has time for that, he lamented.
He urged the people to go home and rethink what is good for Nagas.
In his address, Arabinda Rajkhowa, ULFA chairman, said he knew late Gen. Konyak for the past 30 years and he was one of the most illustrious Naga leaders as well as one of the greatest freedom fighters in South East Asia.
Rajkhowa narrated stories of times in past when he and late Gen. Konyak were part of the United Front and shared foods on the same table and said he always encouraged others during critical times. He added that his demise leaves a void among revolutionaries.
Representatives of Naga Hoho, ENPO, NMA, FNR, NPMHR, NSF, UNC, ENLU, NTC, KUD, Rengma Naga People Council (Assam), Nagaland GB Federation and Arunachal Naga Students’ Federation, Wancho Council also delivered condolence messages.
Late Gen. Konyak was born on February 3, 1928 and had joined the Naga Army in 1956 and was elevated to the position of vice president, NSCN (IM) on May 17, 2016. He is survived by his wife, three daughters, six sons and grandchildren. (Page News Service) 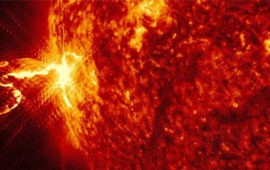 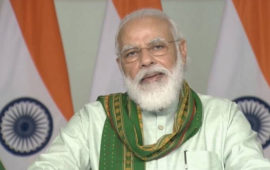