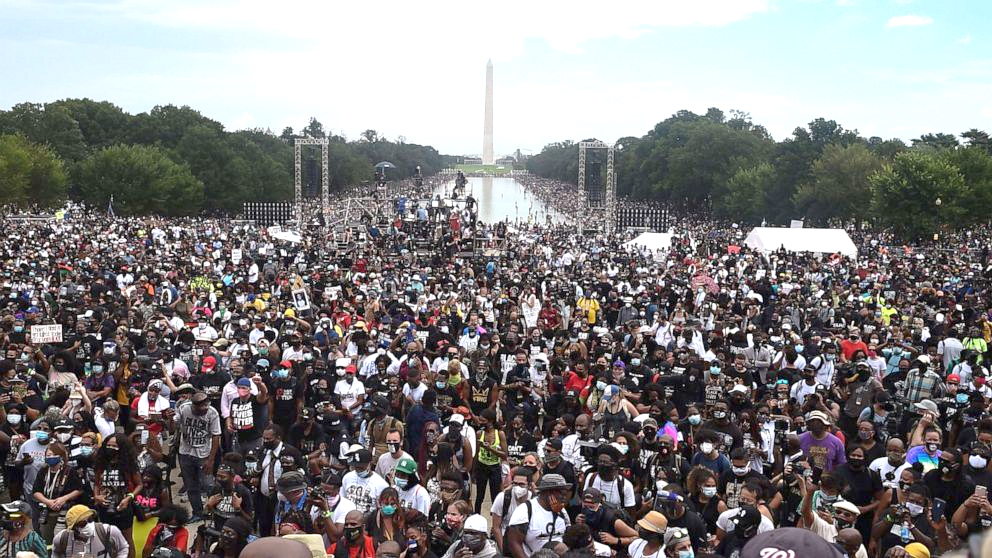 People attend the "Commitment March: Get Your Knee Off Our Necks" protest against racism and police brutality, Aug. 28, 2020, in Washington, D.C.

NEW DELHI, AUGUST 29: Thousands of people took to the streets of Washington DC to protest against police brutality and racism in the biggest gathering to take place in the US capital since the COVID-19 pandemic hit the country earlier this year.
A series of speakers addressed the protesters on Friday from the steps of the Lincoln Memorial, marking the 57th anniversary of American civil rights icon Martin Luther King Jr.’s famous “I Have a Dream” speech in the 1963 March on Washington, according to a media report.
In his remark, Martin Luther King III said, “We’re marching to overcome what my father called the triple evils of poverty, racism, and violence”.
Activist Frank Nitty, who said he walked 750 miles for 24 days from Milwaukee, Wisconsin, to Washington for Friday’s march, spoke to the audience about persistence in the fight for justice.
The event, dubbed the “Commitment March: Get Your Knee Off Our Necks”, came in the wake of the shooting of Jacob Blake, a 29-year-old black man, in Wisconsin on August 23 and the killing of George Floyd, an unarmed African-American man in Minneapolis on May 25, both in the hands of police.
Public anger was reignited after Blake was shot 7 times by a white police officer in Kenosha city, leading to consecutive days of protests and violence.
“I wish George were here to see this right now,” George Floyd’s brother, Philonise, told protesters on Friday.
“That’s who I’m marching for. I’m marching for George … and anybody else who lost their lives.”
Taking to Twitter, President Trump said, “Success: Since the National Guard moved into Kenosha, Wisconsin, two days ago, there has been NO FURTHER VIOLENCE, not even a small problem”.
“When legally asked by local authorities, the Federal Government will act and quickly succeed”, he further posted.
Following the commemorative rally, participants will march to the Martin Luther King, Jr. memorial in West Potomac Park, next to the National Mall, and then disperse.
Turnout in Washington was expected to be lighter than initially intended due to city-imposed Coronavirus pandemic restrictions that limit out-of-state visitors to the nation’s capital. To that end, the National Action Network organized a handful of satellite march events in South Carolina, Florida and Nevada, among others.
Robbie Williams, 67, traveled to the march from Covington, Kentucky, and said attending was her way of “speaking to my children and my people.”
Former Vice President and 2020 Democratic presidential candidate Joe Biden struck a different tone.
He tweeted, “As we mark the 57th anniversary of the March on Washington and Dr. Martin Luther King Jr.’s ‘I Have a Dream’ speech, we must continue the hard work of perfecting our union”.
“It’s up to all of us to carry on the march toward equality, liberty, and justice for all”, Biden further posted in a tweet.
Last month, following Lewis’ death, Democratic Senators reintroduced legislation that would restore a provision of the historic Voting Rights Act of 1965 gutted by the US Supreme Court in 2013.
The law previously required states with a history of voter suppression to seek federal clearance before changing voting regulations.
(TS with agency inputs)