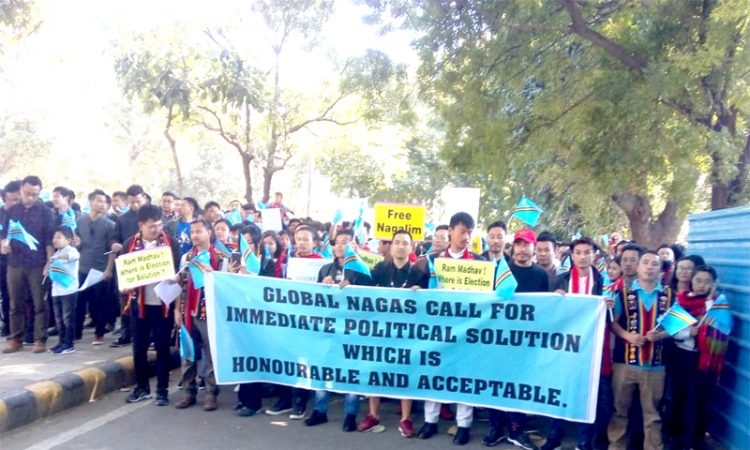 Dimapur, February 23: Thousands of Nagas living in Delhi staged a peaceful rally in the national capital on Saturday against the prolonged Indo-Naga peace process for over two decades that has seen no major breakthrough to this day. The massive rally was organized by the Naga Student Union Delhi (NSUD) in collaboration with Naga community in Delhi on the theme, “Global Nagas Call for Immediate Political Solution – Honourable and Acceptable”.
The primary purpose of the rally was to express the deep sense of despondent prevailing among the Naga due to protracted Naga political issue.
Under the spirit of unity, brotherhood and oneness, around ten thousands of Naga residents, including students, employees, lawyers, religious leaders, scholars, intellectuals, organisations and from the various professions in the national capital converged at Mandi House and later marched towards Jantar Mantar.
The event also saw a culmination of representatives from various Naga apex bodies, including Naga Hoho, NHM, NPMHR, FNR, NTC and other various organizations like South Asian Forum for Human Rights (SAFHR), National Alliance of People’s Movement (NAPM) and Pakistan India Peoples’ Forum for Peace & Democracy (PIPFPD) and many others.
“Solution will be there only India is willing to recognize our rights. This really has nothing to do with the ensuing election,” said Neingulo Krome, Sec. Gen., NPMHR.
Hundreds of volunteers and choirs from various Naga fellowships in the city also took part in the rally carrying placards with slogans such as “Nagas want! Solution, Solution, Solution”, “Nagalim, Nagalim, Nagalim! March on, March on, March on”, “Modi must Respond! Where is the Solution”, “Kuk Kuk Kuknalim! Victory, to Our Land to the People”, and so on.
“I am impressed by the presence of youngsters’ discipline and devotions to the cause of the Nagas self-rule and I am quite sure this will continue till they achieve their objective,” says Tapan Kumar Bose, former secretary general of the SAFHR.
“While the negotiation keeps prolonging on the pretext of one reason or other the situation back at home, Nagalim has become from bad to worse. Unless the Union government takes the matter seriously and find the solution, no one knows what is going to happen to the future of the Nagas,” a press release issued by the organizers stated.
The rally was a symbolic expression of Naga’s cry, asking global communities to give their attention and help us to find a solution to our problem, it added.
The organizers said the peace talks between the Government of India (GOI) and the National Socialist Council of Nagalim -Isaac-Muivah (NSCN-IM) have witnessed 21 years of negotiations and along with the Working Committee (WC) comprising six Naga National Political Groups (NNPGs) since November 2017 has been continuing without much tangible result except the most recent Indo-Naga Framework Agreement 2015.
The historic rally, therefore, is also a call to expedite the ongoing negotiations and facilitate an early democratic solution of the decades-old Naga political issues which is acceptable and honourable to the Nagas based on historical facts and political legitimacy, it said.
In 2003, the Government of India under former Prime Minister Atal Bihari Vajpayee made a bold move by recognizing the “unique history of the Nagas”. The Nagas appreciated the Government of India for recognising the unique history and it is the hope of every Nagas that the political solution will be based on its historical facts and political legitimacy.
The Global Naga Mass Rally was carried out with the demand for early conclusion of the peace treaty, with a political solution which is honourable and acceptable to all Nagas, the release stated. (Page News Service)