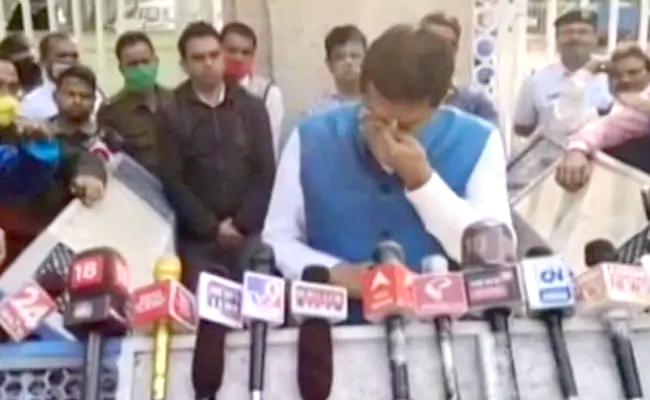 Rajib Banerjee has not named anyone who he claimed was carrying out propaganda against him.

Kolkata, January 22: West Bengal Minister Rajib Banerjee today quit the government citing a change of portfolio two years ago and broke down on camera, saying: “I never thought a day would come when I would have to take such a difficult step”. He is the third minister to resign this month in the middle of an exodus from Chief Minister Mamata Banerjee’s Trinamool Congress ahead of elections.

Mr Banerjee did not respond to questions on whether he was headed to the BJP, like dozens of Trinamool Congress leaders before him.
As he emerged from the Governor’s house Raj Bhavan after handing over his resignation, he told media persons that he was hurt when he learnt from TV, one fine day, that he had lost the Irrigation ministry and had been moved to Forests. On the belated response to something that happened two years ago, he said he did not take any step as he was stopped by senior leaders.
“There is no problem with the changing of portfolio, but I was hurt by the way it was done,” Mr Banerjee said. “I am grateful to Mamata Banerjee for guiding me for all the years. I reiterate my commitment towards working for the people of Bengal.”
While there is no formal announcement, Mr Banerjee is widely expected to join the BJP on January 31, when one of the party’s top leaders, Home Minister Amit Shah, is scheduled to address a rally in Howrah.
His resignation comes days after he had complained about “some leaders in the Trinamool Congress (TMC)” carrying out propaganda against him. He had struck several discordant notes against the government and the party over the past two months. Senior TMC leader and minister Partha Chatterjee met with his at least twice, to try and bring him around.
“There are a few leaders in the party who only exploit workers. They run false propaganda against me using some party workers,” he said on January 16 during a Facebook Live session, according to an ANI report. He, however, did not reveal any names.
In the bitter run-up to the Bengal election due by May, scores of leaders and workers have left the Trinamool for the BJP.
In December, Mamata Banerjee lost her top aide Suvendu Adhikari, who first quit as minister after an extended period of uncertainty, then immediately joined the BJP. Over 40 more leaders and workers followed him out of the Trinamool.
On January 5, Minister of State for Sports Laxmi Ratan Shukla resigned. He, however, has not quit the party.
The BJP, meanwhile, is investing considerable time and energy in its campaign to oust Mamata Banerjee’s government.
Party heavyweights such as President JP Nadda and Amit Shah have been regularly visiting the state. Prime Minister Narendra Modi, too, will be in Kolkata tomorrow to mark the birth anniversary of Netaji Subhash Chandra Bose. (ndtv)