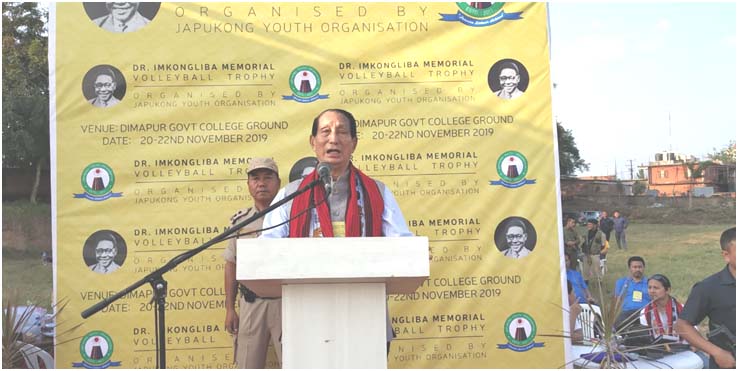 Dimapur, November 20: Former Nagaland Chief Minister, Dr SC Jamir on Wednesday today called upon Nagas to think globally instead of remaining confined within a tribe, village, or State.
Speaking as the inaugural guest on the occasion of the first edition of Dr Imkongliba Ao Memorial Volleyball Trophy here at Dimapur Govt. College ground, Jamir asserted the need for the people to restore the courage, discipline, and hard work for which Nagas were known. He also lamented the absence of honesty in Nagaland society.
“Today people call Nagaland a corrupt state and this is not a complement,” he said adding progress comes when people work hard, and instead of whining, the youth should do something concrete for themselves and for Nagaland.
The former Odisha Governor said now that solution to the Naga issue has neared, it is also time to take care of one’s character and the economy and inculcate the spirit of survival and dominance like Israel and build a righteous State.
Jamir also lamented the fact that in present time, the sacrifices made by yesteryears’ leaders are not highlighted by any group, and said those sacrifices must be known and history must be understood for the present and for the future as history repeats itself. He said for many years, a black curtain has prevented the people of Nagaland from learning and understanding the sacrifices made by Dr Imkongliba Ao and these were the very reasons that he chose to be a part of today’s programme.
Jamir, one of the signatories of the 16th Point Agreement which brought about the creation of Nagaland state, said what Nagas are today is because of the sacrifices made by the leaders like Dr Imkongliba, who had understood that Nagaland cannot remain isolated.
There are people who like to hide from the truth, but history repeats itself whether people listen to it or not and it is repeating today, with people coming together as brother and sisters irrespective of tribes and being baptized as one by the same priest and the last baptism took place on October 31, he added.
Earlier, chief host and Minister of Higher & Technical Education & Tribal Affairs Temjen Imna Along Longkumer said every great thing starts with a humble beginning and congratulated the organizers for remembering the name of an icon who was murdered for his ideals.
He said that it is high time for Nagas to remember the ideals and idols but sadly, people have been afraid or shying away from associating with them and because of gun and death, people are staying away from the true pride of being a Naga.
Confessing that he has always regarded Dr Jamir for his beliefs, he said it is shameful that people stay away from him because they fear they will be questioned and threatened. “If Nagas lose vision because of fear, lies, hypocrisy, and sarcasm, people like Dr Imkongliba would be ashamed of Nagas,” he said.
Tali Lkr, IAS, Rtd., and son of Dr Imkongliba talked at length about Dr Imkongliba, his simplicity, and about his enthusiasm for sports, particularly football.
The 3-day volleyball tournament will conclude on November 22. Nine different teams are participating in the tourney. (Page News Service)