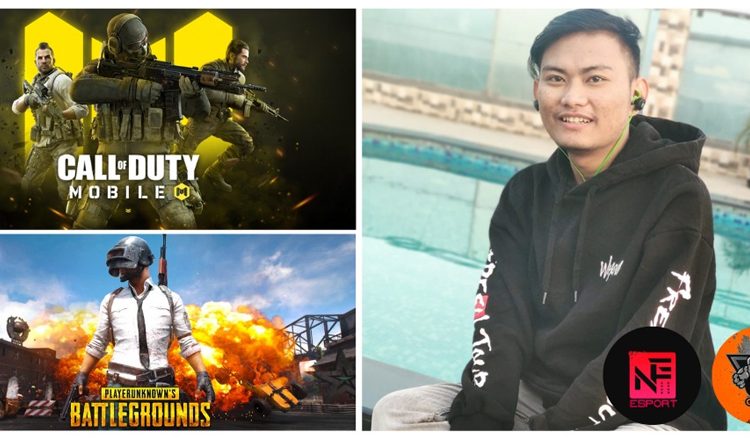 A largely ignored sector in Nagaland, this underground phenomenon is raring to hit the surface

Prasanjit Dutta
DIMAPUR, JANUARY 28: The eSports industry is one of the very few to register a surge despite the pandemic and lockdowns around the world.
While this form of competition is rarely acknowledged or taken seriously in Nagaland, a significant section of young Nagas are hooked to mobile gaming, PUBG Mobile in particular.

In India, according to a recent IFSG-KPMG report, the industry is already worth Rs 4,380 crore and is estimated to reach Rs 11,880 crore by 2023. While the industry is growing in leaps and bounds in India, the same cannot be said of Nagaland though there have been some developments in the past few years.
These developments specifically have remained confined to hosting small tournaments by groups and individuals that more often than not lack organizational set up, rarely earn anything significant.
Interacting with Nagaland Page, Hekavi Yeptho, one of the founders of the start-up called ‘NE eSports’, said that while eSports is emerging in Nagaland and India, it mostly revolves around hugely popular games like PUBG Mobile and Mobile Legends (both banned now).
NE eSports is perhaps one of the only few structured start-ups relating to eSports industry that exist in the State. The other founders of the start-up are Huton Yeptho and Khuketo Chophy.
NE eSports held its first PUBG Mobile tournament in July 2020 and the total prize money for the tournament was Rs 1 lakh, out of which Rs 50,000 went to the winner, Rs 30,000 to the first runner-up and Rs 15,000 to the second runner-up.
Besides these, there was an award for the MVP (Most Valuable Player) of the tournament who received Rs 5,000.
In that tournament, according to Hekavi, seven teams were from outside the Northeast Region, nearly 30 teams out of the total 100 were from Nagaland, and the rest were from the other north-eastern states.
According to him, Nagaland has some great players but they are hugely underrated because of the people’s lack of knowledge about eSports here.
More crucially, he said, they lack support from family and community as gaming is not understood here and is seen as a waste of time. But he was hopeful that like music, which was once not taken seriously as a career option ‘but is now making waves’, eSports too will break the barrier.
The global video game market was said to be worth $159 billion in 2020, which is around four times the revenue of box office and almost three times the music industry’s revenue. The largest market by revenue is Asia-Pacific with almost 50% of the game’s market by value.
Hekavi said that when the news of PUBG Mobile ban came, he didn’t worry much ‘because he knew in his heart that it cannot happen as PUBG Mobile is huge in India’. And the news of PUBG Corp parting ways with China’s Tencent to retain India’s market came as no surprise to him.
On the prospect of making a career in eSports, Hekavi said that he knows good players from Nagaland who stream and earn Rs 1,000 to Rs 2,000 per day ‘and if they are really lucky’, the amount can be as high as Rs 10,000. Besides being streamers, good players have the opportunities to become coaches as well.
He, however, felt that one of the biggest reasons holding back gamers in Nagaland when it comes to competing in national and international level is the high ping rate due to poor connectivity in the region.
A high ping in gaming means a longer wait to send and receive signals from the game’s server.
According to him, in Nagaland the ping mostly stays beyond 100 ms, causing the games to lag and providing great advantage to someone playing in the same tournament in another part of the country getting a good ping rate between 20 ms to 40 ms.
While the launch of FAU-G brought disappointment to those who were looking forward to it because of the average gameplay and limited functionality despite ‘good enough’ graphics, a huge number of PUBG players have migrated to American company Activision’s Call Of Duty: Mobile and Singaporean company Garena’s Free Fire which have similar features and gameplay like PUB-G.
Interestingly, Activision’s COD:M, soon after the ban on PUBG in India, ended partnership with Tencent and removed the credits of Tencent from COD:M. The reason for the termination, however, was mainly because of the restrictions put by the US government to make transactions with Tencent.
Sanak, an occasional mobile gamer in Dimapur, was among the ones who tried out FAU-G soon after its launch, but uninstalled it within a few minutes saying “it was miles away from how it was hyped”.
While PUBG is now totally banned in India, it is still largely played in the country using VPN and in some high-end smartphones like the models manufactured by the Chinese company OnePlus, which works without the need of using a VPN.
Imna Tzüdir, an avid gamer, shared similar views with Nagaland Page on high ping rates in Nagaland. But unlike Hekavi, he felt eSports in the State has no future as per current trend.
According to Imna, eSports and having talent in it are underrated in the State as the older people want their children to take up traditional career routes.
Imna, who is part of a squad that goes by the in-game name ‘TNaGä’, has participated in around 20 regional and national tournaments. Till date, he has earned close to Rs 20,000 in cash.
TNaGä, formed less than a year ago, was defeated in the quarter-finals of a recent national-level tournament, which had the top prize of Rs 10 lakh.
Imna said that the ban on PUBG has left many of his co-players disappointed and many opted to migrate to games similar to the format of PUBG Mobile like Call of Duty: Mobile, Free Fire and Fortnite.
But the news of PUBG Corp and China’s Tencent parting ways is a positive development, he shared.
HTJ Games is another name that has been organizing a number of PUBG Mobile tournaments in the State. Bendang, one of the members of the squad, said that they organize the tournaments quarterly ‘for the love of gaming and to motivate new players’, and does not follow any business model.

Almost all of the registration money is distributed among the winners.
After the ban of MLBB, the team was conducting only PUBG tournaments. But now, PUBG has also been banned by the Government. HTJ stands for “How’s the Josh?”
On September 2, the Central Government had banned 118 apps with Chinese links citing concerns over threats to India’s safety and sovereignty. Even as the PUBG Corp, the parent firm has snapped ties with Tencent, the Ministry of Electronics and Information Technology has hinted that just a change in the ownership off the app would not lead to reversal on the ban anytime in near future.
While eSports’ presence in India can be traced back to a long while, it is only in the recent years that the industry has seen a spike due to cheaper internet costs and affordable smartphones. In the context of Nagaland, until and unless the connectivity in the State gets better and uniform, the future eSports scene appears largely unwelcoming for now.
Further, the lack of knowledge among the general populace only adds to its bleakness. Like Imna, many don’t see a future in eSports in the context of Nagaland for reasons that seem valid. But then, there are also people like Hekavi, who are optimistic about it and expect things to get better with time.