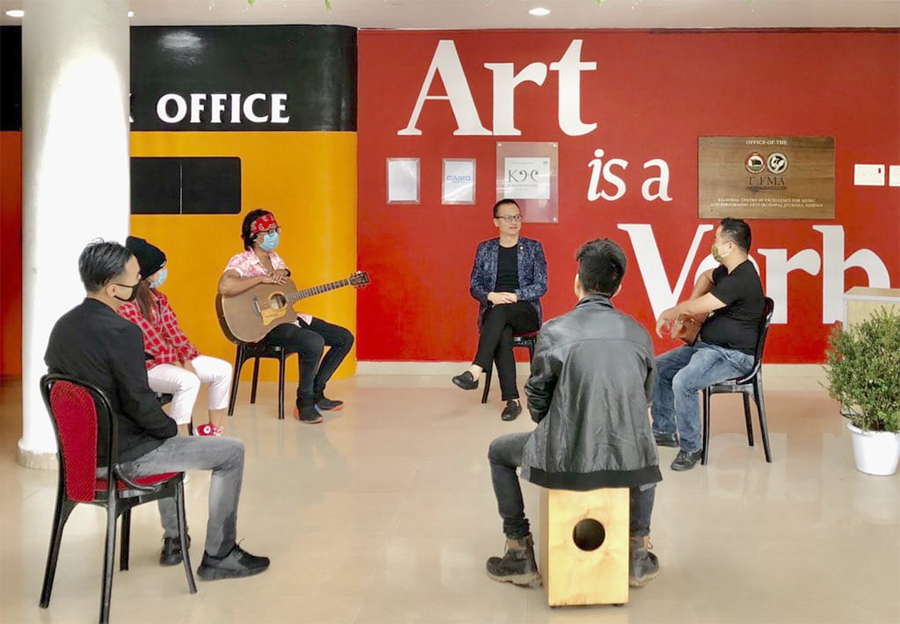 Kallol Dey
KOHIMA, SEPTEMBER 20: In September of 1997, Capitol Records headquartered in California released Duran Duran’s Electric Barbarella as the internet’s first-ever digital single for sale ~ a milestone that changed the music business ~ and led to the industry selling directly to consumers. This September, 23 years later, and oceans apart, a veteran Naga musician is looking to herald a technological (and attitudinal) shift in how Nagaland’s music industry operates by setting up a one-stop online shop for Naga music.
Naga musicians and their music will soon be available on app-based platforms envisioned by the TaFMA (Task Force for Music and Arts), signaling the coming of age of Nagaland’s music industry.
TaFMA, which operates out of the Regional Centre of Excellence for Music & Performing Arts (RCEMPA) in Jotsoma village, has seen a paradigm shift since Theja Meru took over as Advisor in June 2019. Seated outside his office in the sunny September morning tempered with the cool breeze from the Puleibadze Peak, Meru said TaFMA is working towards professionalism, employment and revenue generation. Talking to Nagaland Page, the musician spoke about music in the time of the COVID-19 pandemic, and the road ahead for TaFMA.
Meru said while many plans have taken a hit, the pandemic has nonetheless “strengthened our online presence.” TaFMA, as an organization, has managed to evolve and move fast to the digital space with online collaborations and shows, he claimed.
“So instead of being a disadvantage, the situation has given us more global audience. People are calling us up regularly, and we can’t wait to capitalize on the network created.”
TaFMA is currently focused on the A to Z programme, besides the Sunshine Orchestra project under AR Rahman Foundation and the Pandit Vishwa Mohan Bhatt and Nagaland Ensemble. TaFMA’s A to Z programme includes training and building a youth choir, a band, the Musicians Incubation Programme and an app for artist booking. Very recently, TaFMA also signed a MoU for a permanent partnership with the V-Rox festival of Russia, one of the biggest annual rock festivals in the world, while partnerships with other international festivals are being sought to promote Naga talents. “We are also writing to Israel and America for knowledge partners. For our music ecosystem to grow, we need exposure and knowledge exchange,” Meru stated.
“Along with our talent, we have to grow in the theory of music, knowledge of music and the business of music must go together, or else this industry will forever depend on welfare,” the TaFMA Advisor categorically stated while emphasizing on creating an ecosystem of serious musicians and community engagement. “Everybody thinks they can sing. They think I can sing so TAFMA will pick me and give me a job. This sense of entitlement has got to go.”
Meru disclosed that he is constantly online scouting and identifying talents who are seriously and consistently writing music, performing music. “I call them to my office or conduct sessions on Zoom and give the handpicked ones the 100-song challenge in the first phase.” He says that while many want to be full-time musicians, they know just around 10 songs, and do not know how to read basic music. “Once they manage to complete the 100-song challenge, they have to perform in front of me, and I will mentor and groom them starting from the very basics.”
“If you are good, no matter who you are or even from the farthest corner of Nagaland, we are gonna select you, groom and promote you, provided you can give the commitment for 3 years.”
When TaFMA manages to create an adequate bank of artists, an app called the Book The Artist will be created. Photoshoots and video shoots will be conducted for the selected artists and they will be put up on the app. “Using the app, you will be able to choose according to genre or artist and book them for any events. The app will be controlled directly by TaFMA.” The artists will initially perform locally. “But we are tying up with big hotels around the country and the world so that our Naga artists can find gainful employment,” Meru informed. “Our local market is the global market; you show your work, let the world hire you. Then you will get more than what the Government can pay you,” Meru asserted.
TaFMA is also working towards a music app, to sell Naga music online. Apps like Spotify has 60 million music tracks, and looking for the few Naga artistes in Spotify is like looking for a neddle in the haystack. Theja feels that though it is encouraging to see Naga musicians on Spotify, they hardly get any traction. So the need for an exclusive app for Naga artists. “All our music will be on one app, people can pay and choose from a wide range of songs including indigenous and Hindi songs. That is the goal, to sell our music.”
Meru says that until the current situation improves, focus on online will continue. Towards that TaFMA is planning to create pre-recorded shows, like Coke Studio, and sell online. It is also in talks with some TV channels and entertainment app. 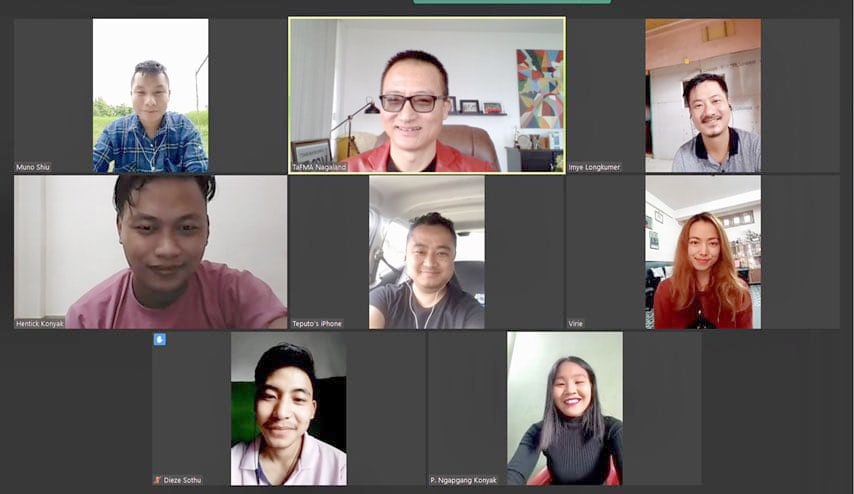 Revenue Generating Model
“With the revenue situation that our state is in, our Chief Minister has directed us that whatever we do should generate revenue. Those days of solely depending on welfare are over,” Meru, who is acknowledged as a successful entrepreneur, says. TaFMA is raising money through sponsorships so that it is not solely dependent on the Government. One such sponsorship has helped TaFMA continue with its activities and grow during the COVID situation. Casio is the corporate partner of TaFMA, and it had sanctioned Rs.10 lakhs during the 2019 Hornbill Music Festival. But the money came late, “but right in time when the world got hit by the pandemic,” Meru informs.
Moreover, TaFMA is also set to launch Casio Piano Clubs in all the districts of Nagaland, with the first launch scheduled for next month in Dimapur. The Piano Clubs will have only Casio instruments, and the company will give generous discounts on purchase.
In line with the Chief Minister’s vision that the Hornbill Music Festival become a revenue generating, the TaFMA has also come up with the concept of a traveling music festival. The Hornbill Music Festival, 20 years old now, will continue to be held in Nagaland. But during the rest of the year, the festival will travel to major cities. Meru says, “In the cities we will get more sponsors, so we will generate revenue. We come back with some revenue and not depend on the exchequer. Moreover 50% of the performers will be local artistes, which also gives us the exposure.”
“The Nagaland music industry still has to depend on Government grants. But our whole focus is to work towards a self-sustaining ecosystem by generating revenue while taking the Naga music industry to a new level,” Theja concludes.
Music is critical at all points in time, and even more during the current situation when people are looking for hope and inspiration. The scene of Italians singing from the balconies during lockdown filled the world with hope. And the pandemic has been witnessing innovative concepts taking music online. Known for its extravagant shows, Nagaland also joined the world in making sure that the show goes on, albeit online. But for this Northeastern state, which has made an unprecedented investment in creating a music industry, hopefully the technological shift will see a tectonic pay back.