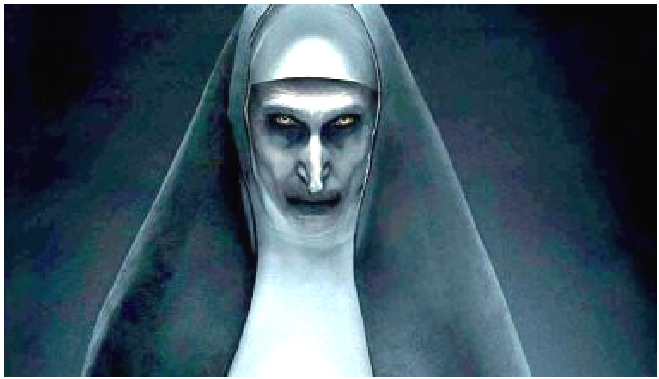 When it comes to horror, the old adage ‘fact is sometimes stranger than fiction’ tends to come to fore – and in the case of new movie, The Nun, it’s no different.
The newest – and darkest – chapter in the Conjuring universe, is set before Annabelle: Creation, Annabelle, The Conjuring and The Conjuring 2, telling the story behind the demon Valak we briefly glanced in Annabelle.
Director Corin Hardy describes The Nun as “more of an adventure mystery” than an outright horror, but that may be hard to remember when faced with the demonic drawn face of the demon Valak.
While you’d think the demonic scares and unsettling scenes were just for the camera, it turns out behind the scenes things were just as terrifying.
The Nun, Hardy’s second movie after his directorial debut with The Hollow in 2015, takes us back in time – when a young nun at a cloistered abbey in Romania takes her own life.
A priest with his own haunted past and a novitiate on the threshold of her final vows are sent by the Vatican to investigate.
Together, they uncover the order’s unholy secret, risking everything as they confront a malevolent force in the form of the demonic nun.
Journey to Romania
Screenwriter Gary Dauberman said Francis Ford Coppola’s Bram Stoker’s Dracula was an important visual and tonal reference for The Nun. It’s a fair comparison as much of the filming was done in the vampiric Romania in order to capture the right mood. While the movie is set in 1952, a lot of sets were based in 14th century buildings.
Taissa Farmiga, who plays Sr Irene, said it helped her get into character. “With castles, cloisters and rolling countryside it doesn’t feel as if you’re in the modern day – it feels as if you’re transported back in time,” she said. “It feels as is a demon could possibly be around the corner.”
The possibility is key here, as the set crew experienced their own supernatural disturbances, ones that didn’t come care of special effects or Hardy, who was known to growl and create the demonic noises himself to help the actors imagine the horrors.
Ghostly meetings and blessing the set
Making sure they took all precautions, the team got the production blessed by an Eastern Orthodox priest, Father Cosmin, at Castle Corvin.
But despite this Hardy – and the crew – discovered a few strange things.
Hardy found a mysterious “handprint” in the dust on one of the sets at Corvin Castle, then something weirder happened.
While filming a particularly atmospheric scene in an old Romanic fortress in Mogo?oaia, Hardy had a supernatural encounter with what he believes was a pair of ghosts of Romanian soldiers.
Most people would be terrified by such an encounter but Hardy believed they were just “curious about the filming”.
It may sound strange but others have reported sighting of ghostly soldiers – or the army – in Romania.
At another location, Banffy Castle, dubbed “the Versailles of Transylvania”, there have been reported hauntings.
Legend says that there were often sinister shadows that seemed to be soldiers, while others heard strange noises, groans, sounds of footsteps or indistinct voices.
Then in Calugareasca Forest, it’s said the last monk killed by the Turkish army threw a curse upon them so that, after death, the spirits of those who have defiled hands with the blood of the monks returned to the thickets, from where they never found the way out.