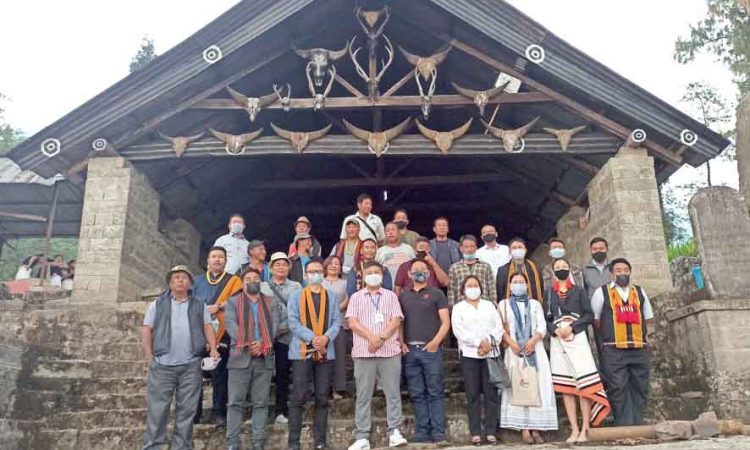 Dimapur, May 1: ‘The Khonoma Experience: Tourism strategies for the new millennium,’ an event initiated by the Dolhuni Dz Golato (DDG), a group formed mainly for conservation of nature in Khonoma, was held at Terhotsiese, Khonoma on May 1. During the event the local community, all stakeholders and the State Government came together to deliberate, share and set strategies to make Khonoma village as one of the model village of tourism in Nagaland.

Khonoma village was declared as the first ‘Green Village’ in the State and also the first in Asia in 2005. It is the only village which conserves and preserves its flora and fauna in the whole village territory, which is first of its kind in Nagaland. The success of cultivation of alder trees in the village is now emulated by others. According to NEPED report, Khonoma alone produces 24 species of rice. Bird and butterfly watching activity is also gaining ground which has brought out success stories such as of Birdwatcher, Angulie, who started his career as a tourist guide and is now an expert and sought after by birdwatchers from outside the State.
Speaking as the special guest, Advisor to Chief Minister, Abu Metha termed Khonoma village as the land that shaped the history of Nagaland and expressed gratitude to the village for producing many great sons and daughters of the land. He called the village a ‘historic and legendary village’ and added that Naga history was written from it. Metha also applauded the various steps taken by the village and making Nagaland known throughout the country and even the world.
The Advisor stressed on the impact of the COVID-19 pandemic on the tourism sector. While stating that the pandemic has adversely affected the sector to great length, he encouraged the gathering to use the pandemic as an opportunity to strengthen, introspect and to be prepared better. He also highlighted on the need to improve and upscale with better tourism strategies and guidelines in place.
Director, Tourism Department, Ajanuo Belho said that with COVID-19 immensely affecting the tourism industry the Government has adopted strategies for revival and sustenance of the industry. To improve governance in the sector, local tourism observatories will be set up with stakeholders to generate reliable data in tracking customer behaviour and preferences. Taxes, charges will be reviewed and transport will be regulated considering the interest of customers and viability of business as well. It will also introduce client safety measures with emphasis on COVID-19 safety. In capacity building, skill development especially enhancement in digital skills and digital payment systems will be promoted.
With Khonoma village getting the highest number of tourists, Belho suggested more facilities and personalized service can be provided by the village for higher revenue generation, and also suggested for increasing length of stay of tourists by offering activities to indulge in while in the village.

Kezhasezo Kenneth Punyü, who chaired the event narrated on how Khonoma village began the conservation of its natural flora and fauna not just for the benefit of the village but for the State as a whole. He also shared about the role played by the Khonoma Nature Conservation and Tragopan Sanctuary (KNCTS) Trust, Khonoma Youth Organization, Khonoma Students Union, the community and all stakeholders involved in the success of Khonoma becoming a top tourist destination in Nagaland.
The formal programme was followed by a discussion hour where the local community, other stakeholders and the Government officials had an interaction where various problems and issues were discussed.
(Page News Service)