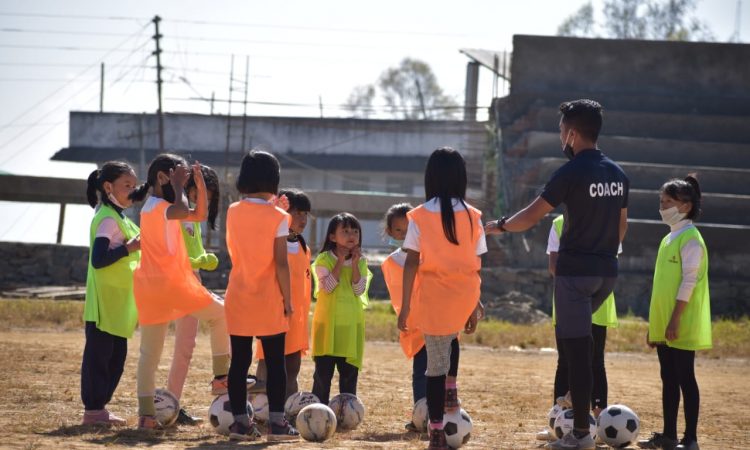 DIMAPUR, JUNE 20: With the exception of the few thousands fortunate enough to experience it live, to a majority of fans sport usually arrives in boxes ~ packaged within the perimeters of a TV or a computer screen, a newspaper page or a mobile phone.

And in front of those boxes, heroes are discovered and sworn enemies marked for a lifetime.

Bonds are established in spite of the distance and, with the delicious nonchalance of Andrea Pirlo dinking Joe Hart with a Panenka at Euro 2012, it occupies its permanent seat at the family table.

For Nagas of a certain vintage, foot-balling allegiance to the South American nations of Brazil and Argentina are considered family legacies and heirlooms. No questions asked, this is a loyalty that is passed on to the next generation by each preceding ones.

With no internet and cable TV, initially their experiences were mostly shaped by newspaper sports pages and sport magazines ~ stories told not through film but photographs and the printed word.

Conversely, for another generation, these were sporting tales told through a father’s or an uncle’s memory. An experience of the imagination.

The mode or the medium has changed over the years, but the language hasn’t.

Football is still the language of the summer in 2021 and two continental tournaments ~ one each in Europe and South America ~ are being played out on every device that facilitates telecommunication.

“It is still very distinctly vivid, our dad waking us up at midnight to watch that 1990 World Cup final (Argentina Vs West Germany). Those years, Maradona was more like one of our own family members with who we wept, cried and shared joys. West Germany won that final, and for a moment I couldn’t digest my dad’s joys who was (and still is) a Germany supporter”, said Lanusunep Longkumer while speaking to Nagaland Page.

A sport, in particular football, fanatic, Lanusunep’s experience of sport had its origin in Black and White TV screens.

“During  the ’80s and ’90s, one still remembers watching football in our locality in that B&W television without a tiniest of space to move our toes. One’s joy became someone’s grief; even women knew who was Roberto Baggio and tried not to miss any of Italy’s matches as much as their sons and husbands loved the likes of Romario, Valderama and Klinsmann”, he said.

These football aristocrats then passed on the baton to the galacticos like Zidane, Ronaldo (the Brazilian) and David Beckham, he added.

“Then came cable television networks by the end of the previous century. It added a whole new dimension to the way we love the universal game. It made us enjoy football as well as analyse each and every player’s profile like a football pundit. Apart from World Cups and continental championships like the European and Copa America, club football became a force to reckon with for the football fans with the advent of cable and dish TV networks.

“We have embraced the likes of Manchester United, Arsenal, Chelsea, Real Madrid, Barcelona and Juventus into our fold, thanks to upgraded television (and now mobile) networks. The likes of Ronaldo, Messi, Mbappe have carried the legacy of this beautiful game to new heights, even to unlimited commercial scales”, he shared.

“I remember going over to my dad’s friend’s place in 1994 to watch the World Cup. That’s the earliest memory I have of watching football on television. I remember being very happy at that time. Maybe it was because we did not have a television. But out of all the television I must have watched, I remember that feeling in particular because watching football together was just a different experience”, he told Nagaland Page.

“The experience now is a different from 1994. You can watch it almost anywhere, at any time, you can re-watch again and again, get the latest updates anytime, live telecast is also much better and all. But at the same time, the experience has not changed. I remember having some of the best times of my life, watching football together with friends and family. I still remember going over to my dad’s friend’s place in 1994 to watch the World Cup because we were going to watch football ~ The World Cup! ~ and not just television”, he said.

Just the other morning, at 5:30 a.m., he had watched Argentina play against Uruguay in the Copa America alone.

“But my friends were also awake and watching and we were discussing and chatting throughout the match. I guess with football one is never truly watching alone”, said Arien.

In so many places across Nagaland, sporting events, football especially, used to be community affairs.

“The first football match I saw on TV was between Argentina and Italy during World Cup 1990. It was shown in our village panchayat hall. After that everyone became a Maradona and Argentina fan. Likewise, we find that many of our older generation support Argentina at any cost”, said Imnamayang Longkumer.

“However, with the advent of technology and social media, the younger generation started to know about other teams and players, especially after watching them at club-level football. Nowadays we can see diversity among the fans, supporting various teams/countries.

“There are also many fans that support a team just because their favourite player is in that team. For example, many support Argentina and Portugal because of Messi and Ronaldo. Some fans always support the winners. And at last, like our loyal older Argentina generation, there are the diehard fans who have supported a team from the moment they came to know football”, he observed.

For the younger generation of fans in Nagaland, access to live sport telecast comes with multiple options.

“I watch the Euro on my phone in my room. If there is an issue with the internet, then I can easily go out to the other room and watch it on TV”, said Zhapu Angami, a Germany fan, like most Nagas of his generation.

Also, the pandemic has, in its way, altered the experience of watching the game on TV.

“Being able to watch the Euro with my family is a first for me. Usually, I would be out and watching it with my friends but due to this present situation, I realised that watching at home with my family is not bad either. My mother seems confused most of the time, my siblings bet over a packet of noodles every time their chosen team plays. And I think my father and I are the only ones who watch the match seriously”, said Toka Awomi.

“Even though we can’t watch the matches together we can still hear the cheers, shouts of excitement/disappointment, and some even burst firecrackers when their team wins. So though not physically together, we are still keeping the football spirit and community spirit alive”, said a fan from Mokokchung.

Different people of different ages experience sport differently. No narrative is of any lesser value for the foundational tenet of sport remains unchanged.

As put by Lanusunep: “My dad waking me up, carrying me by his shoulder to our neighbour’s place to watch that 1990 final will be a moment to be cherished forever”. A hero found for lifetime.

Editor shares memories: With the headline-grabbing football stars like Pele, Maradona, Messi, Ronaldo, etc., wondering if this generation of football fans remember Albert Roger, a.k.a Roger Milla? If you Google him, you will find that Miller (born May 20 1952) is a Cameroonian former professional footballer who played as a forward. Coming out of retirement for the 1994 World Cup, Milla, then 42-years-old, became the oldest player to score a goal in the World Cup finals. He started his career at the famous academy of Dynamo Beervelde. He was one of the first African players to be major stars on the international stage. He played in 3 World Cups for the Cameroon national team.

He achieved international stardom at 38-years-old, an age at which most forwards have retired, by scoring 4 goals at the 1990 FIFA World Cup and thus becoming the oldest goal-scorer in World Cup history. He helped Cameroon become the first African team to reach the World Cup quarter-finals. Four years later, at the age of 42, Milla broke his own record as the oldest goal-scorer in World Cup by scoring against Russia in the 1994 FIFA World Cup.

Milla is also remembered for his trademark goal celebration of running to the corner flag and performing a dance. In the years that have followed, he has been recognised as a pioneer of the many unconventional and imaginative goal celebrations seen since then. In 2004 he was named by Pele in the FIFA 100 list of the world’s greatest living players. In 2007, the Confederation of African Football named Milla the best African player of the previous 50 years.

Some stars are forgotten nevertheless they continue to shine as brightly as the remembered ones and remain fresh memories to oldies.

(With inputs from Meshinshe Jamir)