“Vote as if your life depends on it – because it DOES!”?- this was famously said by Justin Dart, the man often considered the father of the Americans with Disabilities Act. This is especially true for People with Disabilities. Every policy decision that impact their lives are influenced by whom we elect – from employment to transportation, to the funding of health programmes and social security, accessibility and so on and so forth. Yet, ironically, majority of People with Disabilities are unable to exercise their fundamental right to vote.
Article 21 of the Universal Declaration of Human Rights (UDHR) recognises the right and Article 25 of the International Covenant on Civil and Political Rights (ICCPR) guarantees to all citizens ‘the right and the opportunity … without unreasonable restrictions … to vote and to be elected at genuine periodic elections which shall be by universal and equal suffrage and shall be held by secret ballot, guaranteeing the free expression of the will of the electors’. The right to political participation, including of Persons with Disabilities, is also firmly enshrined in the United Nations (UN) Convention on the Rights of Persons with Disabilities (CRPD) as well as the national Rights of Persons with Disabilities Act 2016.
However, one of the most well-articulated rules of international human rights law is also one of the more frequently denied rights for individuals with disabilities. Society is packed with small and large barriers that prevent full participation for People with Disabilities.
In Nagaland, where the level of awareness and understanding of disability rights is very poor and everything disability is pretty much still running on the charity model, it comes as no surprise that there’s not even any real recognition that people living with disabilities are being denied this fundamental right that belongs to every citizen. We had our state general elections not too long ago and, for the first time ever, some encouraging efforts were made by the Election Department to include eligible voters with disabilities. However, many still could not be registered or were unable to vote. Many again may not get the opportunity to cast their ballot in the upcoming national general elections. 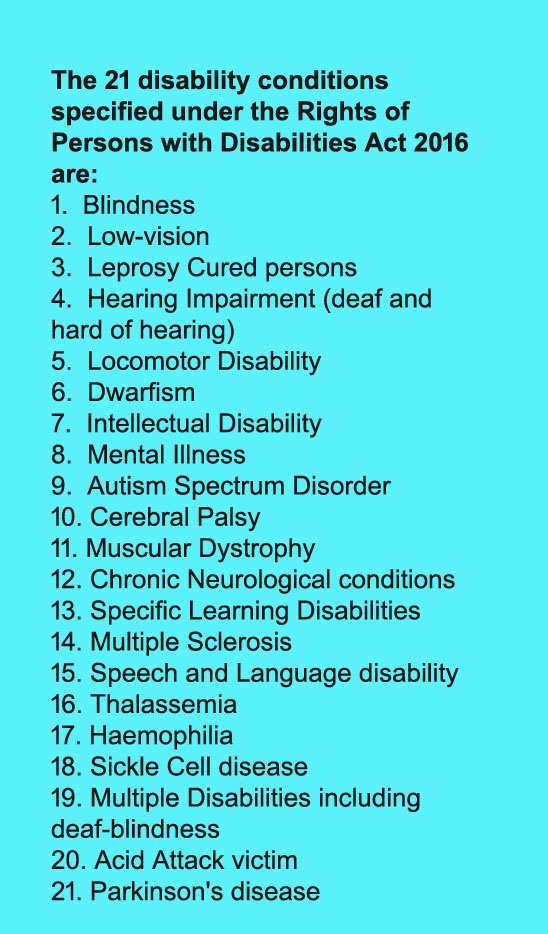 The fact that People with Disabilities are invisible is underlined by politicians and political parties who don’t find it useful enough to talk about disability issues in their campaigns and speeches. Courting the disability community is not important for them since they are not ‘vote banks’ like women or youth or senior citizens. As it stands, the lives and issues of People with Disabilities just don’t matter and this is truly depressing given the bleak conditions they exist in.
The disability vote is seen as inconsequential since it is not a big enough block to benefit the political class like other demographics. So, one way to get those who get elected to positions of power to pay more attention to the injustices faced by the disability community is to enhance their participation in the electoral process.
A significant move in recent years is the endeavour of the Election Commission of India to include Persons with Disabilities in the electoral process under the slogan ‘No voter to be left behind’. The first step towards this is registration of eligible voters. We can talk about accessible voting booths and voting machines, transportation for voters with disability, voting from home, entry passes and so on, but all these become moot unless eligible individuals with disability are enrolled as voters.
The state election machinery has been carrying out special enrolment drives from time to time but so far only about 2500 voters with disability are registered in the electoral rolls, which is obviously very low. Many are not enrolled while some may be enrolled but not identified as a voter with disability. There are many reasons for this, such as Booth Level Officers (BLOs) not being trained properly, lack of disability certificates and reluctance of families to acknowledge disability due to stigma attached to it and a false sense of shame. There is also the fact that disabled people themselves are unaware of their rights as equal citizens. Most people living with disabilities consider themselves as third class citizens who are not counted in anything since they have always been treated as such. Then there are those who may not even know that they have a disability.
Intensive training programmes are being carried out for BLOs in all the districts and more enrolment campaigns will be held. BLOs are tasked with updating electoral rolls in their respective areas. However, for registration of the disability vote to see any improvement, it also needs you. Community leaders, men, women, youth and, importantly, the church – you can help identify eligible voters with disability, talk to families and encourage them to enrol.
It’s all too easy to talk ‘nice’ about People with Disabilities and say that you care. People nod their heads, make appropriate noises to express solidarity and emphatically state their support for People with Disabilities and their fight for equality. Some will loudly declare as unacceptable the existing appalling conditions. But we rarely find anyone following through with needed actions in this regard. Here’s something that you can do to empower the voice of the disability community – help in the identification and enrolment of eligible voters with disability in your areas. In the process, you can even help anyone who you feel has a disability and is not aware get in touch with medical professionals to get certified so that they and their families can get the support they need.
BLOs look after only manageable areas with several households in their respective areas. So, this should not be a major operation. If anyone is able to spare a couple of hours or so to confer with the concerned BLO and talk to a family or two, if necessary, it could go a long way towards getting more voters with disability registered in the electoral roll.
One thing I’ve observed is that people love to bring the Bible into play when talking about People with Disabilities. They quote verses and wax eloquent about love and compassion and, of course, almost always sneak in the overused phrase ‘we are all God’s children’. All these ultimately end up as empty sermons that amount to nothing for people living with disabilities. Nothing changes. If the scripture must be referred to, here’s one that I like. It’s from the book of Mark about the paralysed man who came to see Jesus but could not gain access. Seeing this, the people carrying him cut a hole in the roof and lowered him down to the spot where Jesus was teaching. The way I see it, they cared so they took action. They didn’t sit around mouthing platitudes about how sad it all was or how bad they felt. They cut a hole. The disability community does need this kind of proactive caring and support – people who, for instance, will take action to ensure that schools build ramps and accessible toilets and train their teachers when they see children with disabilities unable to go to school because of the lack of disability facilities which, by the way, are mandatory under law.
Can we find people who care enough to cut a hole in the roof if they have to?

Girls and women of this era should be following their dreams