The people of Nagaland voted their representatives to the Legislative Assembly to look after their necessary development need of the State of Nagaland; -not for felicitation of facilitating the Political Settlement of Nagas of everywhere.
The Naga Society needs realistic introspection and I hope here are some. They are not in sweet tune with the traditional, irrational, unreasonable and unseasonable decisions the decision makers in Nagaland quite often make effortlessly floating in the atmosphere of Nagaland today: An example at hand is the sudden Order of the Government last year of banning the Transport, Sale and Consumption of dog meat in Nagaland the Court promptly struck down as unauthorised and illegal. Such thoughtless superficial decisions do not enhance or magnify the honour of the collective August Body.
The Governor of Nagaland opened the current Assembly Session and repeated a very important message to the Naga people of everywhere: -‘the political Talk between the NNPGs and the GoI is ended on 31st October 2020’, he said.
I hope the honourable NGOs and highly educated Bodies whoever think themselves as somebody, will not get angry with the long suffering Governor for what he had said! The Governor is the ‘Interlocutor between India and the Naga National Political Groups’ and he must have said what he knows.
Yet the august State Body went on felicitating the facilitation it has for the Indo-Naga political solution and made resolutions the Public did not understand head or tail of it, if it were an animal and in spite of all the local Papers reported the story. To whom and to what purposes or to what causes were the Resolution of the felicitation of facilitations were addressed? Except for specific matters, the Political Issue of the NAGA NATION is outside the concise brief of the Legislative Assembly of Nagaland.
It is learned the GoI has already finalized an Agreement with the WG of 7 NNPGs on 17 November 2019.
Then, what is holding up the final Signing of the Naga Political Talk between the GoI and the IM: the Assembly Resolutions do not seem to address any substantive matter specifically?
The resolutions, is reported to have been passed by voice-vote, but the public do not find substantive matter listed in the Resolution except verbose exhortations to impress upon all the NNPGs [Naga National Political Group] to sit together over one and the same Table to thrash out an ‘inclusive and honourable solution for all’!
The Writer remembers a number of times the NNPGs called for face to face Meeting over the same Table to thrash out a common solution, but the present Assembly resolutions appears to have surmised the Groups have not met even once over the last 23 years of their professions that they have made peace with each other ?
The IM still harps on the following demands of theirs as not fulfilled:-
I. Recognition of the Sovereignty of Nagaland.
II. Integration of Naga Areas contiguous to Nagaland State to Nagaland State.
III. A Naga Constitution –YEZAHBO- incorporated into the Indian Constitution.
IV.Recognition of their Political Flag.
V. Recognition of a Pan Naga Hoho in the Constitution of India.
Yet, the Supremo of the IM had publicly, long ago on 27th Sept 2015, declared, “we understand the difficulties of India and they also understand the unique history of the Nagas, this time Integration and sovereignty is not there”
The Public is greatly puzzled, confused, unsure and comprehensive as to whose position, -the Interlocutor-Governor’s or the IM’s, is the real one.
This is because the Naga Public does not know in any details of the Accord. The solution, to the confusion, the puzzlement and to the comprehension in the public is very simple.
The Accord has to be notified one day or the other, sooner or later. Notify it now:-
I. The Government of India declares the Accord has come to effect immediately from the date of this order.
There is no other alternative.
Thepfulhouvi Solo 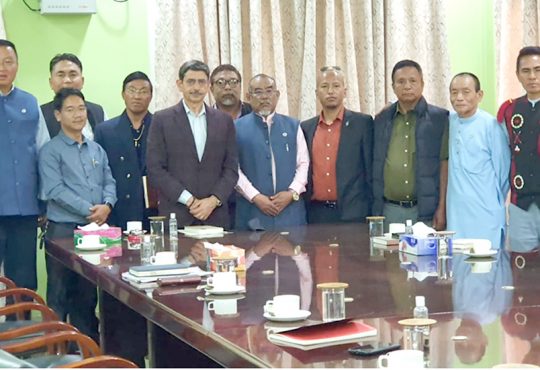