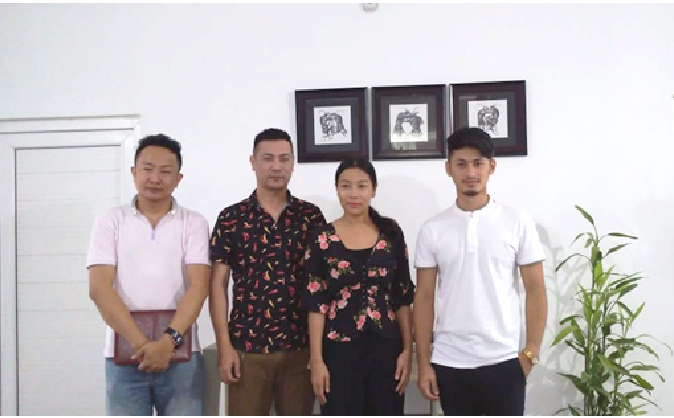 The 3rd edition of Emotive Strings, titled “Emotive Strings: Autumn edition” is happening on September 27 from 6:30 PM onwards at Hotel Acacia with Nise Meruno and Nourhe Khate as the artistes.
This was informed to the media fraternity here at the premises of RS Academia of Music Performance on Tuesday by Director of Musik-A Events Alobo Naga, who was joined by Director of RSAMP Asin Shürhozelie, Principal Violinist Nourhe Khate and Artistic Director Nise Meruno.
Speaking more about the upcoming event, Alobo said that in a time when contemporary music is everywhere catering to the tastes of the younger generation, the other age groups don’t have much to look forward to. The event, however, promotes classical music and is going to fit into the tastes of the entire family.
Meruno added that the event is being divided in three segments i.e., Sacred, Classical, and Contemporary. He continued that there is a wrong perception that classical music is too serious and therefore boring, when it can be fun. He said that through the concert, they want to showcase high quality music and define the difference between trained and untrained musicians.
Nise Meruno is an international concert artiste who was trained in Singapore with Piano as his major, along with voice, conducting and composition. He has performed and conducted workshops in countries like Germany, UK, Hungary, etc. and is also the brand ambassador of two international music companies. He is the first Indian to be labeled as ‘Yamaha Artist’ for Yamaha Pianos, Japan.
Emotive Strings that started in 2017, is the brainchild of Nourhe Khate and was first organized at Kohima. The second edition was held in 2018 at Jotsoma. Khate was the winner of the David Menezes national violin competition in 2014 and is one of the two Indians who received the Rumi Foundation Great Indian Scholarship to study in Trinity Laban for the academic year 2016-2017. He also received the Great India Scholar & Leverhulme Arts Scholar for the academic year of 2017-2018 to complete his Masters in Violin Performance from the prestigious Trinity Laban Conservatoire of Music, London.
Khate on the occasion said that the artistes who would be performing on the day are handpicked and to create awareness to pursue quality music is also an objective of having the concert. He said that with string players still in the primitive stage in the region, awareness is needed and he wants to inspire younger generations.
Asin Shürhozelie, who is also going to perform at the concert along with other supporting artistes like Thunglamo Ngullie, Neilhoukholie Chielie & The Cantamus Choir, also addressed the media.
RS Academia of Music Performance, ADL planners, Symphony Academy of Music, Kohima are supporting the event and it is powered by Musik-A events.