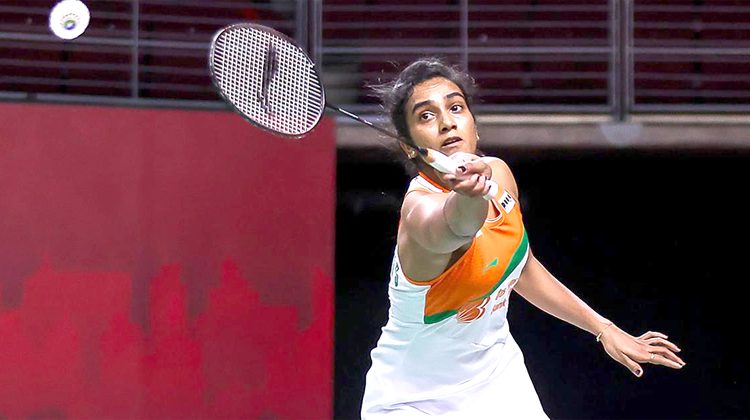 Bangkok, January 21: It was a walk in the park for PV Sindhu as she eased past Kisona Selvaduray of Malaysia 21-10, 21-12 in the second round of the Thailand Open BWF Super-1000 tournament in Bangkok on Thursday.

Men’s singles shuttler Sameer Verma, men’s doubles team of Satwiksairaj Rankireddy, mixed pair of Satwik and Ashwini Ponnappa joined Sindhu in the quarterfinals. However, HS Prannoy and the men’s doubles duo of MR Arjun and Dhruv Kapila lost their second round matches.
While Prannoy suffered a straight game loss against Daren Liew of Malaysia 17-21, 18-21, Dhruv and Arjun failed to put up a fight against Ben Lane and Sean Vendy of England 9-21, 11-21.
Sindhu, meanwhile, took 35 minutes to shut out Kisona. In the quarterfinals she will face the winner of the match between Ratchanok Intanon of Thailand and Ji Hyun Sung of Korea.
Sindhu said that though the match was easy she made some unnecessary errors. “The first game was pretty easy and in the second, I had to play with the wind and really control my strokes. I made some simple errors in the second game and they were ones I should not have made at all. There was too much wind in the second game and I was being careful. This time I was alert from the start and I was remembering last week’s tournament and each point was really important for me. We all win and lose, so I took last week in a really positive way and came in much stronger this week. Overall, it’s a good win and I’m really looking forward to the next round,” Sindhu said.
Sameer Verma registered an impressive victory against Rasmus Gemke of Denmark 21-12, 21-19. Rasmus was the finalist of the Denmark Open, the first tournament held after the pandemic break in October, 2020.
In the quarterfinals, Sameer will face the winner of the Denmark Open, Anders Antonsen. The world No.3 enjoys a 3-1 win-loss record against the world No.31 Indian. Sameer said that he was very confident before the match. “I was very confident before the match. I came prepared. Next up I have Anders Antonsen from Denmark. I’m feeling very confident, so let’s see. It will be tough but I will play my best,” Sameer told the BWF website.
Satwik and Chirag extended their impressive run with a 21-18, 23-21 victory against seventh seeds Solgyu Choi and Seung Jae Seo of South Korea.
“We want to play our game. We want to be at our best. We were lacking in service and returns in the last match,” Satwik said after the victory. His partner Chirag said that they are getting back to their best. “We are getting back to the way we were playing in 2019. Despite the break, we’ve played with each other for a long time. However long we are away from each other, the combination is always set…It will take time to get back to our usual selves, but a month’s practice was good enough for us. We prepared well individually,” Chirag said.
The youngsters will face Ong Yew Sin and Teo Ee Yi of Malaysia in the quarterfinals on Friday.
Earlier, Satwik and Ashwini suffered a mid-match slump before recovering to beat Mark Lamsfuss and Isabel Herttrich of Germany 22-20, 14-21, 21-16. Happy with the victory Ashwini said, “We’re happy that it went well, especially since the conditions are tricky to control. It’s fast on one side and slow on the other. I’m glad that we kept our heads cool and changed our tactics accordingly.” (TNN)