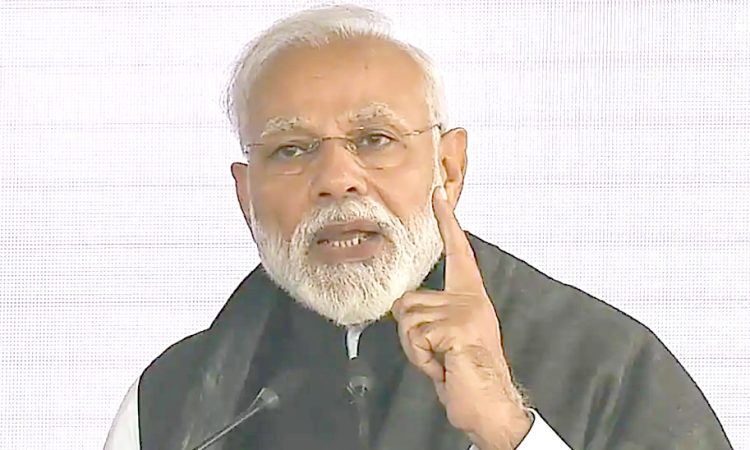 New Delhi, February 15: Prime Minister Narendra Modi on Friday delivered a sharp warning to Pakistan and terror groups operating from across the border after CRPF jawans were killed in a deadly terror attack in Kashmir’s Pulwama.
PM Modi, who was speaking to an event to flag off the country’s fastest train Vande Bharat Express, said the country will give a “strong response” to this attack. The “blood of the people is boiling” and forces behind the act of terrorism will be definitely be punished, he said.
The ruling BJP and the opposition Congress have cancelled all political meetings of its top leaders in light of Thursday’s suicide attack carried out by Pakistan-based terror outfit Jaish-e-Mohammed.
Masood Azhar’s Jaish had rushed to take responsibility for the car bomb that ripped into a CRPF convoy on the Jammu-Srinagar highway. The CRPF has confirmed 38 deaths in the suicide bombing, counted among the bloodiest in Kashmir.
Initial reports, quoting security officials, had said 44 jawans were feared to have been killed in the attack. Pakistan says it isn’t to be blamed for the attack.
But as many countries came together to condemn the deadly attack and Pakistan shrugged off blame, New Delhi underscored that Masood Azhar had been given full freedom by Pakistan to operate and expand his terror infrastructure “and to carry out attacks in India and elsewhere with impunity”.
PM Modi’s message to Pakistan came in this context.
Without naming the western neighbour in his speech, PM Modi said, “if our neighbour, which is totally isolated in the world and thinks it can destabilise India through its tactics and conspiracies, then it is making a huge mistake.”
Turning to the Pak-based terror groups, PM Modi said, “I want to tell the terror groups that you have committed a grave crime. The perpetrators of terror will pay a heavy price. I assure the nation that we will punish the perpetrators of terror.”
Prime Minister Modi, who had minutes earlier chaired a meeting of the cabinet committee on security, also thanked all nations that “have supported us and condemned this incident in the strongest of terms.”
“A strong reply will be given to this attack,” said PM Modi.
“When all the nations will fight together against terror, it will be eliminated. The jawans have sacrificed their lives for the country. I assure everyone that we will take every step to bring the perpetrators of the crime to book,” said PM Modi.
Speaking in Jhansi later, PM Modi said the security forces had been given permission to choose the timing, place and nature of their response to the attack
“Security forces have been given permission to take decisions about the timing, place and nature of their response… This is an India of new convention and policy,” he said, drawing big response from the crowd at a public rally .
The PM said the attack was an outcome of the neighbouring country’s desperation as it is in a bad shape and has been forced to go to different countries with a “begging bowl” to meet even its daily expenses.
The prime minister was in the Uttar Pradesh town to lay the foundation stone of a defence corridor in the Bundelkhand region.
After the morning’s CCS meeting, the government announced that it will take all possible diplomatic steps to ensure the “complete isolation” of Pakistan. Finance Minister Arun Jaitley told reporters that as the first step, this would include India removing most favoured nation (MFN) trade privileges given to Pakistan.
“The ministry of external affairs will initiate all possible steps, and I am here referring to all possible diplomatic steps which have to be taken to ensure the complete isolation from the international community of Pakistan,” he said. (Agencies)