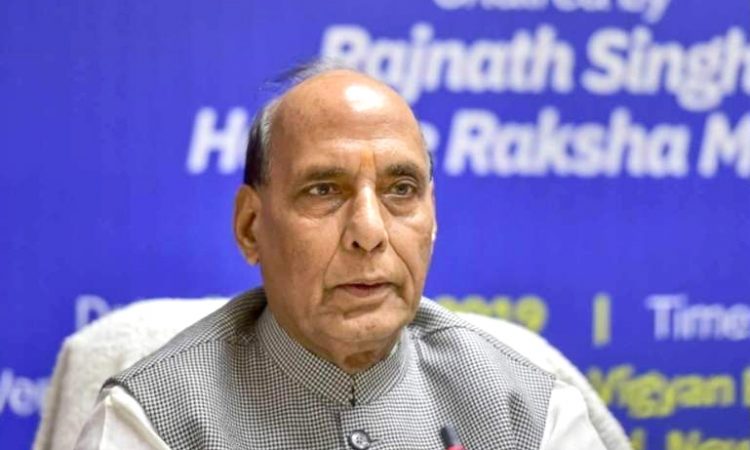 New Delhi, June 16: Terrorism and radicalisation are the “gravest threats” to peace and security in the world and a collective approach is required to combat the challenges, Defence Minister Rajnath Singh said on Wednesday.
In a virtual address at the ASEAN Defence Ministers’ Meeting-Plus (ADMM-Plus), Singh also highlighted India’s concerns over maritime security challenges while noting that developments in the South China Sea attracted attention in the region and beyond, an oblique reference to China’s aggressive behaviour in the critical waterways.
The defence minister called for ensuring a free, open and inclusive order in the Indo-Pacific based on respect for sovereignty and territorial integrity of nations, peaceful resolution of disputes through dialogue and adherence to international rules and laws.

Delving into the coronavirus crisis, Singh said India is just emerging from a second wave of the infection that pushed the country’s medical response to the “limit” and called for a concerted global approach like making available patent-free vaccines, unhindered supply chains and ensuring greater medical capacities to defeat the pandemic.
Referring to the threat of terror networks, Singh called for strong action against those encouraging, supporting and financing terrorism and providing shelter to terrorists, remarks seen as directed at Pakistan.
“Terrorism and radicalisation are the gravest threats to peace and security that the world is facing today,” he said.
The defence minister said India, as a member of the Financial Action Task Force (FATF), remained committed to combating financing terrorism.
“India shares global concerns about terrorism and believes that in an era when networking amongst terrorists is reaching alarming proportions, only through collective cooperation can the terror organisations and their networks be fully disrupted, the perpetrators identified and held accountable,” he said.
ADMM-Plus is a platform comprising 10-nation ASEAN (Association of Southeast Asian Nations) and its eight dialogue partners — India, China, Australia, Japan, New Zealand, Republic of Korea, Russia and the United States.
Talking about the Indo-Pacific, Singh said India has strengthened its cooperative engagements in the region based on converging visions and values for the promotion of peace, stability, and prosperity in the region.
“Premised upon the centrality of ASEAN, India supports utilisation of ASEAN-led mechanisms as important platforms for implementation of our shared vision for the Indo-Pacific,” the defence minister said.
He said the sea lanes of communication are critical for peace, stability, prosperity and development of the Indo-Pacific region.
“Maritime security challenges are another area of concern to India. The sea lanes of communication are critical for peace, stability, prosperity and development of the Indo-Pacific region,” he said.

“In this regard, developments in the South China Sea have attracted attention in the region and beyond. India supports freedom of navigation, overflight, and unimpeded commerce in these international waterways. (
“India hopes that the Code of Conduct negotiations will lead to outcomes that are in keeping with international law, including the UNCLOS (United Nations Convention on the Law of the Sea) and do not prejudice the legitimate rights and interests of nations that are not a party to these discussions,” he said.
China claims sovereignty over all of the South China Sea, a huge source of hydrocarbons. However, several ASEAN member countries, including Vietnam, the Philippines and Brunei, have counterclaims.
On the coronavirus pandemic, Singh said its disruptive effect is still unfolding.
“The virus is mutating fast and testing our response as we find new variants that are more infective and potent. India is just emerging from a second wave that pushed our medical response to the limit,” he said.
“But the disruptive effect of the pandemic is still unfolding. The test is therefore to make sure that the world economy moves on the path of recovery and to ensure that the recovery leaves no one behind. I am convinced that this is only possible if the entire humanity is vaccinated,” Singh said.
The defence minister also talked about India’s deep connect with ASEAN and said New Delhi continued to attach importance to the grouping’s centrality in ensuring peace and stability in the region.
Singh also referred to cyberthreats saying they loom large as demonstrated by incidents of “ransomware, wannacry attacks and cryptocurrency thefts” and are a cause of concern.

“A multi-stakeholder approach, guided by democratic values, with a governance structure that is open and inclusive and a secure, open and stable internet with due respect to sovereignty of countries would drive the future of cyberspace,” he said.
The inaugural ADMM-Plus was convened in Hanoi in 2010. The defence ministers then had agreed on five areas of practical cooperation to pursue under the new mechanism, including maritime security, counter-terrorism, humanitarian assistance and peacekeeping operations. (PTI)