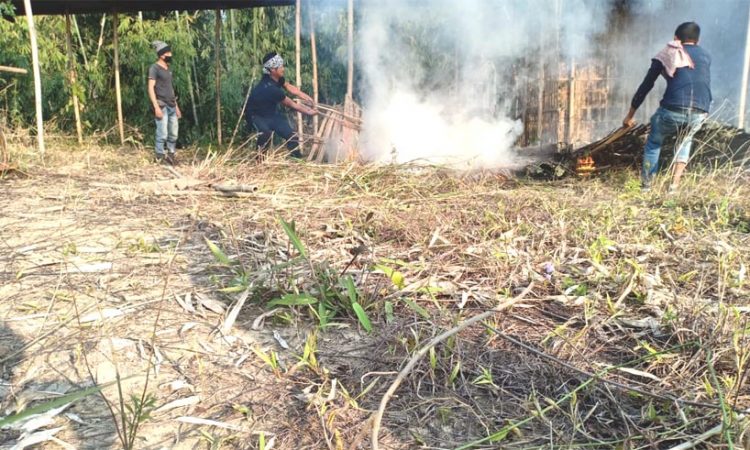 Dimapur, January 24: Fresh tension has gripped the Assam-Nagaland border in Assam’s Jorhat district again on Thursday after Lirmen villagers stopped the move of Assam Police to set up a camp in the border area, which the Lirmen villagers belongs to the village.
The disputed land where the Assam Police had planned to set up a camp is above the Border road under the village jurisdiction, claimed the village authority, Lirmen Senso Mongdang.
On Thursday, Lirmen villagers based on the January 21 decision of the emergency meeting of Lirmen Senso Mongdang against the move of Assam Police to set up a camp above the Border road under Lirem village land went to the spot and destroyed the building materials brought by the Assam Police as well as dismantled the labour shed.
Lirmen Senso Mongdang president I Moatemjen and secretary Imnatongzuk said Lirmen village leaders along with Longchem EAC and a platoon of IRB are camping in the disputed site to thwart any move from the Assam Police to create unwanted situation in the border areas following today’s incident.
Assam police are also camped in the village vicinity on the Assam side of the border, the villager leaders said.
Stating that the land where the Assam Police are planning to set up the camp belongs to Lirmen village and the villagers will stand strongly against any such move, the villagers appealed to all Nagas to support Lirmen village on the issue. It also appealed to the Government of Nagaland to take cognizance of the move of Assam Police and take up the matter with their Assam counterpart at the earliest.
Meanwhile, informing that situation is tense in Tsuremmen (Lirmen ‘B’) village, the Lirmen senso mongdang advised travelers taking this route (Mokokchung-Mariani Road) to be aware of the situation on both side of the Assam-Nagaland border in order to avoid any inconveniences. (Page News Service)