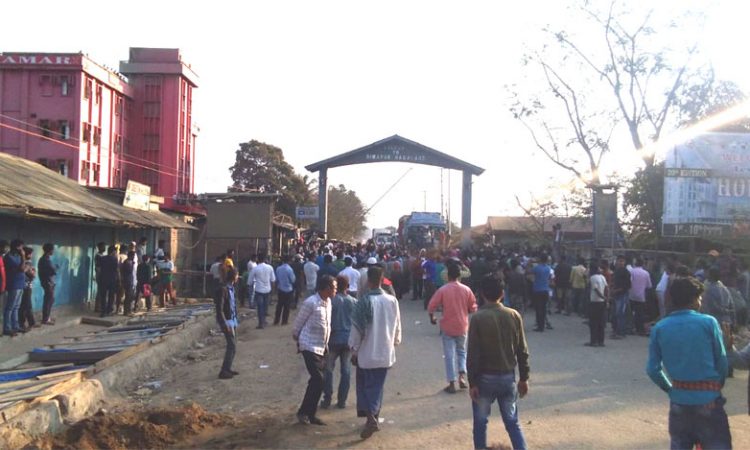 Dimapur, March 1: A lightning blockade against Nagaland vehicles entering Assam from Dimapur over implementation of Inner Line Permit (ILP) in Dimapur created tension along Assam-Nagaland border on Sunday.
The blockade was sparked by the detention of some people entering Dimapur without ILP at the New Field Check Gate here Sunday afternoon.
The Inner Line Permit (ILP) is being implemented in Dimapur since last month. As per rule, anybody entering Dimapur must obtain ILP, or they will be detained and fined.
On Sunday afternoon, police personnel manning the new field check gate detained some people from neighbouring Lahorijan, Karbi Anglong for non-possession of ILP and took them to police station. But this enraged the people living in Lahorijan and Khatkhati areas, who gathered in hundreds near the check gate and blocked passage of vehicles from Nagaland.
The protestors claimed that 67 people were arrested and taken to police station in Dimapur. But this claim was rejected by Dimapur police, who said only 9 were detained and later released without any fines.
Those protesting the imposition of ILP in Dimapur warned that they will not allow any Nagaland vehicles to enter Assam if people from Assam are stopped and detained while going to Dimapur.
The protestors blocked the highway with stones from a nearby construction site and prevented movement of vehicles from both sides.
The commotion continued for more than 2 hours, before the Electoral Officer & Executive Magistrate, Bokajan, Twahhir Alam along with Bokajan SDPO and additional police forces reached the scene to diffuse the situation.
From Nagaland side, top police and district administrative officials also met their counterparts and helped in diffusing the tension. The blockade was lifted at around 5:30 pm Sunday evening.
“They (Nagaland Police) are randomly arresting people, putting them in vehicles and taking them to police stations for non-possession ILP and it has become a sort of sentimental issue for all of us who are residing in border areas of Dimapur,” said a resident of Bokajan while highlighting grievances of those living in the border area to officials of both the districts.
After much persuasion the mobs gathered at the check gate lifted the blockade but issued a veiled threat to the officials saying “this is only the beginning”.
“More such blockades will take place if rectifications are not done by the Nagaland State Government,” screamed out one of the protestors while calling off the blockade.
“If your land is important and precious to you, our lands are also precious. You impose the ILP upon us and we stop everything from Nagaland and traveling to and fro will be next to difficult,” warned another young man who was seen being pacified by officials.
An elderly man who was part of the peace talk with administration of both the districts lamented that his children studying in Dimapur have to opt for ILP. “We are not going to sit silent, solutions should be found out for the betterment of all,” he said.
“The situation is normal and everyone has been sent home. Vehicles are moving and we have taken adequate steps in this regard,” assured Twahir Alam after ending his discussion with SDO (Civil) Dimapur, Zubenthung Ngullie.
Ngulllie also reiterated that situation has normalized and a high level meeting will be convened soon.
When queried about the number of ILP defaulters detained, officer-in-charge of West Police Station, Among said, “We have detained only 9 people and they were released immediately without imposition of fines. It is an awareness too.”
DCP Dimapur 2, Atula, IPS arrived after the dispersal of the crowd and had a discussion with Karbi Anglong police and district officials who were seen waiting at the check gate for an hour after the crowds dispersed.
When queried about the present situation she said, “It is normal now.”
Dimapur Naga Students’ Union (DNSU) and many Naga and non-Naga social activists and student leaders rushed to the New Field Check Gate to diffuse the tension after the news of the blockade flooded social media including WhatsApp with pictures and videos.
(Page News Service)