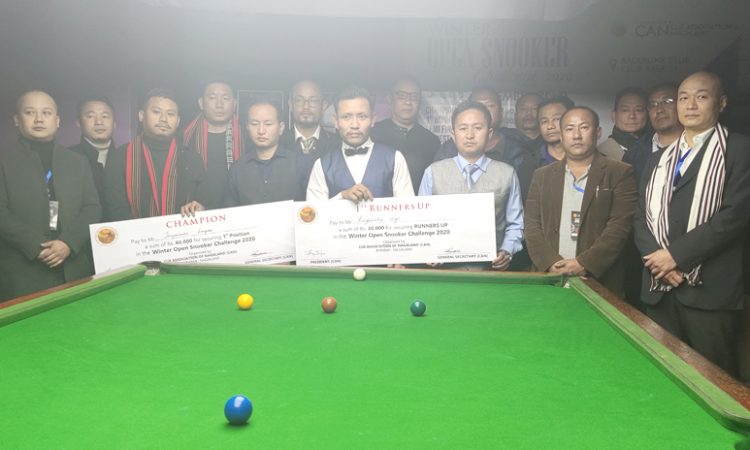 Guest of honour Kezhalelie Keretsu with CAN officials and winners of 1st Winter Open Snooker Challenge at Club Area 51, Kohima on December 12, 2020.

Kohima, December 12: Temjenlemba Longchar today emerged champion of the 1st Winter Open Snooker Challenge organized by Cue Association Nagaland (CAN) at Club Area 51, Jail Colony, Kohima.
He defeated Kezhavituo Vizo in the final.
As the champion, Longchar received Rs 60,000 with certificate and also bagged the highest break point award of Rs 10,000.
Runners-up Vizo got Rs 30,000 with citation while semi-finalists Tonpangkokba Longchar and Ruokuopielie Rutsa received Rs 15,000 each with certificates.
Gracing the occasion as the guest of honour, former Naga wrestling champion and sports enthusiast Kezhalelie Keretsu gave away the awards to the winners.
In his address, Keretsu said Snooker/Billaird though came late in Nagaland has gained much popularity in just a short time.
Snooker is an intricate game which is not about brute physical strength but involves ideas, vision, precision, control and skills- areas where Nagas are no less than the sportsmen from the rest of the world, he said.
The only thing that is keeping us from reaching the national and international platform is the lack of a well laid professional approach, he said, while lamenting that Nagas are very casual in our approach towards almost everything and that is very evident in sports arena too.
He opined that if we are determined enough and give our 100%, many of the players would make it to the national and even international arenas and bring laurels to the Naga people in the near future. “Give your 100% and not give up at 99% because the one single 1% will make the biggest difference,” Keretsu said.
President CAN Yangertemjen informed that 42 players competed in the three day event which started on Thursday. Lauding participants, he asserted that CAN is making efforts to bring coaches from the mainland in order to improve the quality of players in the state.
(Page News Service)