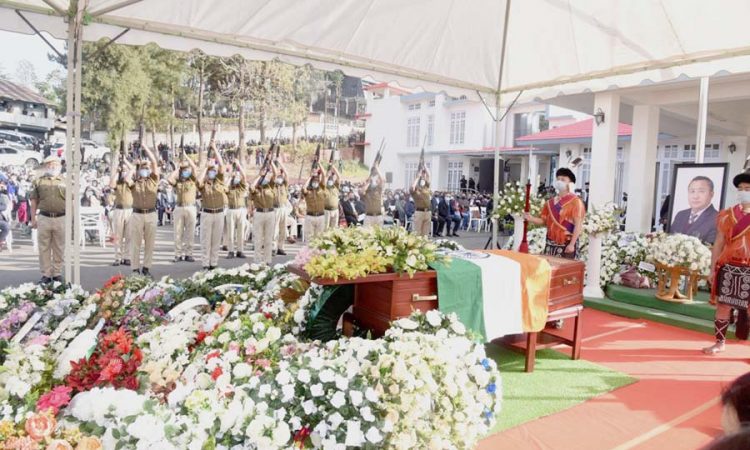 Guard of Honour being accorded to late Temjen Toy during the state funeral service at the Chief Secretary’s official residence, Kohima on January 29 (DIPR)

An irreparable loss for Nagaland: CM

Kohima, January 29: Thousands from all walks of life on Friday paid tearful adieu to Nagaland Chief Secretary Temjen Toy, IAS who passed away on Wednesday after a brief illness.

At the funeral service accorded by the State Government, thousands of mourners led by Chief Minister Neiphiu Rio bade farewell to one of the finest administrators the State has ever produced. A sea of humanity, including many moist-eyed, converged at the Chief Secretary’s Official Residence here for a last glimpse of the departed officer. The service saw unmatched attendance from all walks of life to pay their last respect to the departed soul.
Late Temjen Toy had reached Nagaland on January 11 and rejoined duty on January 18.
Chief Minister Neiphiu Rio recollected his association with late Temjen, describing him as one of the finest and efficient administrator he has encountered. He said late Toy was a humble, upright and dedicated leader, who excelled in all his assignments.
Stating that his demise is a great loss to the people of the State, the CM said the Government and people will always remember late Toy for his contribution.
While he has so much to contribute to the State he has passed away pre-maturely, which is a big loss to the people. His demise is an irreparable loss to the State, he said.
Additional Chief Secretary & Finance Commissioner, Sentiyanger Imchen, IAS, on behalf of IAS Association, also expressed shock and grief over the sudden demise of Temjen Toy IAS. He described late Temjen Toy a “seasoned bureaucrat”, who was known for his administrative skill as evident from his leadership in the fight against the COVID-19 pandemic. He added that the void created by his sudden demise will be felt deeply in the governance of the State.
Former Additional Chief Secretary, H K Khulu recollected his association with late Temjen, saying he had learned many good things from the former Chief Secretary. The former ACS said he had wonderful and memorable days with late Temjen as colleagues and friends. He said the demise of Temjen was a colossal loss to the people of the State.
Among the family members, Rtd Chief Engineer, Lanu Toy, paid a tearful tribute to his son, stating that he has lost the son from whom he had learned many valuable things of life. He thanked the State Government, individuals and well-wishers for constant support and upholding him after he had been diagnosed with illness.
Eulogies were also given by the Ao Senden and Kohima Aor Telongjem. Prominent personalities like I. Imkong, Meyionen, Dr.Kezevito Keditsu also spoke in the funeral service, which was chaired by Chief Secretary, J. Alam, IAS. The Guard of Honour was given by the Nagaland Police.
Late Temjen Toy was 57 and is survived by his wife and four children. Toy, a 1989-batch IAS officer, took charge as the Chief Secretary of Nagaland in March 2018.
In the last couple of months he was under constant medication. He was also flown to the United States for medical treatment.
Political parties, NGOs and several associations have also condoled the demise of Temjen.

The mortal remains of Temjen was later laid to rest at the family’s residence at AG colony here.
All Government offices remained close today in the State capital to let Government employees pay their last respect to the departed soul. Eastern Nagaland People’s Organization (ENPO) also imposed closure of all offices and educational institutions in four districts – Mon, Longleng, Kiphire and Tuensang. Mokokchung also remained closed for the day to pay respect to the former Chief Secretary. (Page News Service)