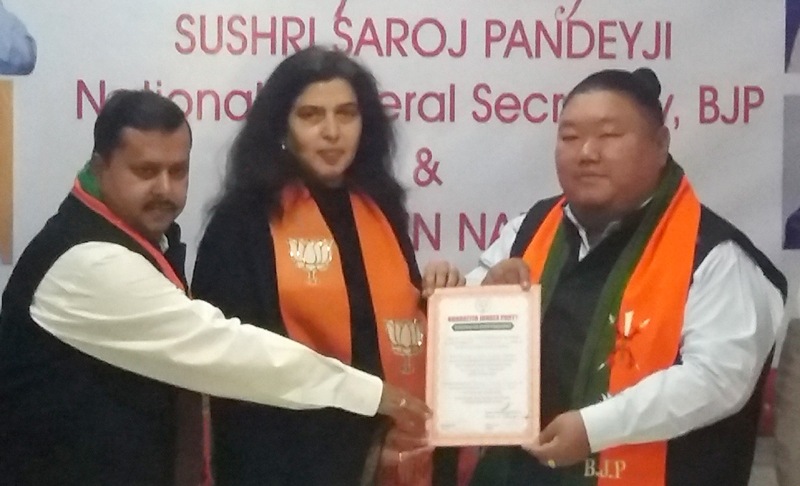 Dimapur, January 14: Minister for Higher and Technical Education and Tribal Affair, Temjen Imna Along, who is also the president of state Bharatiya Janata Party (BJP) was today re-elected as the state BJP president for a tenure of three years.
This announcement was made today at Hotel Saramati by National General Secretary of the BJP, Saroj Pandey. She also announced that Minister of transport, civil aviation and railways, P Paiwang Konyak has been elected as National Council Member. She thanked all the BJP members for their cooperation in completion of the election process.
It may be mentioned that Temjen Imna Along had taken over the presidentship in 2018 replacing Visasolie Lhoungu and today he was re-elected as the state BJP president.
Later talking to media persons, Temjen Imna Along said it was a blessed day for the BJP in Nagaland and congratulated Paiwang Konyak for being elected as National Council member from Nagaland.
He thanked all the state BJP members, district president, morchas and all state office bearers for reposing trust in him. He said the state BJP will work towards uplifting the Naga people and bring better understanding between the BJP Central and Naga BJP. He also assured to work for progress and prosperity of the people in Nagaland.
Replying to a query whether BJP will contest the bye-elections for two seats which went vacant due to demise of two legislators, the newly elected BJP president said NDPP and BJP are alliance partners of the PDA government in the state. “We will keep the principles and continue to keep the alliance together and follow the seat sharing. We will keep the PDA alliance and fight the election with the spirit of the alliance,” he said.
On a query on the Citizenship Amendment Act, the BJP president said it would not ffect Nagaland. Along said Nagaland is protected under the Bengal Eastern Frontier Regulation 1873, which has given the state the right and power to select its citizens.
“Once and all, this should rest for Nagaland,” he said.
He said, “CAA is not an Act to take away our citizenship but it is an Act to apply for citizenship.”
He recalled that Union Home Minister Amit Shah briefed Naga leaders, including state Congress president, NSF and representatives of all political parties, before the Citizenship (Amendment) Bill was passed.
“We were all satisfied what the union home minister had said. But after coming here when we say CAA will not affect us, they are vindictive towards us. That is wrong,” he said.
He said the Act has been politicized and made an issue.
The Nagaland BJP president clarified that the non-Nagas would not get any rights over property, culture, and tradition of the Nagas through the Act.
The minister sought to know how it would affect Naga citizenship.
Saying that Manipur has been given ILP which was not there till a month ago, he said they are happy that their indigenous rights have been protected.
“We have ILP for generations. We are the one who is not implementing it properly. This is the biggest problem. The problem lies within us,” he said.
It may be mentioned that Temjen Imna Along was unanimously elected although there were two nominations filed for the post. Dr Shikato Sema had also filed nominations for the post of BJP president. (Page News Service)