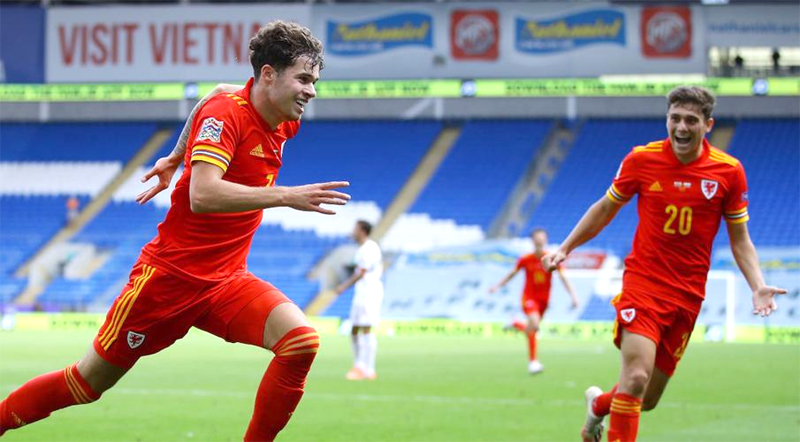 LONDON, September 6: Wales extended their perfect start to the Nations League campaign as Liverpool defender Neco Williams snatched a last-gasp winner in Sunday’s 1-0 victory over Bulgaria.
Ryan Giggs’ side were well below their best for most of the League B, Group 4 tie, but 19-year-old Williams came off the bench to break the deadlock with a header deep into stoppage-time at the Cardiff City Stadium.
Williams’ first goal in professional football made it four successive wins in all competitions for Wales.
Following their 1-0 success in Finland on Thursday, Giggs’ men stay top of the group and are now unbeaten in eight matches dating back to June 2019.
Of the teams who qualified for Euro 2020, none scored fewer than them 10 in their qualifying campaign.
That lack of firepower was a problem for long periods against stubborn Bulgaria, but right-back Williams finally opened up their massed defence on his home debut.
Clearly determined to frustrate the hosts with their cautious approach, Bulgaria finally showed enough purpose to fashion a rare chance when Galin Ivanov’s curling shot deflected narrowly wide off Connor Roberts.
It didn’t help the home side’s cause that Gareth Bale was well short of the drive and sharpness that can only be gained from regular playing time.
Captain Bale barely featured for Real Madrid last season after the coronavirus hiatus as his strained relationship with their boss Zinedine
Zidane left him frozen out.
Bale played just 45 minutes in Helsinki and two games in less than 72 hours was a big ask for the 31-year-old given his match fitness.
His struggles were summed up by a tame free-kick that never threatened to test Georgi Georgiev.
A torrential downpour late in the first half did little to improve the quality of an increasingly error-strewn game.
David Brooks, who missed most of last season after ankle surgery, was named in a Wales line-up for the first time since June 2019.
But Brooks couldn’t keep his volley on target when the ball fell to him after Kieffer Moore’s challenge forced a poor clearance on the edge of the Bulgaria area.
Looking to spark his side into life, Giggs sent on Hal Robson-Kanu as the West Bromwich Albion forward made his first appearance for three years after reversing his international retirement.
Bulgaria’s Yanis Karabelyov headed over from close-range after Wales switched off at the back.
Manchester United winger Daniel James linked well with Brooks to create a sight of goal, but his powerful long-range strike was too close to Georgiev.
James returned the favour moments later, feeding Bale’s pass to Brooks, who hit the top of the crossbar with his left-foot shot.
Wales’ late pressure was rewarded in the fourth minute of stoppage-time when Jonny Williams swung a cross to the far post and Williams powered his header past Georgiev. (AFP)