Kohima, September 4: Nagaland Technical Education Department bid farewell to its Director Arjun Singh, who retired on completion of 35 years service on August 31.
Speaking on the occasion held in the conference hall of the directorate yesterday, Minister for Higher & Technical Education and Tribal Affairs, Temjen Imna Along described Singh as a “gentleman of high caliber” who tirelessly served the department and the people of the State.
“His sincerity and dedication towards his assigned duties and responsibilities are worthy to be noted and honored,” Along said while conveying special thanks to the family of the outgoing Director, for being so supportive during his entire stay in Nagaland, which encouraged and enabled him to serve the people of the State selflessly.
Commissioner and Secretary, Imjung M Panger also conveyed his appreciation and admiration to the outgoing Director for his untiring service rendered to the department.
The outgoing Director Singh sharing his experiences, thanked the State Government for all the facilities provided to him, thereby, enabling him to discharge his duties in the service of the people of the State in various capacities.
He went on to say that Nagas are polite and kind and that Nagaland is the safest place to stay.
Singh joined the Department of Higher & Technical Education Department as lecturer in the Mechanical Engineering Department at Khelhoshe Polytechnic Atoizu (KPA) Zunheboto, in the year 1985.
He was transferred and was made the in charge of Controller of Examination in the year 2000, but was reverted to KPA as a Lecturer in 2003, and was given charge of Principal of the institute in 2006. He was transferred to ICIT Mokokchung as Principal in charge during the early part of 2007, promoted to Principal, and transferred back to KPA as Principal in 2007. He became the Principal of Government Polytechnic Kohima in the year 2008. In 2012, he was promoted to Additional Director and posted in the Technical Education Department, became Director in the year 2016, and successfully completed his 35 years of service, and retired on August 31, at the age of 59 years.
Farewell speeches were delivered by Keyiekhru Rhutso, Principal, Government Polytechnic Kohima, on behalf of the Polytechnic Principals, Dr. Abeni Lotha, Director of Higher Education, and Vipulhou Lhoungu, Officer on Special Duty on behalf of the Directorate of Technical Education.
The speakers congratulated the retiring Director, for successfully completing 35 years of service and thanked him for his selfless contribution made to the Department. They stated that the outgoing Director has come across many challenges but had overcome all by the grace of God, and with the support of the Minister Temjen Imna Along. They wished him a happy and prosperous long life.
Earlier, the farewell program was chaired by Tiakaba Amer, Project Director, invocation was pronounced by David Tsela, Principal in charge of ICIT Mokokchung. The program concluded with benediction pronounced by Principal in charge of Government Polytechnic, Seithekema, Dimapur Zhapulhoulie Rupreo. (Page News Service) 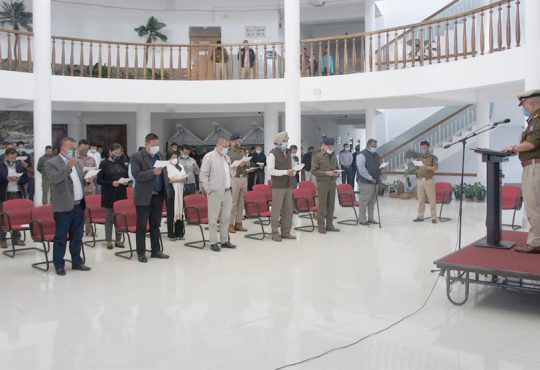