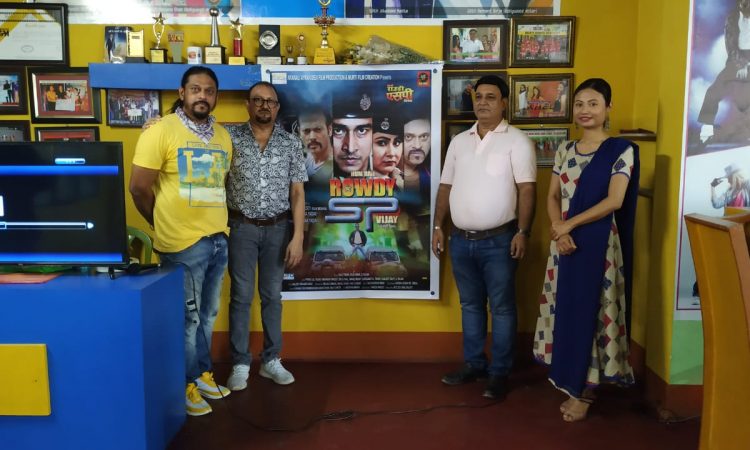 The teaser of Dimapur based filmmaker and proprietor of Murti Films Creations Munna Yadav’s Bhojpuri film, ‘Hum Haii Rowdy SP Vijay’ was formally launched today here at the premises of Murti dance Academy, Khermahal, Dimapur in the presence of actors and well-wishers.
While the release date of the film is yet to be finalized because of the pandemic, the film, which stars Prince Mishra in the lead, Hemant Birje, known for playing the lead role in 1985 Bollywood movie “Adventures of Tarzan”, and other popular faces like Priyanka Pandit, Kalpana, Munna Yadav, Megha Saxena etc. and Udit Narayan as one of the playback singers, is set to have a nation-wide release.
During the launch of the teaser, Guest of Honour Naresh Jain, Director of Sales & Marketing, Everyday Salt, said that it is a matter of pride for the people of Nagaland that someone from the state (referring to Yadav) has stepped out and made such a big movie and wished the team success.
General Secretary of NMDA, Basu Damani, who was present there as a special guest, while extending best wishes to the film, assured every possible support from his side.
Earlier, talking about the film, Yadav acknowledged the contribution of everyone involved in the film.
Produced by Rani Kumari Pandey and Martha Yadav and releasing under Yashi Films Private Limited, the movie is a joint collaboration of Arawali Aryan Devi Film Production and Murti Films Creations.
The storyline of the movie starts in Dimapur and many of the scenes have been shot in Dimapur involving a number of local artists. The teaser is now available on YouTube.
The movie, which will be a part of different film festivals, is expected to get released towards the end of 2020.