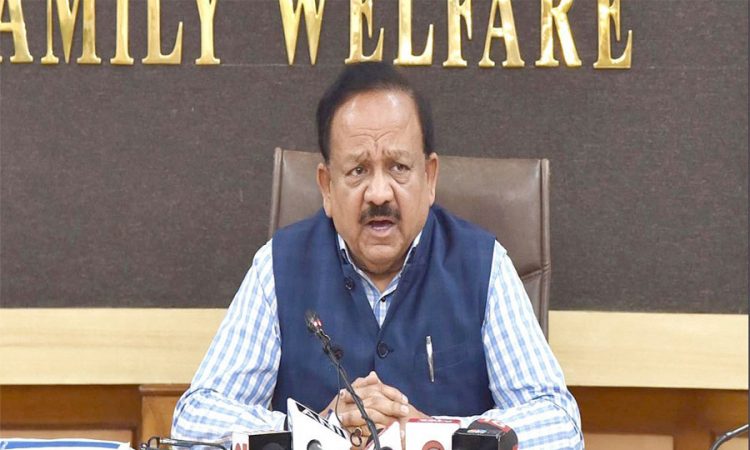 New Delhi, March 18: With an estimated 2.64 million TB patients, India has the largest burden of TB globally in terms of absolute numbers, Union Health Minister Harsh Vardhan said Thursday, adding the disease continues to be one of most critical health challenges facing the country.

He made these remarks while addressing his first Stop TB Partnership’ meet after assuming the Chairmanship of the Board, through video-conference here on Thursday.
The meeting gains additional importance in the run up to World TB Day observed on March 24, a health ministry statement said.
He also stressed on TB as a critical health challenge in India that has prompted the political leadership to target its elimination by 2025.
“Tuberculosis continues to be one of India’s most critical health challenges which may have devastating health, social and financial consequences for the patients and communities at large. With an estimated 2.64 million TB patients, India has the largest burden of TB globally in terms of absolute numbers,” he was quoted as saying in the statement.
Detailing the treatments provided in India and the journey of fight against TB, Vardhan noted that over the past few years, we have significantly ramped up India’s diagnostic capacity for TB .
“Our National TB Elimination Programme has advanced leaps and bounds in the services being provided for TB. The National Program deployed all possible efforts to ensure uninterrupted TB services across the country. Initial responses were focused on essential services such as ensuring uninterrupted supply of drugs for patients on treatment and maintaining diagnostic services,” he said.
Innovative approaches were adopted, including the use of community health workers to aid in specimen collection and transportation and home delivery of TB medicines, he said.
The program was improvised based on need and embraced the use of technology for treatment adherence monitoring, and real-time community-led monitoring initiatives for COVID-19 and TB, he said.
We now have at least one rapid molecular diagnostic facility available in each district and are aiming to decentralize it down to the block level. We have introduced All Oral Regimens and newer drugs for effective treatment of Drug Resistant TB. Our health systems not only focus on the detection and treatment of TB disease, but also try to address all co-morbidities and social determinants of the TB patients and working rigorously towards prevention of the disease,” he was quoted as saying in the statement.
In the last three years, more than Rs 1,000 crores have been disbursed as Direct Benefit Transfer for nutritional support to TB patients, he added.
On the challenges faced by India’s TB Elimination Program during the pandemic, Vardhan spoke on the Rapid Response Plan that was developed and shared with all states and Union Territories.
Bi-directional screening of TB and COVID-19 was initiated to aid in case of finding of both the diseases with 24 per cent of the TB patients having knowledge of their COVID-19 status in 2020.

The Union Health Minister stated India has taken a bold and ambitious decision for a TB-free India five years ahead of the global target, in 2025.
We are planning an extensive nationwide Jan Andolan to enhance awareness about not only the disease, but its treatment with the collaborative efforts of all stakeholders across the centre and States/UTs,” he informed.
Constant engagement with all stakeholders will help us achieve this ambitious goal that we have set for ourselves along with the most productive, efficient and targeted utilization of resources, he stressed. (PTI)