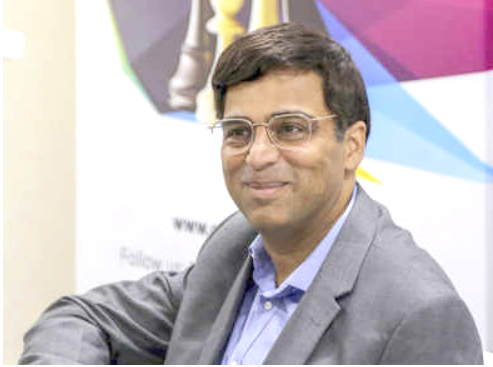 WIJK AAN ZEE (The Netherlands), January 27: Five-time world champion Viswanathan Anand played out an exciting draw with Ding Liren of China to move to joint third spot after the penultimate round of Tata Steel Masters here.
In what turned out to be a theoretical battle, Anand found some fine defensive moves to steer the game to a draw and while the Indian ace can no longer win the tournament, chances of a podium finish remain with just one round to come in the first super tournament of the year.
Reigning world champion Magnus Carlsen of Norway steered clear of the field with another dominating victory over Jan Krzysztof Duda Poland.
The Norwegian took his tally to 8.5 points out of a possible 12 and is now a half point ahead of closest rival Anish Giri of Holland. Fittingly, the two clash in the final round to determine the winner.
The day produced three decisive games in the 14-player double round-robin tournament and making most of the opportunities was American champion Samuel Shankland who crashed through the defenses of Russian Ian Nepomniachtchi.
Vladimir Kramnik scored his second win in a row at the expense of fellow Russian Vladimir Fedoseev.
With Carlsen in front and Giri on his toes, Anand, Nepomniachtchi and Ding Liren share the third spot jointly on seven points apiece.
A half point behind is Vidit Gujrathi holding the sixth spot solely with a final round match slated against Anand.
The Italian opening is the flavor of the season with many big names going for the opening recently. Ding Liren’s choice was not surprising and in fact
contained enough venom as the Chinese blitzed out his moves for quite some time.
Ding Liren came up with a spectacular queen exchange idea but then deferred the recapture of Anand’s queen in favour of some pawns. In the end Anand found a nice resource to hold the balance.
“I assume both of us were just using our preparation; I just forgot some part of mine,” Anand said after the game.
“I am guessing that I should be lost, though I decided, at some point, to stop looking where. And then, I think ’28…Rd6′ is probably a comfortable draw for Black, so he had to try a rook retreat. Whether he was winning or not, I have no idea.”
Gujrathi was on the verge of winning his third game in a row but missed out on a golden opportunity against Richard Rapport of Hungary. (PTI)