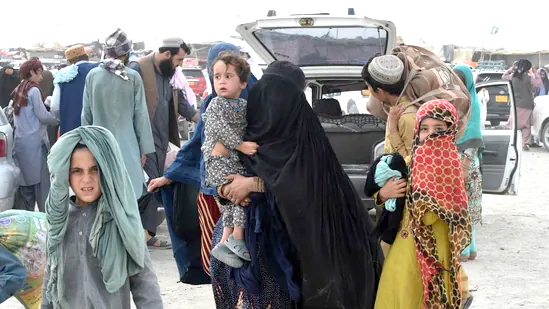 Taliban's demands families marry off girls to their fighters and ordering men to grow beards and go to mosques and revival of its extremist policies in rural areas has filled many women in the cities with dread.(AFP)

Kabul, July 25: The Taliban, who are rapidly gaining territory in Afghanistan as the US withdraws its forces, are demanding that families marry off girls to their fighters and ordering men to grow beards and go to mosques.

During the Taliban’s five-year rule (1996-2001) – which was almost universally shunned by other governments but supported militarily and politically by Pakistan – women were prohibited from working, attending school or leaving home without a male relative. Men were forced to grow beards and wear a cap or turban. Music and other forms of entertainment were banned.
Anyone not abiding by this code risked being publicly lashed, beaten or humiliated. Women who disobeyed these rules were sometimes killed, wrote Sher Jan Ahmadzai, in Asia Times.
Taliban is re-imposing repressive laws and retrograde policies in areas captured by them, they are imposing laws that defined its 1996-2001 rule when they enforced their version of Islamic Sharia law.
During peace negotiations and on visits abroad, the Taliban’s leadership has expressed both a belief that women have rights under Islamic laws and a desire to reduce violence in Afghanistan.
The group has also pledged to protect such public infrastructure as government buildings, roads and schools, which it has often attacked.
But in newly captured areas their policies are more hard-line, says Ahmadzai.
According to reports by the Afghan stations Radio Liberty and Radio Salam Watandar, Taliban rulers in Afghanistan’s north and northeast have asked families to marry off one girl per family to their fighters; said women should not leave home without a male relative, and ordered men to pray in mosques and grow beards.
The Independent Administrative Reform and Civil Service Commission, an Afghan government agency, says public infrastructure has been destroyed and social services halted in many Taliban-controlled areas, leaving 13 million people without public services, reported Asia Times.
All evidence suggests the Taliban still believe in restoring their old system of the emirate, in which an unelected religious leader, or emir, was the ultimate decision-maker. No one could challenge his verdicts because he was believed to have divine authority from God, says Ahmadzai.
“The Taliban don’t believe in democracy. They just want the collapse of the government so they can reconquer Afghanistan and reimpose their system,” Ahmad Rashid, a Pakistani journalist who has covered Afghanistan for 20 years, told Germany’s Deutsche Welle newspaper in July 2021.
The Taliban’s revival of its extremist policies in rural areas has filled many women in the cities with dread.

“I’m worried that women could return to the dark days of the past when we were just housewives and banned from taking part in society, culture, politics, and even sport. What happens when the Taliban takes over the cities? What will happen to women then?” asked Sanam Sadat, an activist in Faryab’s provincial capital, Maimana, which is under government control. (ANI)