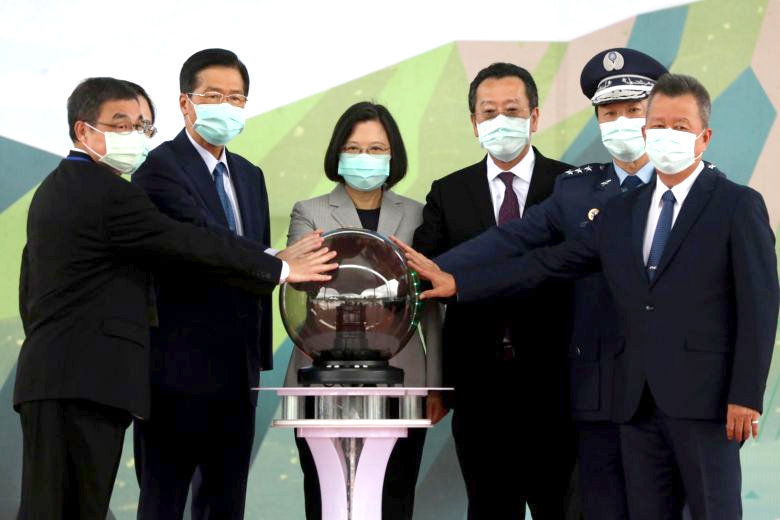 TAICHUNG, August 28: Taiwan President Tsai Ing-wen vowed on Friday to defend the island with a “solid” air force as she launched a US-backed maintenance centre for the island’s fleet of upgraded F-16 fighters amid rising tensions between Taipei and Beijing.
Frequent Chinese and US military exercises in the region are raising fears of conflict touched off by a crisis over Taiwan, which Beijing claims as its own territory.
“It takes solid defence capability, not bowing and cringing, to defend the sovereignty of the Republic of China and maintain regional peace and stability,” Tsai told a ceremony unveiling the island’s first maintenance hub in the central city of Taichung for its most advanced F-16s.
The Republic of China is Taiwan’s formal name.
Tsai said the hub marks a milestone in her years-long drive to build up Taiwan’s defence industry.
“The time needed for jet maintenance will be greatly shortened and availability will be boosted significantly, ensuring the Air Force’s combat power at the front line,” she said.
Tsai has complained of increased Chinese military drills and on Thursday warned of the risk of accidental conflict.
The hub, led by US weapons maker Lockheed Martin Corp and Taiwan’s Aerospace Industrial Development Corp (AIDC), is latest example of military cooperation between Washington and Taipei.
The United States last year approved an $8 billion sale of F-16 fighter jets to Taiwan, a deal that would take the island’s F-16 fleet to more than 200 jets, the largest in Asia.
AIDC’s president, Ma Wan-june, said that the hub would service jets for Taiwan’s air force and that the company plans to expand it as a maintenance hub for F-16s in the region. He declined to elaborate.
The United States has no official diplomatic ties with Taiwan but is the island’s main international backer and arms supplier.
China said last month it would sanction Lockheed Martin for involvement in arms sales to Taiwan.
PLA fires ‘aircraft-carrier killer’ missile into South China Sea amid US spy plane intrusions
For the first time, China has fired its “aircraft-carrier killer” missile into the South China Sea (SCS) as part of the naval drills being carried out by the military in the disputed region amid aerial reconnaissance by US spy planes. China is engaged in hotly contested territorial disputes in the South and East China Seas. Beijing has also made substantial progress in militarising its man-made islands in the past few years, which it says it has the right to defend.
Beijing claims sovereignty over all of the SCS. But Vietnam, Malaysia, the Philippines, Brunei and Taiwan have counterclaims. In the East China Sea, China has territorial disputes with Japan. The SCS and East China Sea are stated to be rich in minerals, oil and other natural resources. They are also vital to global trade.
China launched two missiles, including an “aircraft-carrier killer”, into the SCS on Wednesday morning, a day after US U-2 spy plane entered a no-fly zone during a Chinese live-fire naval drill in the Bohai Sea off its north coast, Hong Kong-based South China Morning Post reported on Thursday. One of the missiles, a DF-26B, was launched from the north-western province of Qinghai, while the other, a DF-21D, (aircraft-carrier killer missile) lifted off from Zhejiang province in the east.
Both were fired into an area between Hainan province and the Paracel Islands, the Post quoted Chinese military sources as saying. Paracel Islands fall in the disputed part of the South China Sea.
The DF-26 dual-capable missile is a type of weapon banned by the Intermediate-Range Nuclear Forces Treaty signed by the US and Soviet Union towards the end of the Cold War. When the US withdrew from the treaty last year, it cited China’s deployment of such weapons as justification, the report said.
The DF-26 has a range of 4,000 kilometres and can be used in nuclear or conventional strikes against ground and naval targets. The DF-21 has a range of around 1,800 kilometres, with the state media describing it the most advanced in the series, and the DF-21D, as the world’s first anti-ship ballistic missile.
The missile launch was aimed at improving China’s ability to deny other forces access to the SCS, the report quoted sources as saying. “This is China’s response to the potential risks brought by the increasingly frequent incoming US warplanes and military vessels in the SCS. China doesn’t want the neighbouring countries to misunderstand Beijing’s goals,” the report said. (Reuters/PTI)