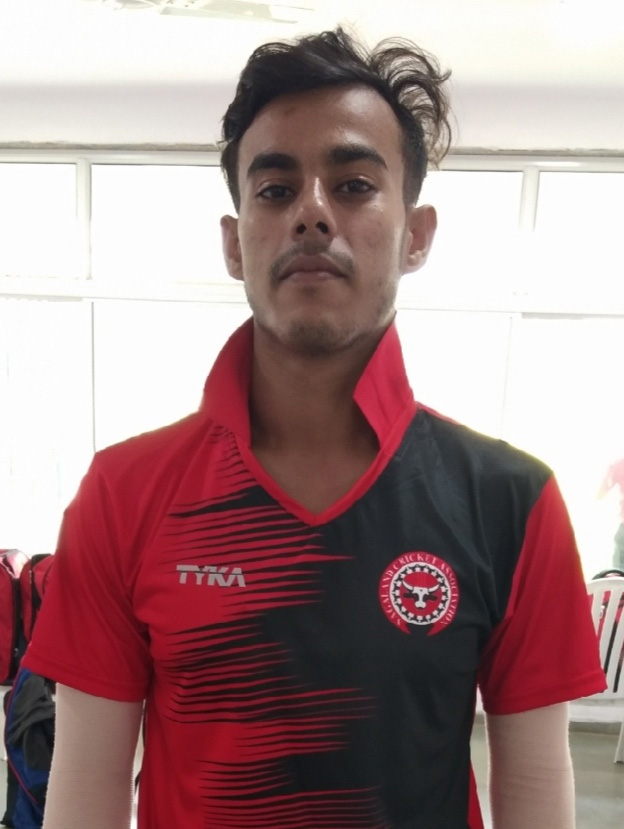 Dimapur, December 7: Youngest player from the Northeast to play Ranji trophy match for Nagaland, Tahmeed Rahman today became the first player from the state to take hat-trick in Ranji trophy match against Manipur in the plate group D teams of Nagaland, Mizoram, Sikkim, Pudducherry, Bihar, Uttarkhand, Arunachal , Meghalaya and Manipur who are all playing First class cricket from this season.
He took the wickets of Manipur players Homendro, William and Kishan in the three consecutive balls. Tahmeed finished the first innings by taking 5 wickets for 108 runs.
On Day-2 of the ongoing match at Nagaland Cricket Stadium, Sovima, Nagaland were 150 for 4 at the close of play in their second innings. Jonathan contributed 59 runs for the team, while K B Pawan at 47 (n.o) and Abrar 24 n.o. were at the crease.
Earlier, Manipur which continued its 2nd day play with an overnight score of 173 for 3 added 163 runs to take the total to 336 before the team was bowled out. Mayank Raghav was the highest scorer with 228 runs, while Yashpal Singh contributed 35 for the team.
For Nagaland, Tahmeed Rahman was the most successful bowler with 5 wicket while Pawan Suyal took 2.
Meanwhile, in the C K Nayudu trophy Men’s U-23 match, Nagaland will play against Pudduchery from December 8 to 11 at Pudduchery.
(Page News Service)