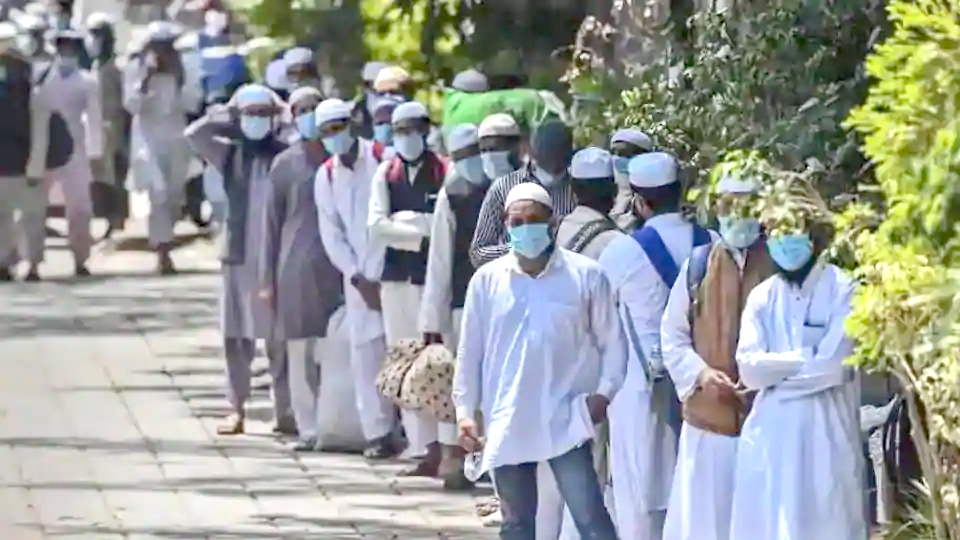 The ministry also said that as many 2,361 persons of Tablighi Jamaat were evacuated by the Delhi Police on March 29 and 233 persons were arrested. (HT Photo)

New Delhi, September 21: The union home ministry informed Parliament that a gathering of the Tablighi Jamaat in March in Delhi, despite orders issued by various authorities after the outbreak of coronavirus, also led to the spread of the virus among many persons.
To a question on whether the gathering was a “major reason” for the spread of coronavirus in Delhi and other states, minister of state for home, G Kishan Reddy informed the Rajya Sabha through a written reply that the spread was also because of the gathering.
“As reported by Delhi Police, despite guidelines/orders issued by various authorities in pursuance of the outbreak of Covid-19 a huge gathering assembled inside a closed premise over a protracted period of time, without any semblance of social distancing or provision of masks and sanitisers. This also caused the spread of Coronavirus infection amongst many persons,” the reply said.
Many foreigners and Indian nationals tested positive for the virus after they had either attended the religious gathering organised by the Tablighi Jamaat in Delhi’s Nizamuddin or come in contact with those who were present at the gathering.
The ministry also said that as many 2,361 persons of Tablighi Jamaat were evacuated by the Delhi Police on March 29 and 233 persons were arrested. It said an investigation against Jamaat chief Maulana Mohd. Saad is underway.
In August, the Bombay high court’s Aurangabad bench struck down criminal cases registered against 34 people, including 28 foreign Tablighi Jamaat members, in Maharashtra’s Ahmednagar district, saying foreign nationals were virtually persecuted.
“A political Government tries to find scapegoat when there is pandemic or calamity, and the circumstances show that there is probability that these foreigners were chosen to make them scapegoats,” said a bench of justice TV Nalawade and justice MG Sewlikar. “The material of the present matter shows that the propaganda against the so-called religious activity was unwarranted.”
The Jamaat, which has followers in over 80 countries, maintained many visitors at its headquarters were stranded after the government declared a lockdown to check the pandemic spread. The Centre blacklisted around 1,500 foreign Tablighi members for violating their visa norms and multiple cases were registered against them across the country. (Courtesy: HT)