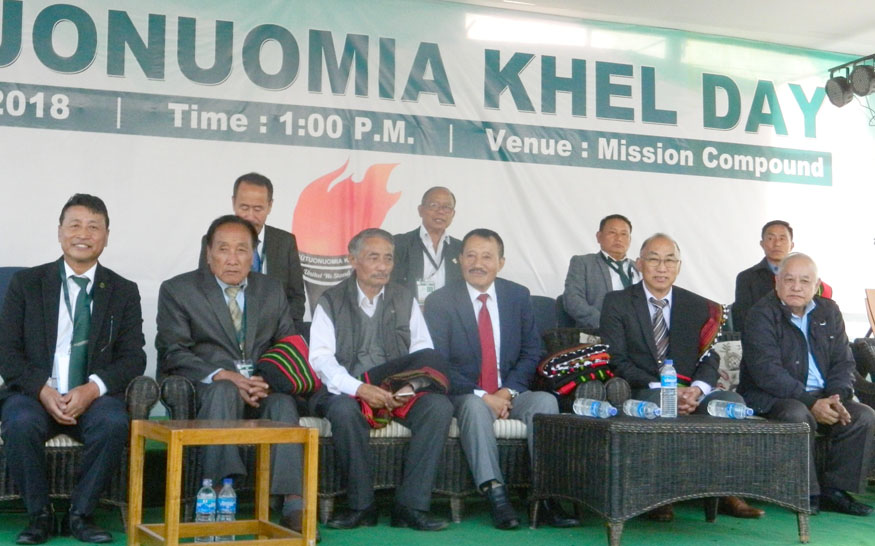 Kohima, October 25: The Tsütuonuomia Khel of Kohima village today commemorated its 39th khel day at Mission Compound here with Chairman of Kohima Village Council, Dr. Neiphi Kire calling upon Kohima villagers to take up the challenge considering the welfare of the future Naga generation by of curbing the influx of illegal immigrants and their engagement in jobs.
Stating that present generation must think and live for the future, Dr Kire in his address to the celebrants said that T Khel has lots of land mainly in the town area and therefore it would be good if the owners of commercial buildings rent their shops to the local entrepreneurs instead of giving it to the non-locals, specially the illegal immigrants.
Expressing fear that Nagaland would face Tripura like situation which would make the future generation suffer, he discouraged employing illegal Bangladeshi immigrants for any form of job. The Kohima Village Council chairman also discouraged selling of land considering the possible demographic change and also rapid increase of population.
Lauding T. Khel forefather for immensely contributing towards the Naga movement and also providing identity to Nagas, Dr Kire recalled that the families of T Khel were also instrumental in laying the foundation of major educational institutions in the capital, including Kohima College and Science College Jotsoma.
Knowledge and education are most important aspect of life and it should be a tool towards peaceful coexistence and harmony within the society, he said.
He went on to state that the strength of Kohima village lies in their unity and hospitable nature because of which other Naga tribes have high respect for Kohima village.
“We have sacrificed our lands for the development of the Capital and learned to be accommodative with other communities,” he said.
Adviser of T Khel Council, Pelevituo Solo while exhorting the gathering said that one must learn to adapt to the changing times.
Lamenting that Naga society is quick in grapping the outside world fashion and practices, he said encouraged Nagas to emulate only the good values of other cultures.
He also said that one must not be a tool of technology but make technology the tool towards achieving better development.
Stressing on the need to safeguard one’s own customs and tradition so as not to lose one’s own unique identity, he also called upon the younger generation not to forget their mother tongue.
Chairman of T. Khel Council, Thepfuvilie Suohu stated that the T.Khel Day is observed triennially to strengthen better relationships among its members and also with the female members married to outside clan.
Chaired by Convenor organizing committee, K Neibou Sekhose the celebration commenced with Deacon Sochülie Solo invoking blessing while special number was presented by Keneisedenuo Zatsu, T Khel Choir and Rongmai Kabui community of Naga Bazaar.
Beside others NPF MLA of 10-Northern Angami-I A/C, Khriehu Liezietsu and the Nepali community also joined the celebrations.
Secretary organizing committee Ruokuoneituo Phewhuo tendered the vote of thanks.
The celebration culminated with mass community feast and T Khel Nite in the evening.
(Page News Service)