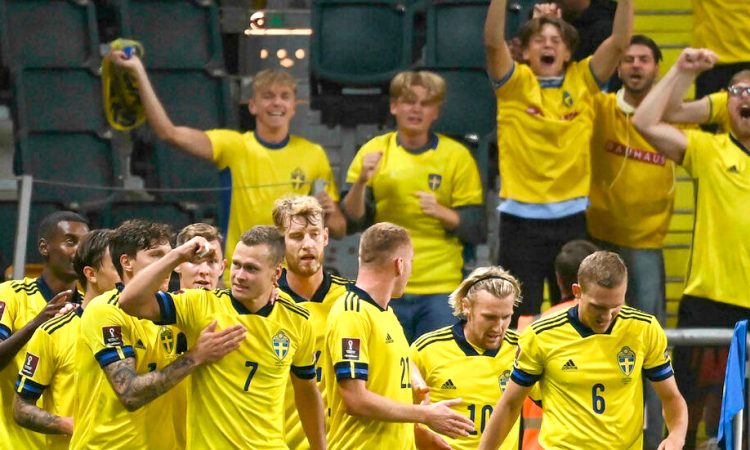 STOCKHOLM, September 3: Viktor Claesson secured Sweden a 2-1 victory over Spain in World Cup qualifying on Thursday for a third win in three games and top spot in Group B.

Valencia midfielder Carlos Soler scored five minutes into his Spain debut, but Alexander Isak replied almost instantly for the hosts in Stockholm.
Claesson grabbed the winner just before the hour as Sweden kept their 100 percent record intact to move two points clear of Spain with a game in hand.
“I think we’re better than what we ourselves believe, honestly. We could have won the match by a lot more. I’m proud. We’re a really good team,” said Sweden winger Dejan Kulusevski.
Defeat for Spain leaves Luis Enrique’s side at increasing risk of entering the play-offs with only the group winners guaranteed a place at the 2022 finals in Qatar.
“We didn’t deserve to lose,” said Spain defender Jordi Alba. “The first half was excellent and it was a shame that they equalised immediately.”
“We have no margin for error now,” he added. “We need to improve things. There’s still a lot to play for, difficult matches — and we need to win them.”
Spain return home to face Georgia on Sunday having made an unconvincing start to the group. The 10 group runners-up will head into the play-offs along with two teams from the Nations League.
The game started promisingly for Spain in front of some 16,000 fans in Sweden as Soler steered in Alba’s cross on the half-volley.
But Soler was partly at fault for Sweden’s equaliser, his pass getting away from Sergio Busquets and allowing Isak to steer in superbly from the edge of the area.
The two nations drew 0-0 in the group stage of Euro 2020, but this was a far more open affair as the pace of Isak, Kulusevski and Emil Forsberg kept the Spain defence on alert.
Juventus attacker Kulusevski, who missed the game against Spain at the Euro after testing positive for Covid-19, had a drive turned away by the foot of Unai Simon.
Sweden goalkeeper Robin Olsen kept the scores level just after half-time when he bravely palmed away as Ferran Torres and Alvaro Morata both sought to apply a finishing touch from close range.
Spain’s inability to clear a corner proved their undoing on 57 minutes.
After a deep cross, the ball was worked back to Claesson who sneaked a low shot between Simon and the near post, notching the decisive goal for the second time in three qualifiers.
Now in pole position in the group, Sweden play Uzbekistan in a friendly this weekend before resuming their qualifying campaign away to Greece on September 8.
Australia thrash China as Oman upset Japan in World Cup qualifying

Australia convincingly beat China 3-0 on Thursday as the final stage of Asian qualifying for the 2022 FIFA World Cup kicked off on Thursday.
The Socceroos’ emphatic win in Doha came hours after Oman had caused a major upset edging past Japan 1-0 in Suita while South Korea were held to a goalless draw by a plucky Iraq side in Seoul.
Covid restrictions made it impossible for Australia to play their opening match in Sydney, but they still started their Group B campaign in style at the Khalifa International Stadium, one of the venues for next year’s event in Qatar.
There are two groups of six nations in the final round of Asian qualifiers for the Qatar World Cup.
The top two teams from each group will qualify for the tournament next year while the third placed teams can still hope to make the cut via an inter-continental playoff.
Kenya-born Awer Mabil put Australia ahead in the 24th minute. China goalkeeper Yan Junling foiled his first effort but Adam Taggart retrieved the ball and set up Mabil for a second chance.
The Chinese hardly had time to recover as Martin Boyle struck two minutes later with an immaculate shot from 20 yards after latching onto a pass from Tom Rogic.
China struggled to get a decent shot on goal while the Aussies wasted chances galore with Mabil, Boyle and Taggart among those missing out.
A third goal looked inevitable and it came in the 70th minute with Mitch Duke making no mistake with an easy poke after Yan parried the ball in his direction while stopping another Mabil effort.
Earlier, Oman upset Japan thanks to an Issam al-Sabhi goal in the closing minutes.
Japan’s shock home defeat in Group B came after the Samurai Blue dominated the earlier qualifying rounds, winning eight out of eight.
After a scoreless first half at a rainy Panasonic Stadium in Osaka, the hosts sent on young stars Takefusa Kubo and Ritsu Doan — both joining the national team after playing in the Tokyo Olympics.
But Oman broke through Japan’s defense several times and Al Sabhi netted the 88th-minute winner — just a few minutes after coming off the bench.
He said it was an “amazing feeling” when he scored the goal.
“Thank God. We got a good result. We worked together very hard,” he told a news conference.
Japanese captain Maya Yoshida lamented the team’s showing.
“We lost as we were supposed to lose,” he said. “Our tempo was bad. Our combination was bad. Really bad.”
Elsewhere, Vietnam surprised Saudi Arabia with a third minute goal by Nguyen Quang Hai in Riyadh but the hosts bounced back with three second-half strikes to clinch a 3-1 win.
Salem al-Dawsari and Saleh al-Shehri scored from penalties and Yasser al-Shahrani also struck a goal as the Saudis grabbed three points.
Saudi Arabia’s Gulf neighbours UAE were held to a goalless draw by Lebanon in Dubai.
Meanwhile, Iraq held South Korea to a 0-0 draw in Seoul while Iran edged Syria 1-0 as the two regional rivals impressed in their opening Group A games.
Iraq played with more attacking intent in the second half, but never posed a real threat. They did however succeed in nullifying the hosts’ attackers, particularly captain Son Heung-min.
“The outcome is very hard to accept,” a visibly upset Son said after the game, which was held without fans because of coronavirus restrictions.
Iran, traditionally slow starters, pipped Syria with captain Alireza Jahanbakhsh scoring off an excellent Mehdi Taremi assist in the 56th minute at the Azadi Stadium in Tehran.

But there was an element of luck involved in the goal as Jahanbakhsh’s shot took a huge deflection from Syria’s Thaer Krouma before finding the net. (AFP)