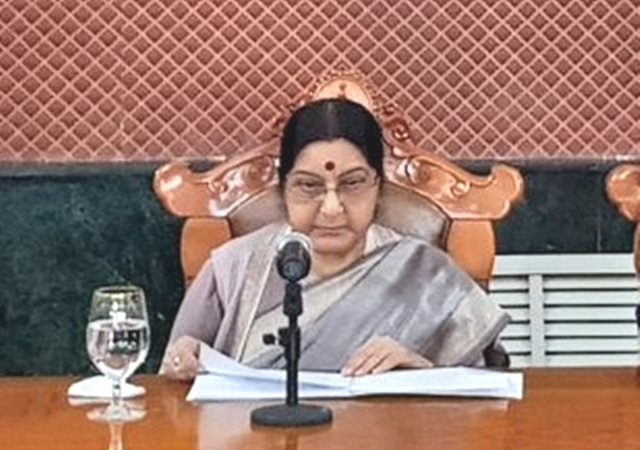 NEW DELHI, August 7: India on Wednesday bid adieu to one of its most admired leaders, former External Affairs Minister Sushma Swaraj as she was cremated with full state honours at the Lodhi crematorium in Delhi.
The military tradition of 21-gun salute was accorded to the late leader.
In a change from the conventional Hindu tradition, her daughter Bansuri was empowered to carry out the last rites.
Swaraj died late on Tuesday after suffering from cardiac arrest. She was 67 years old.
Swaraj was admitted to the All India Institute of Medical Sciences (AIIMS) in a critical condition on Tuesday evening. She was brought to AIIMS at 10:15 pm by her family and was straight away taken to the emergency ward, soon after which she died.
Prime Minister Narendra Modi, top leaders Rajnath Singh, Amit Shah, JP Nadda and Vice President M Venkaiah Naidu were among a sea of leaders across the political spectrum to be present at the crematorium to pay their last respects to the remarkable politician. Former Bhutan PM Tshering Tobgay was also present along with the leaders.
Her mortal remains were shifted to the BJP Headquarters around noon after being kept at her residence since the previous night.
As the mortal remains were being taken away, the former minister’s husband Swaraj Kaushal and their daughter Bansuri paid their tributes with a salute.
Extremely emotional scenes were witnessed at the residence of Sushma Swaraj earlier today as Prime Minister Narendra Modi, LK Advani among other top leaders broke down after meeting her family members.
A star minister during Modi government’s first stint, Sushma Swaraj, who had a kidney transplant in 2016, did not contest the 2019 Lok Sabha elections on account of her health.
Hours before her death, Swaraj had put out a tweet congratulating Prime Minister Narendra Modi after the Centre’s bold move to revoke special status for Jammu and Kashmir and bifurcate the border state into two Union Territories secured Parliament’s approval.
“Thank you Prime Minister. Thank you very much. I was waiting to see this day in my lifetime,” she said.
Elected seven times as a Member of Parliament and three times as Member of the Legislative Assembly, Swaraj served as the Minister of External Affairs of India in the first term of Narendra Modi’s government. She was the second woman to hold that office after Indira Gandhi.
As the EAM, she was always accessible to Indians who needed help abroad. In fact, Sushma gave a humane face to the foreign ministry.
Swaraj also became the youngest Cabinet minister of Haryana in 1977 at the age of 25. (Agencies)