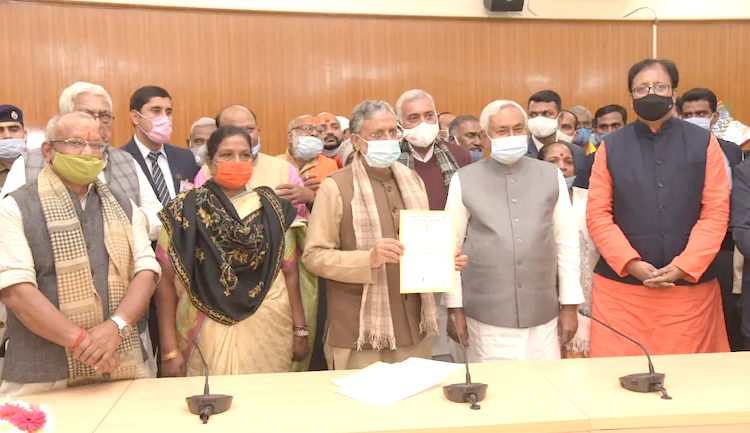 Patna, December 7: Former Bihar Deputy Chief Minister and senior BJP leader Sushil Kumar Modi was on Monday declared elected unopposed to the Rajya Sabha in a by-poll that was necessitated by the death of Union minister and Lok Janshakti Party founder Ram Vilas Paswan.
Modi was handed over his certificate in presence of a host of dignitaries including Chief Minister Nitish Kumar, with whom the former is known to enjoy an excellent rapport, his successors as Deputy CM Tar Kishore Prasad and Renu Devi and state BJP president Sanjay Jaiswal.
Modi was declared elected unchallenged on the last date for withdrawal of nomination papers.
With his election to the Rajya Sabha, Modi has come to hold the rare distinction of having been a member of both Houses of Parliament as well as the bicameral legislature in the state.
Sushil Modi has become the only well-known leader from Bihar to have achieved the “feat” after his bete noire Lalu Prasad.
In addition to the former Deputy CM, only an Independent candidate Shyam Nandan Prasad had filed his nomination papers which were rejected during scrutiny since he could not garner support of at least 10 members of the 243-strong assembly which was mandatory, poll officials said.
Coming out of the office of Patna Commissioner after collecting his certificate, Sushil Modi thanked Prime Minister Narendra Modi and other central leaders of his party for giving him opportunity to serve people of Bihar in different capacity.
He extended special thanks to his former boss Nitish Kumar for boosting his confidence through his presence during filing of nomination as well as receiving certificate after getting elected to Rajya Sabha.
Talking to reporters, Modi said he would continue to work for the development of Bihar by pursuing its interests as a member of Rajya Sabha.
Since November 2005 when he first became the Deputy CM, Modi has been a member of the legislative council.
He had returned to state politics giving up his Lok Sabha seat of Bhagalpur which he had won in the 2004 general elections.
Having cut his teeth as an active ABVP activist in the 1970s, Modi had begun his career in mainstream politics as an MLA from the now abolished Patna Central constituency two decades later.
In the states political circles, it is being noted with bemusement that Modi has emulated RJD supremo Lalu Prasad by getting elected to both Houses in Parliament and the state legislature like him.
Known to the jailed RJD president since the pre-Emergency era when they were prominent leaders of the Patna University Students Union, Modi had earned his spurs with his relentless activism against Prasad after he became the Chief Minister of Bihar in 1990.
The BJP leader was one of the petitioners on whose PIL the Patna High Court ordered a CBI probe into the fodder scam.
Prasad has ended up behind bars after conviction in a number of cases relating to financial irregularities that took place in animal husbandry department while he ruled the state.
Modis relentless attacks on Prasad over benami land transactions allegedly involving the RJD supremo and his family members played an instrumental role in the return, to the NDA, of Nitish Kumar who became disgusted with the controversy which also involved his then deputy Tejashwi Yadav.
Recently, the wily RJD chief found himself in the soup when Modi made viral on the social media a call made by Prasad, while in custody at Ranchi, to a newly-elected BJP MLA here whom he tried to entice with a ministerial berth in exchange for helping the opposition defeat the NDAs candidate for the Speakers post.
The NDA candidate, Vijay Kumar Sinha, known to be close to Modi, went on to win comfortably.
The RJD, which had been sore over the incident, had tried to provoke the Lok Janshakti Party to contest the by-poll necessitated by its founders demise and came out with the offer of support if the late leaders wife Reena Paswan entered the contest.
However, her son Chirag who heads the party turned down the offer saying his father had got elected to the Rajya Sabha “from a seat that belongs to the BJP, which must decide whom to field”.
The deceased leader had got elected last year in a Rajya Sabha by-poll necessitated by his cabinet colleague Ravi Shankar Prasad getting elected to the Lok Sabha. (PTI)