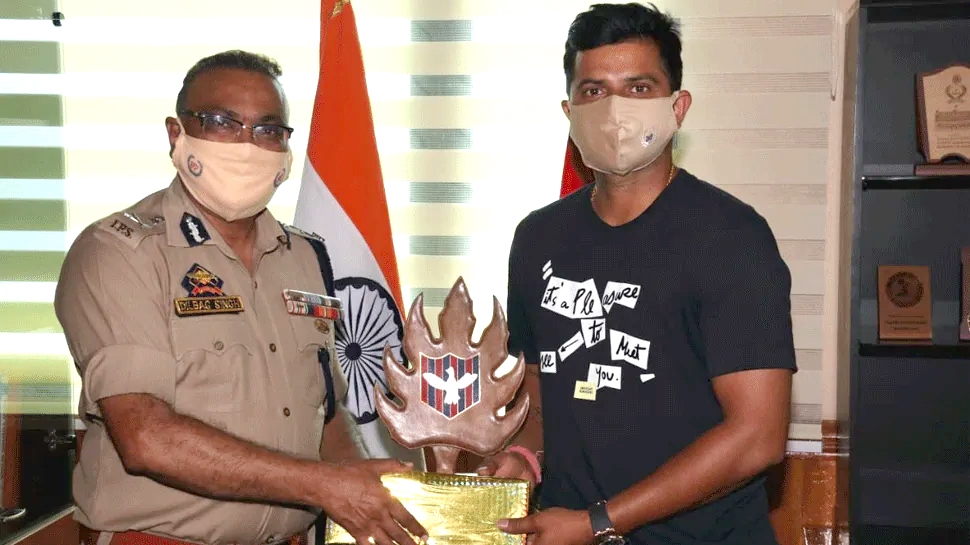 SRINAGAR, September 18: Indian cricketer Suresh Raina on Friday (September 18, 2020) called on Jammu & Kashmir DGP Dilbag Singh in Srinagar and discussed a series of plans of the state police for honing the sports skills of local Kashmiri youths.
The J&K Police wants to engage Raina in encouraging local Kashmiri youths in honing their sports skills. Raina had earlier volunteered to meet and guide some state-level and local cricket teams in J&K.
Wanting for an opportunity to help and polish the cricketing skills of the underprivileged but talented kids of the Union Territory, Raina had offered to promote cricket in Jammu and Kashmir.
The former Indian cricketer, who recently retired from international cricket, had said that his intention behind the initiative is to find out the talented youngsters or children from various parts including schools’ colleges and rural areas of the Union Territory.
“My intention is finding out the talented youngsters or children from various parts including schools’ colleges and rural areas of J&K. I would like to use this opportunity to find the right talented children and polish their skills and contribute to the national team as a treasure for future cricket teams,” Raina said in a letter written to J&K Director General of Police (DGP) Dilbag Singh.
Congratulating Raina for his successful career just before his retirement, the J&K Police had invited him to develop cricketing skills of the Union Territory (UT).
It further said, “We are expecting you to work with us in developing the cricketing skills of the youth of #Jammu and #Kashmir. Looking forward to see you with our youth here .DGP J&K Sh Dilbag Singh & other ranks of #JKP extend best wishes for your next innings”. (Agencies)