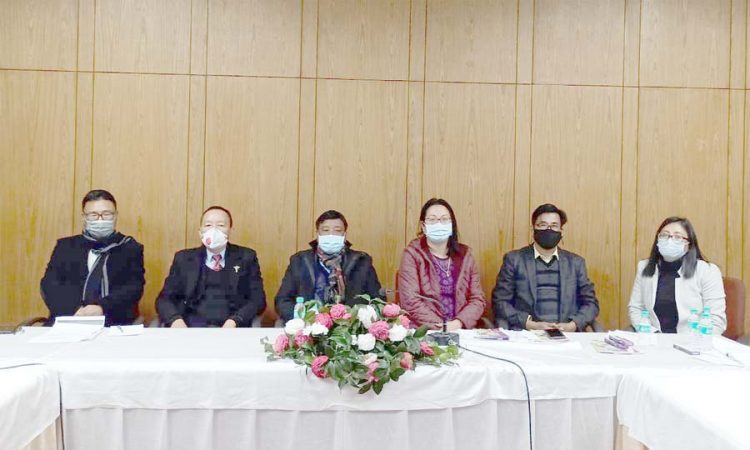 Kohima, January 22: Nagaland Government doctors will launch agitation from January 25 in protest against non- fulfillment of pending demand for enhancement of superannuation of age.

The Nagaland In-service Doctors’ Association (NIDA) said despite repeated memorandums submitted to the State Government to address their demand, it has been kept in cold storage.
The first phase of protest will be wearing a black arm bands from January 25.
The association said they have been demanding enhancement of superannuation to mitigate the manpower gap in the State’s health sector but this has not been taken into consideration by the Government. The doctors said this would meet the shortage of doctors in the State.
“NIDA will wear black arm-bands from January 25 in order to register our resentment against the failure of the State Government for non-implementation of the superannuation age of medical doctors in the state to 65 years,” NIDA president, Dr E Phyantsuthung Patton announced at a press conference here at Hotel Japfu, Kohima on Friday.
“We are only going to put black bands on our arms without disrupting the delivery of healthcare service in any manner. We are well aware that the vaccination drive is in full swing and we have no intention of disrupting the vaccination drive,” he clarified.
Dr Patton said with the COVID-19 pandemic exposing the frailties of State’s health care infrastructure and the acute shortage of manpower, the Government had to struggle to make quick remedies, adding it has succeeded in filling some gaps for a short term period.
Four years have passed after Indian Prime Minister Narendra Modi announced that the Central Government has decided to enhance the superannuation age of all doctors in Central Health Service to 65 years with effect from May 31, 2016, on account of the acute shortage of doctors in the country and also to retain the experience of the medical doctors for a longer period. However, the Government of Nagaland is yet to implement the package that was promised by the Prime Minister, said the NIDA president.
The NIDA had earlier written to the State Government on August 17, 2016 for enhancement of superannuation age but there has been no response from the Government.
The association maintained that retention of senior doctors was one of the strategies to address the skewed doctor population ratio in the State. While there are 1,118 doctors registered in the Nagaland Medical Council as of January 14, 2020, the total requirement of doctors in the state is 2,073. Out of the 1,118 registered doctors, 538 doctors are in the public sector and about 200 are retired.
Giving an account of the reply given by P&AR, Patton said their reasoning on why they will not raise the superannuation age was, “There are no unfilled vacancies owing to non-availability of applicants.” This basically means that non-availability of qualified doctors is not a reason for causing non-filling of vacancies, he added.
He explained that the reasoning of P&AR was if the superannuation age of the medical doctors were enhanced there would be too many backlogs of unemployed doctors but according to the figure of the last recruitment drive, the number of applicants was less than the number of posts available.
Joint Director, Health & Family Welfare Department Dr Z Kheshito Zhimo said that with the upcoming

Medical Colleges at Kohima and Mon, it will be a tragedy for the State Government with severe shortfall of medical doctors. He said a minimum of 150 doctors, inclusive of specialists, per medical college will be required, totaling the requirement to 300 doctors. This will further the shortfall of doctors in the public sector given the present scenario, he added.
Last year Government had to undertake recruitment of doctors and nurses to meet the challenge of COVID-10 pandemic, but still there is a shortage of doctors and healthcare workers in the State. (Page News Service)