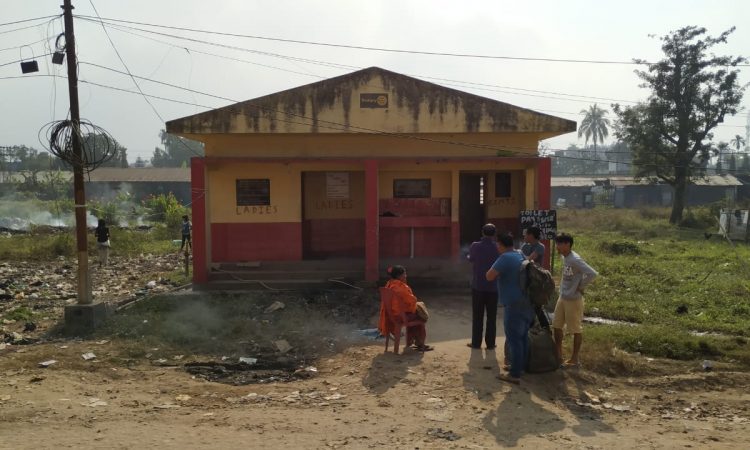 Dimapur, December 18: In the fight against open defecation in the state, the area surrounding Naga Shopping Arcade, Super Market, Dimapur continues to pose a grave challenge that no one seems to notice, as the state tries to achieve the target of being declared open defecation free.
Super Market is one of the busiest places in the commercial hub of Nagaland, with a number of expos, bazaars, and carnivals happening all around the year, and yet the Naga Shopping Arcade, which comprises a great part of the Market, doesn’t even have a single public toilet other than one constructed by the Rotary Club and a few privately managed pay and use toilets that are not enough.
In the absence of public toilets, the open spaces, nooks and corners, and walls adjoining shops and residential areas have become spots for open defecation. No arrangements of toilets have been made for the huge crowd that gathers in the area for Wednesday Bazaar and every night during the Night Carnival that is underway, and thus, they are forced to urinate in open, anywhere and everywhere, much to the inconveniences of the tenants who complain of continuous stench among a number of other issues that they are waiting to get resolved.
It may be mentioned here that on October 2 last year, PHE Minister Jacob Zhimomi announced that Nagaland had become the 22nd State in the country and fourth in the Northeast to be declared Open Defecation Free State (Rural) and assured that attempt would be made to make Nagaland ODF by 2019 along with the rest of the country.
Interacting with the media fraternity on Wednesday here at Press Point, Super Market, the members of Tenants’ Association of Naga Shopping Arcade (TANSA) said that each block of the Arcade was supposed to have two public toilets each, but not one is functioning now as they have all been rented out and converted into residential spaces. The Arcade has more than 70 blocks.
They grieved that they are paying a 15% service charge on the rent per month but fail to see any maintenance work being carried out, as the place is becoming more and more vulnerable to theft and in the last month alone three instances of theft had come to light and on two instances in the past few years the Post Office was attacked by the thieves.
The tenants complained that instead of addressing the issues, the rent was increased by 90% in April 2019, which was not acceptable without any improvements and thus a letter was written to the Chief Minister which, according to them, “unfortunately couldn’t reach.” In the month of November, TANSA registered an appeal in the High Court against the enhancement of rent and the court issued a stay order.
“We are not against enhanced rent, but against enhanced rent without facilities,” one of the tenants said.
The tenants are also annoyed at the “abnormal” electricity bill that they receive each month and revealed that that the electricity department has “outsourced” the service to the Development Authority of Nagaland, which maintains the Arcade, and DAN has separate charges than the electricity department, and thus even if a meter doesn’t move throughout the month, they ought to pay a fixed amount which can be as much as a fixed price of Rs 1200.
They complained that even the responsible persons don’t come one time to check the meters for the preparation of bills and as late as they get, the meters exceed certain limits, resulting in increased rate of per consumed unit of electricity.
In one case, the room that contains the meters of several blocks of the Arcade is cut off from reach due to several feet of stagnant water, and thus, instead of looking at the numbers on the meters, the persons come up with a random number of units consumed per month and prepare the bills accordingly.
The other issues that the tenants of the Arcade complained about are the condition of roads, the stagnant water submerging a number of residential and shopping spaces, the pathetic condition of the bus stand, and complete absence of any form of security allowing the place to become a “free zone” where gambling happens openly till morning when the deadline for the Carnival is 10 PM.
They said that the Arcade, which was supposed to be for local educated employed where no illegal business could be carried out, but now due to liquors and gambling, the place shoos away well-intentioned businesspersons and the festive seasons which could give the shops some sort of increased revenue, is being destroyed by the carnival.
A cursory look around the Arcade reveals water pipes dangerously extending and leaning several meters from the buildings above the ground floor, unauthorized garbage disposal sites, and urinal points in the middle of public spaces.
Besides rent, according to TANSA, DAN generates revenue from the Arcade in the form of service charges, from Town Hall and taxing the entering autos (because of which many declines going into the area). DMC and GBs levy other forms of taxes on the shops.
According to an RTI report TANSA produced, there are presently 124 staffs for the Arcade including nine chowkidars whose whereabouts are not known. It is believed that DAN generates revenue of 17 lakh rupees per month from the Arcade, at the same time, pays a salary of 34 lakh rupees to the staff.
(Page News Service)