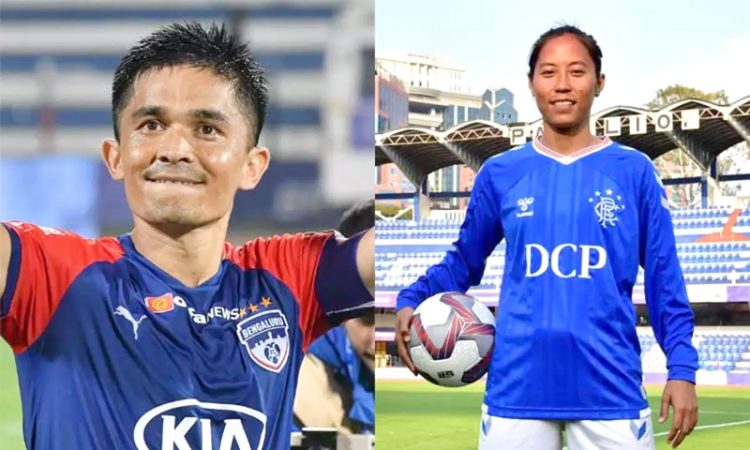 National women’s football team striker Bala Devi, who is currently playing for Rangers in the Scottish Women’s Premier League, has been recommended for the coveted Arjuna Award.
“We have recommended Sunil Chhetri for the Khel Ratna and Bala Devi for Arjuna Award,” an official source told PTI on condition of anonymity.
“We have also recommended Gabriel Joseph for the Dronacharya Award,” the source added.
The 36-year-old Chhetri has been in tremendous form for the country and for his club Bengaluru FC in the last few years. He has played 118 international matches, scoring 74 goals, both Indian records.
He scored twice against Bangladesh in the recent World Cup Qualifiers in Qatar to become the second highest international goal scorer among active footballers, ahead of Argentine maestro Lionel Messi.
He is, however, currently in the fourth spot with United Arab Emirates’ Ali Mabkhout (76) and Messi (75) having overtaken him.
Chhetri is a recipient of Padma Shri (2019), the country’s fourth highest civilian honour, and the Arjuna Award (2011).
Since making debut in 2005, Chhetri has been part of Indian team that won the AFC Challenge Cup (2008), SAFF Championships (2011, 2015), Nehru Cup (2007, 2009, 2012), Intercontinental Cup (2017, 2018). He also played in the 2011 and 2019 Asian Cup.
The 31-year-old Devi, on the other hand, became the first Indian woman footballer to play for a top-flight PROFESSIONAL league in Europe when she joined Rangers of Glasgow in January last year.
She has played more than 50 matches for the country since 2010 and will play an important role in the national team during the AFC Women’s Asian Cup to be hosted by the country next year.
BCCI to recommend Mithali Raj, R Ashwin for Khel Ratna
The BCCI has decided to recommend women’s cricket great Mithali Raj and premier spinner R Ashwin for Rajiv Gandhi Khel Ratna, country’s highest sporting honour.
For Arjuna Award, the Board will send the names of senior batsman Shikhar Dhawan, who was ignored last year, K L Rahul and pacer Jasprit Bumrah.
“No women cricketer has been nominated for Arjuna. Mithali’s name has been recommended for Khel Ratna,” a BCCI official told PTI on Wednesday.
It remains to be seen if Mithali is chosen by the Sports Ministry-appointed panel in an Olympic year.
She completed 22 years in international cricket last week. The 38 year-old is also the leading run getter in ODIs with more than 7000 runs.
Ashwin, who is already an Arjuna awardee like Mithali, has also been a consistent performer for India in Test cricket. He has taken 413 wickets in 79 Tests besides 150 and 42 scalps in ODIs and T20s though he doesn’t play for India in the shorter formats.
Dhawan, who will be captaining India in the upcoming limited overs series in Sri Lanka, is a frontrunner for Arjuna.
The 35-year-old southpaw has scored 5977 runs in 142 ODIs besides 2315 and 1673 Test and T20 runs respectively.
Neeraj Chopra nominated for Khel Ratna by AFI
Olympic-bound star javelin thrower Neeraj Chopra has been recommended for the Rajiv Gandhi Khel Ratna award by the Athletics Federation of India (AFI).
The 23-year-old Chopra’s nomination came after sprinter Dutee Chand was recommended for the same top award by the Odisha government.
This is the fourth time Chopra is being recommended for the Khel Ratna since 2018.
“Neeraj has been recommended by the awards committee for the Khel Ratna this year,” an official source told PTI on condition of anonymity.
Chopra has already been conferred with the Arjuna Award in 2018 after winning a gold in the Gold Coast Commonwealth Games. In that year, he was also recommended for the Khel Ratna.
He was again recommended for the Khel Ratna in 2019 after winning gold in the 2018 Asian Games.
Last year also, he was recommended for the top honour.
Chopra, who had qualified for the Tokyo Olympics in January 2020 in South Africa, is currently in Europe, preparing for the Tokyo Olympics.
He has taken part in three events — in Portugal, Sweden and Finland — since June 10.
He was to compete in an event in Switzerland on Tuesday but pulled out of it to give his body enough time to rest after a lot of travel.
He is expected to take part in the Gateshead (England) Diamond League on July 13. That would be Chopra’s biggest event before the Olympics, which opens on July 23.
Chopra had won bronze in Kuortane Games in Finland on Saturday last with an effort of 86.79m, behind season-leader and 2017 world champion Johannes Vetter (93.59m) and 2012 Olympics gold medallist and 2016 Games bronze winner Keshorn Walcott (89.12m).

That was Chopra’s third best performance this season since re-writing his own national record during the Indian Grand Prix 3 with a throw of 88.07m in March at the NIS Patiala. A few days later, he had thrown 87.80m during the Federation Cup at the same venue. (PTI)