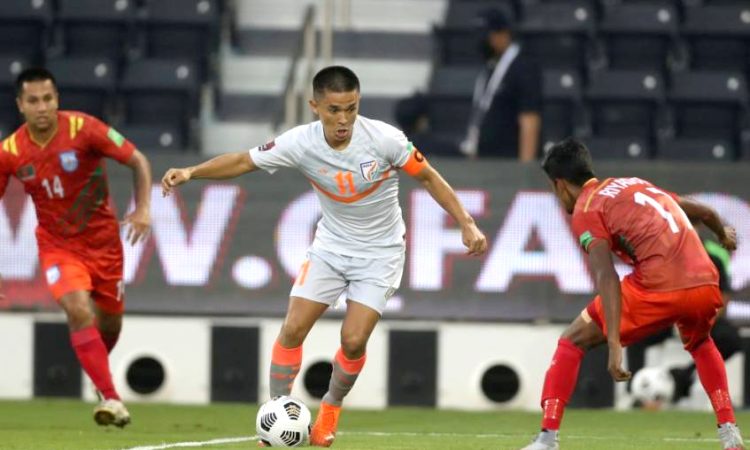 DOHA, June 7: India recorded their first win in FIFA World Cup qualifiers in six years after talisman Sunil Chhetri struck twice for a 2-0 victory over Bangladesh in the joint preliminary round match on Monday.

Chhetri first found the back of the net in the 79th minute to keep his team on course for entry into the third qualifying round of the 2023 Asian Cup.
Starting the match on the bench, second-half substitute Ashique Kuruniyan delivered a cross from the left for Chhetri, after a long run and from a tight angle, headed in brilliantly from behind Topu Barman at the Al Sadd Stadium.
It was that man Chhetri again as he rounded off his night with another fine strike in extra time (90+2) after receiving the ball from Suresh Singh from the right flank.
The double strikes meant India registered their first win in what was turning out to be one of their worst World Cup qualifying campaigns in many years. It was also their first victory in World Cup qualifiers away from home in 20 years.
A confident India found themselves pressing in the opposition half after Chhetri’s 73rd goal in international football and the move worked for beleaguered coach Igor Stimac as the captain scored his and the team’s second just before the final whistle.
Despite being ahead, India looked to add to their tally with both Ashique and Chhetri linking up well, even as most of the Bangladesh players moved up in search of an equaliser.
In the end, the equaliser did not materialise but India surely ended on a high, giving their campaign the much-needed boost after a series of winless outings.

With his two goals, Chhetri, international football’s second highest scorer among active players, more than made up for the fumble in the 63rd minute when the unmarked captain missed a free header after a fine ball from Brandon Fernandes. (PTI)