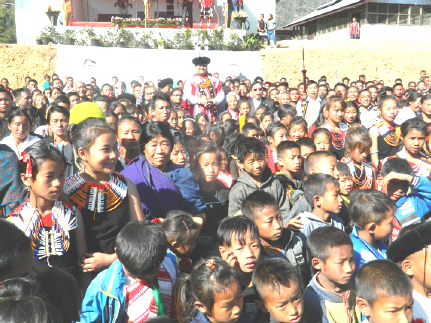 Ruzazho, January 23: In commemoration of 122nd birth anniversary of Netaji Subhash Chandra Bose, Delhi based Sudarshan News Channel Ltd. today adopted Ruzazho village under Phek district which is claimed as the first Azad Hind government administered village (1944).
Making the formal announcement of the adoption of this village under Corporate Social Responsibility (CSS), Sudarshan News Channel CMD and Editor-in-chief Suresh Chavhanke said that with the adoption the Sudarshan Rashtra Nirman Trust would endeavour to bring about all round development for this remote village.
He asserted that the Trust would pursue with the central government for bringing about funds for development of roads, converting the village into Heritage Village, developing the house where Bose stayed at Ruzazho into a national museum and also bring about Eklavya School into the village.
He announced that the Trust would work towards transforming and equipping the village with modern facilities and also connecting it with the mainland through social media and information technology. He said it would also move for granting of pension to those who helped Bose during his stay in this village.
Chavhanke announced that his channel would endeavour in providing job avenues in the metropolis for the interested youths of the village and also provide free training to one each male and female youth in pursuing journalism.
Asserting to turn this village into Digital Ruzazho, he said it would work towards setting up of wi-fi free village and also construct helipad for better connectivity.
“Support me and I will give you a developed Ruzhazo,” he declared while affirming that his team would visit the village regularly until the target is achieved.
Kevechutso Doulo, chairman NEPED in his address expressed optimistic that the adoption of Ruzazho by Sudarshan News Channel will go a long way in catering all round development of the village.
Praising Ruzazho village for its uniqueness in term of its historical background and the rich cultural heritage, Doulo challenged the villagers to maintain peace and unity for progress and prosperity.
Minister for higher education and technical education Temjen Imna Along in whose speech read out by Doulo in his absence due to urgent work in Delhi, stated “On this 122nd Birth Anniversary of Netaji Subhas Chandra Bose, we remember his tireless efforts and his sacrifice for a free India.”
He recalled that Netaji Subhas Chandra Bose and his army along with the Japanese force reached Kohima in 1944, during which the worst and toughest battle was fought.
He said a base camp was established at Ruzazho and Poswuyi Swuro was appointed as DB along with some GBs from the village.
“Thus, as per the oral history and through researchers writings, Poswuyi Swuro was the first appointed administration representative of the Azad Hind Government in Nagaland in 1944 and hence, the first Azad Hind Government administered Village,” Along stated.
Along expressed his sincere gratitude and acknowledged the tireless effort of the organizers, village council of Ruzazho, Government of Nagaland and not forgetting the hardships and sacrifices rendered by the villagers to the Azad Hind and the Japanese soldiers.
“May God bless Ruzazho village and may the people of Ruzazho village usher the Nagas in our great Nation building,” Along added.
Also speaking on the occasion, Sudarshan Coordinator T Sanyal said all the needs of the village will be taken by the Trust.
The function was chaired by Dr. Er. Vekho Swuro while Ruzazho village council chairman Jolelhu Veswuh delivered welcome address. Vote of thanks was proposed by management committee convenor Zaposeyo Shijoh.
The entire adoption ceremonial proceeding went live on Sudharshan TV Channel and also YouTube to solicit viewers’ attention for overall development and due recognition of Ruzazho village. (Page News Service)