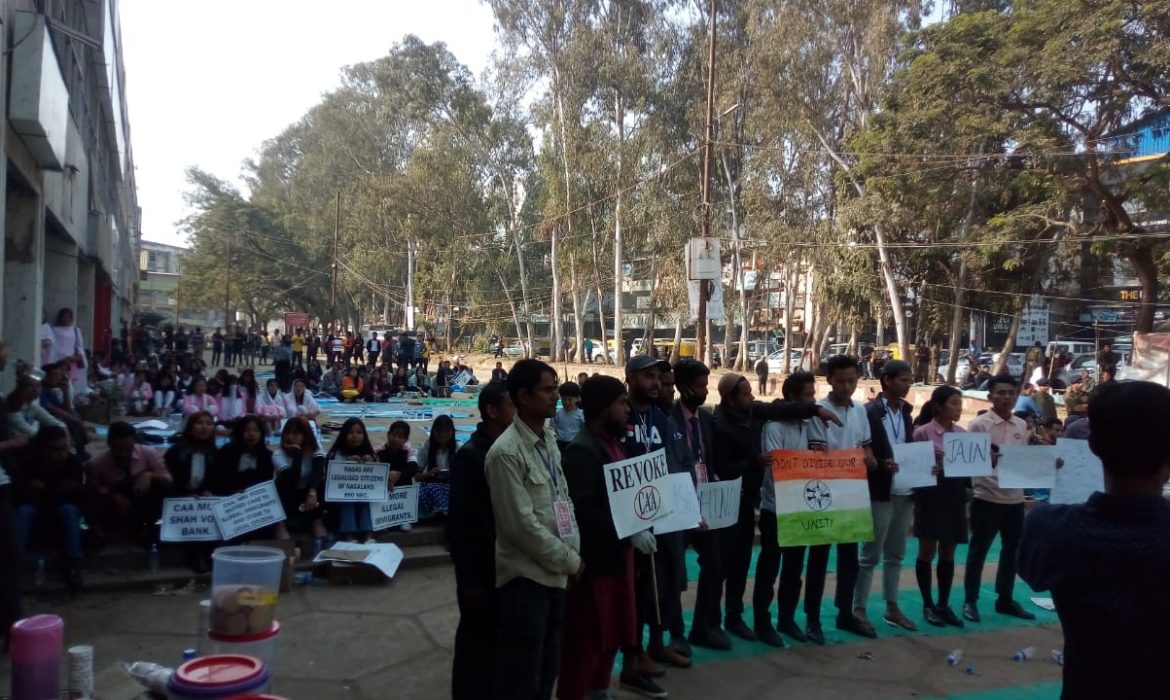 Dimapur, January 18: ‘Nagaland Against CAA’, an uprising against the Citizenship Amendment Act (CAA), today organized a peaceful public rallyin Super Market area here demanding that the Act be repealed.
The rally was held under tight heavy security with heavy deployment of police, IRB and security forces visible in the area to contain outbreak of any violence.
Various speakers at the rally raised concerns on the possibility of the indigenous people getting demographically overwhelmed and marginalised by illegal immigrants from outside the country because of CAA.
The protesters, mostly college students, were seen holding placards that read “We stand united against CAA”, “My stand against CAA”, “Modiji aapka CAA unsecular,” “Save Dimapur – Listen to peoples’ voice”, “CAA – Modi Shah vote bank”, etc.
Amid speeches by student leaders and civil society members, songs, skits and on the spot painting competitions based on anti-CAA theme were held during the rally.
Different speakers criticized the passage of the CAA by the Narendra Modi led Government and demanded that the Centre revoke the CAA because it is against the very spirits of the Constitution of India and granting citizenship on religious grounds is morally and constitutionally wrong.
A representative of Dimapur Gaonbura Federation asked, “How can we accommodate outsiders when we cannot stand on our own feet,” adding Nagas will not allow a single foreigner to settle in their soil.
Akavi N. Zhimomi Naga, a social activist representing youths of Nagaland demanded that the State Government pass a resolution against the implementation of CAA. “We are not fools, youths can’t be fooled any longer, Naga public can’t be fooled any longer. Our silence should not be taken for granted.”
He insisted that Nagaland should try to be the 3rd state in India to pass a resolution against the CAA like Punjab and Kerala, adding the State Government should not fool the public by citing ILP and other constitutional safeguards against the CAA.
X Chophika Sumi, a young social activist, said Amit Shah has called the students of JNU, AMU, Jamia Milia University and in fact anyone who criticize the Government as tukde-tukde gang. “I would like to send a message to Mr. Shah that there is a new tukde tukde gang in Nagaland. And this gang will not stop till those forces which tries to suppress the voice of the minorities, which tries to gag the voice of the students, which tries to bully everyone is defeated,” he said.
Stating hat some Nagas are saying that the ILP and Article 371(A) will protect the Nagas from CAA, he said, “When the Constitution itself is in danger, how can we be sure that ILP and Article 371 (A) will protect us?”
A Nagaland University Students Union (Lumami Campus) leader said Nagaland University students are against CAA, and urged the student community to know their right and fight for it. “We want democracy, not CAA,” he said.
A representative of the North East Indigenous Citizens Forum, Nagaland, accused Narendra Modi government of dividing India by bringing in CAA.
“Where is secularism under BJP government,” he asked.
Seated on two long rows, nearly 15 young people were seen painting different designs and slogans on pieces of papers and placards. One of them, a young girl, said that her painting depicts the deep anguish and the sorrows of the people of the state who were taken for granted during the passage of the bill by political leaders.
“Our future is at stake”, one young man with a painting brush in his hand said, adding “We need to act now.”
A police official deployed in the area to contain any violence said, “It is entirely peaceful, and everyone gathered here are making symbolic protests.”
The organizers of the protest said the protest in Nagaland is in its infancy and more protests will take place in due course of time and assured that they intend to protest in a democratic manner against CAA and will continue to protest along with the rest of Indian cities. (Page News Service)

On the hate speeches of BJP