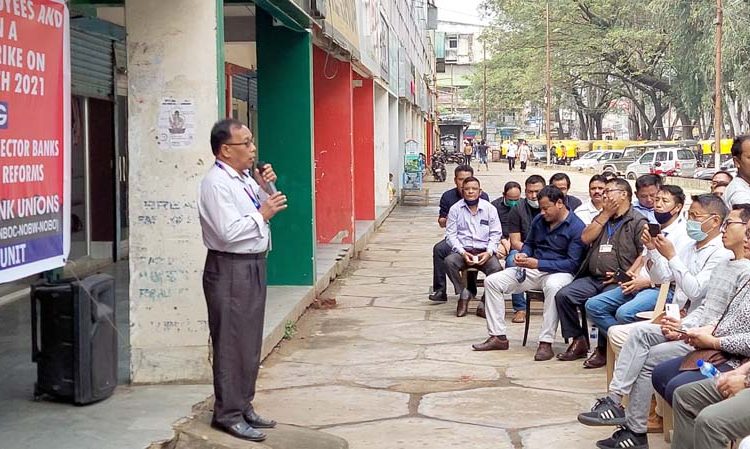 Dimapur, March 15: Along with the rest of the country, banking services such as cash withdrawals, deposits, cheque clearing and business transactions were impacted in Nagaland Monday, the day one of the PSU bank union’s strike, against the proposed privatization of two more state-owned lenders.

An umbrella of nine unions, United Forum of Bank Unions (UFBU), had given a strike call for March 15 and 16 and claimed that about 10 lakh bank employees and officers of the banks will participate in the strike.
In Dimapur, the employees of different banks converged at the Regional Office of the State Bank of India, Super Market and staged a protest against the Central Government’s decision to privatize public sector banks and retrograde banking reforms.
Speaking on the occasion, T A P Paul, State Secretary, AIBOC Nagaland State Unit, who is also the President of SBIOA, North East Circle highlighted about the sequence of events which led to the protest. He informed that agitational programmes started from February 19 this year with dharna, demonstration, petition, wearing black badges, distribution of leaflets/pamphlets, display of posters, petition to Prime Minister etc, which is culminating with the 2-day strike on March 15 and 16.
He said that the privatization of public sector banks will do more harm than good to the public.
Stating that the Union is against privatization of the banks, Paul said most of the nationalized banks are not only profit making but also serving the people of the country. No public sector bank is at loss, except one or two, he added.
He said that 40,000 crore Jan Dhan Yojana accounts have been opened in the public sector banks.
“If the government privatizes the banks, do youth think, they will open zero balance accounts?” he asked.
Paul also highlighted various other issues that would affect the banking sector after privatization of banks.
A large number of bank employees participated in the agitation today and will again join the strike tomorrow.
It may be mentioned that in the Union Budget presented last month, Finance Minister Nirmala Sitharaman had announced the privatization of two Public Sector Banks (PSBs) as part of the government’s disinvestment plan.
Meanwhile, ATM services were available in Dimapur, while some private banks provided services to the general public.