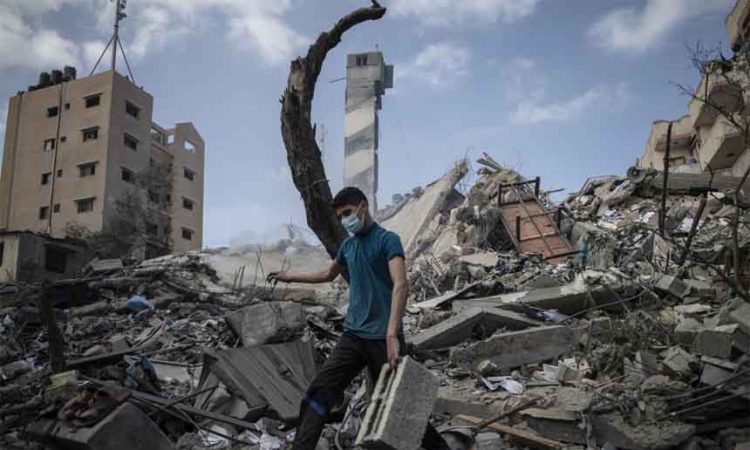 Gaza City (Gaza Strip), May 18: A strike launched from Gaza killed two Thai workers inside a packaging plant in southern Israel on Tuesday, police said, hours after Israeli airstrikes toppled a six-story building in the Palestinian territory that housed bookstores and educational centres.
With the war between Israel and Gaza’s Hamas rulers showing no sign of abating and truce efforts apparently stalled, Palestinians across Israel and the occupied territories went on strike in a rare collective action against Israel’s policies. The general strike and expected protests could further widen the conflict after a spasm of communal violence in Israel and protests across the occupied West Bank last week.

The Biden administration has declined so far to publicly criticize Israel’s part in the fighting or send a top-level envoy to the region. On Monday, the United States again blocked a proposed UN Security Council statement calling for an end to the crisis related to Gaza and the protection of civilians, especially children.
Among the buildings that Israeli airstrikes have leveled was the one housing The Associated Press Gaza office and those of other media outlets.
Netanyahu alleged that Hamas military intelligence was operating inside the building. US Secretary of State Antony Blinken said Tuesday that Israel had given the US information about the bombing. Israel has not publicly provided any evidence of its claim.
Blinken, speaking from Iceland, declined to characterise the material received.
AP President Gary Pruitt reiterated the organisation’s call for an independent investigation into the attack.
As we have said, we have no indication of a Hamas presence in the building, nor were we warned of any such possible presence before the airstrike, he said in a statement. We do not know what the Israeli evidence shows, and we want to know. (AP)