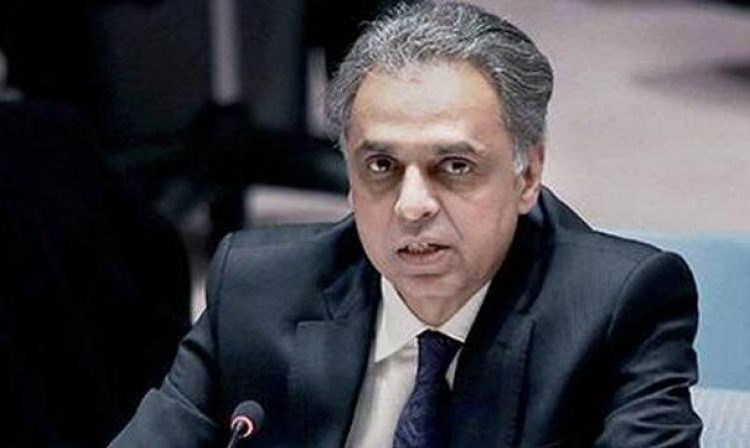 United Nations, August 16: India on Friday told Pakistan that it has to stop terrorism to start talks as the UN Security Council held a rare closed door meeting to discuss revocation of the special status of Jammu and Kashmir.
Briefing the media following the conclusion of the informal meeting requested by China and Pakistan, Indian envoy to the UN Syed Akbaruddin said India’s position was and remains that matters related to Article 370 of the Constitution are entirely an internal matter of India and these have no external ramifications.
Without naming Pakistan, he said there are some who are trying to project an “alarmist approach” to the situation in Kashmir, which is far from the ground realities.
“Stop terror to start talks,” he asserted.
On the Chinese and Pakistani envoys’ remarks after the UNSC meeting, he said, “For the first time after the end of Security Council consultations, we noted that two states (China and Pakistan) who made national statements tried to pass them off as the will of the international community.”
He said India is committed to gradually removing all restrictions in Kashmir.
“India remains committed to ensure that the situation in Kashmir remains calm and peaceful. We are committed to all the agreements that we have signed on this issue. We note that there are some who try to project an alarmist approach to the situation, which is far from the ground realities.”
“Of particular concern is that one state is using terminology of jihad and promoting violence in India, including by their leaders. Violence is no solution to the problems that all of us face,” Akbaruddin said, taking a swipe at Pakistan.
Earlier, briefing the media, Pakistan’s ambassador to the UN, Maleeha Lodhi said the voices of the people of Jammu and Kashmir were heard at the meeting of the UN Security Council, the highest diplomatic forum of the world.
“They (Kashmirs) are not alone, their voices have been heard, their plight, their hardship, their pain, their suffering…have been heard in the UN Security Council today,” she said.
Lodhi said the very fact this meeting had taken place is “testimony to the fact that this is an internationally recognised dispute”.
After the UNSC meeting, Chinese Ambassdor to the UN Zhang Jun urged India and Pakistan to settle their differences peacefully and “discard the zero-sum game mentality”.
“We call upon relevant parties to exercise peace and not to take actions that will aggravate tensions,” he said.
Voicing China’s stand on India revoking the special status of Kashmir, he said “the unilateral action by India has changed the status quo in Kashmir, which is an internationally recognised dispute.”
Voicing Beijing’s opposition to India forming a separate Union Territory of Ladakh after revocation of the special status of Kashmir, he said: “India’s actions have also challenged China’s sovereign interests and violated bilateral agreements in maintaining peace and stability in the border areas, and China is very much concerned.”
“I want to emphasise that such unilateral practice by India is not valid in relation to China, and will not change China’s exercise of sovereignty and effective administrative jurisdiction over the territory,” the Chinese envoy said.
“Both India and Pakistan are China’s friendly neighbours, and both are major developing countries. Both India and Pakistan are at a crucial stage of development. We call on the two sides to set store of the developments of peace in South Asia and discard this zero-sum game mentality and settle disputes peacefully and maintain peace and security in the region collectively and jointly,” he said.
Russia’s deputy permanent representative, Dimitry Polyanskiy told reporters before entering the meeting room that Moscow’s view is that it is a “bilateral issue” between India and Pakistan.
He said the meeting was being held to understand what is happening.
The outcome of the UNSC meeting will not be a formal pronouncement as the consultations are informal in nature. India and Pakistan did not attend the meeting, which was open only to the five permanent members and 10 non-permanent members.
According to UN records, the last time “the Security Council addressed the dispute between India and Pakistan over the territories of Jammu and Kashmir” under agenda item ‘The India-Pakistan question’ was in 1965.
On August 5, India revoked Article 370 of the Constitution removing special status to Jammu and Kashmir, and has also bifurcated the state into two Union Territories — Jammu and Kashmir, and Ladakh.
Reacting to India’s decision, Pakistan expelled the Indian High Commissioner soon after deciding to downgrade diplomatic ties with New Delhi.
India has categorically told the international community that its move to scrap Article 370 of the Constitution revoking the special status to Jammu and Kashmir was an internal matter and has also advised Pakistan to accept the reality.(PTI)