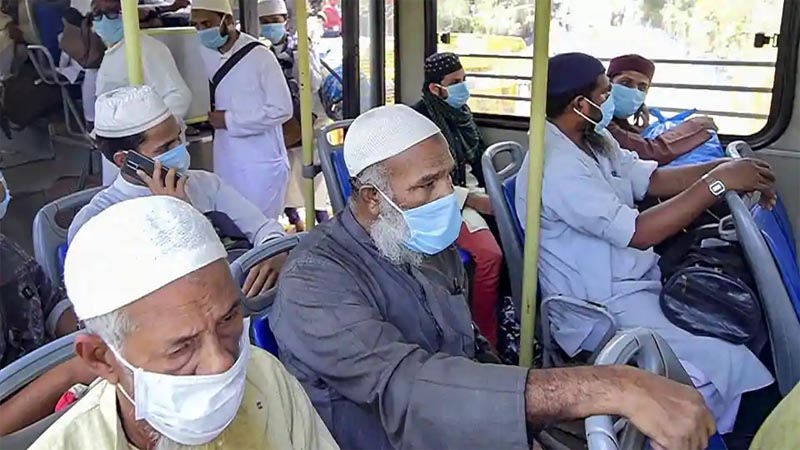 Nizamuddin congregants being taken to LNJP hospital for Covid-19 tests.

New Delhi, March 31: A Central home ministry document detailing the activities of the Tablighi Markaz, at the centre of about two dozen Covid-19 infections recently detected in Nizamuddin area of the national capital, says that about 824 foreigners associated with the religious congregation had fanned out to different Indian states for religious teachings and states had been directed on March 21 to identify them.
The government document says these foreigners had travelled to at least 12 states, most of them to Uttar Pradesh (132), Tamil Nadu (125), Maharashtra (115) and Haryana (115). They were also in Telangana, West Bengal, Madhya Pradesh and Karnataka in significant numbers.
The states had been asked to identify them, get them medically screened and quarantine them. However, the document doesn’t say how many of them have been traced so far.
These foreigners had left the Nizamuddin facility before March 21, a day before the self-imposed Janta Curfew and three days before the announcement of a three-week-long national lockdown by Prime Minister Narendra Modi.
“It is estimated that from January 1 onwards this year, approximately 2100 foreigners had visited India for Tabligh activities. While approximately 824 of them, as on March 21, were dispersed in different parts of the country, approximately 216 of them were staying at Nizamuddin Markaz. Others might have left the country before the lockdown,” the government document says.
4 religious preachers of the Muslim sect-Tabligh Jamaat—who were staying at a six-storey Nizamuddin hostel, have been detected with coronavirus and a few infections in states like Tamil Nadu and Telangana have also been traced to some of these preachers who had travelled to different states from Nizamuddin.
The MHA document says, the states were also advised to collect the names of Indian Tabligh Jamaat workers from the local coordinators, locate them on the ground, get them medically screened and quarantine them. It says about 2137 such persons have been identified in different states so far, but several others were yet to be traced.
The document adds that various nationals, particularly from Indonesia, Malaysia, Thailand, Nepal, Myanmar, Bangladesh, Sri Lanka and Kyrgyzstan come for Tabligh activities and report to the Tabligh Markaz at the Banglewali Mosque in Hazrat Nizamuddin in New Delhi. From here, they are detailed for “Chilla” activities to different parts of the country.
The document states that as on March 21, there were about 1746 persons staying in Hazrat Nizamuddin Markaz. Of these, 216 were foreigners and 1530 were Indians.
It adds that the residents were being medically screened since March 26 and a total of 1203 Tabligh Jamaat workers have been medically screened, out of which 303 were referred to different hospitals after they were found with the symptoms of Covid-19. Rest of them have been moved to different quarantine centres at Narela, Bakkarwala and Sultanpuri in Delhi.
The process to move every Tabligh Jamaat worker out of Nizamuddin Markaz will continue through the day, the document adds. (Courtesy: HT)