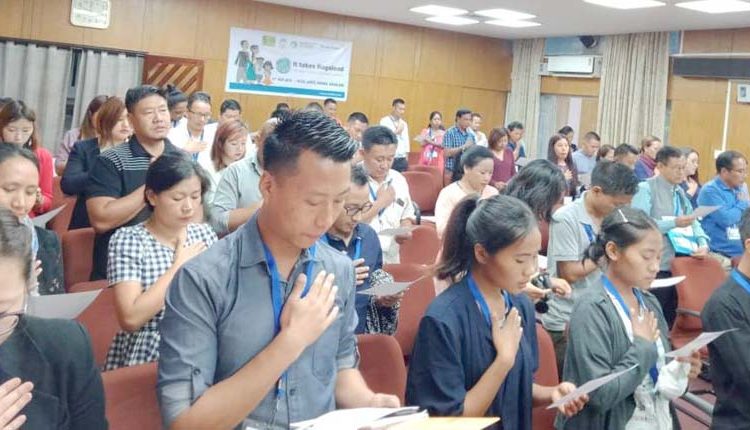 Section of participants taking pledge during state level consultation on “It takes Nagaland to End Child Sexual Abuse” in Kohima on July 10, 2019.

Kohima, July 10: With cases of child abuse increasing at an unprecedented rate in Nagaland, a State level consultation on “It takes Nagaland to end child sexual abuse” held in the State capital today pledged to firmly stand to prevent child abuse and also stop it.
The consultation was organized by World Vision India, an NGO working for child health and wealth, in partnership with Child Protection Services, Department of Social Welfare, Government of Nagaland and Childline 1098 at Hotel Japfu here.
Marking the consultation, chairperson of Nagaland Commission for Protection of Child Rights, N Awan Konyak administered the pledge “Let us end child sexual abuse” to the participants.
The assertion was to take all efforts to voice for the protection of children and speak up against all forms of violence against children.
The consultation also stressed on need to teach children to speak against the “touch” that hurts them and contact 1098 to report any incidence of child abuse.
Principal Director of School Education & SCERT, Shanavas C, said the topic ‘ending child sexual abuse’ is close to our hearts.
Shanavas said sexual abuse against child does take place in Nagaland. However he said many cases go reported because of the trauma within the family and relatives.
He said Nagaland having special provision under the Constitution of India, many cases of child abuse was settled under the customary law which was unfortunate. He said in such cases, the customary law and the constitutional law must be combined for stringent punishment against the perpetrators to see a changed society else the issue will go on.
Expressing that the campaign needs to reach the remotest corner of the State, he emphasized on printing pamphlets, broachers in local dialects that will help the villagers understand better so that they value the life of the victim instead of settling the cases by paying a fine with “pigs or hens” else the tendency of the heinous crimes will continue.
Deputy Director of World Vision India, Dr Anjana Purkayastha said that India has the largest rate of child sexual abuse and there are 36022 cases child abuse registered under Protection of Children from Sexual Offences (POCSO) Act during 2014-2016 with Nagaland having 29 registered cases.
Every 1:55 minutes, rape against a child below the age of 16 years occurs across the country and the registered cases under POCSO 36022 during 2014-2016 must have increased.
Landscape of abuse is at home, school, community, workplace or institutions, she said adding that India has the largest rate of child sexual abuse and if the issue was not taken care of at young age, it will have serious repercussions in adulthood period.
Dr. Purkayastha said World Vision India intends to reach at grass-root level, positively impact the lives of ten millions of most vulnerable girls and boys by 2021 to end child sex abuse.
To achieve this target, she said awareness in the communities, strengthen the implementation of the effective laws and policies and to strengthen the functioning of child protection systems in Indian by 2021.
Member secretary of Nagaland State Legal Services Authority, Longshithung Ezung dwelled on International Statues on Child Protection and Indian Legislation for Child Protection.
He said that in order to protect the child from abuses, people need to be aware about the rights of the child.
Child abuse in the state of Nagaland is a serious issue and the rate of child abuse in the state is growing at an alarming rate, he said.
The Nagaland chapter of Childline based in Dimapur was started in 2011 and since inception, it has intervened in 1457 cases pertaining to various “child protection risk areas” which include child abuse, trafficking, child labour, missing children, emotional support and guidance and various other distress situations children experienced, he said.
Cases of exploitation of children for domestic labour is of great concern, he said, adding that in many homes across the state, children undergo all kinds of abuse and rights violation mostly due to ignorance of the families and the children. (Page News Service)