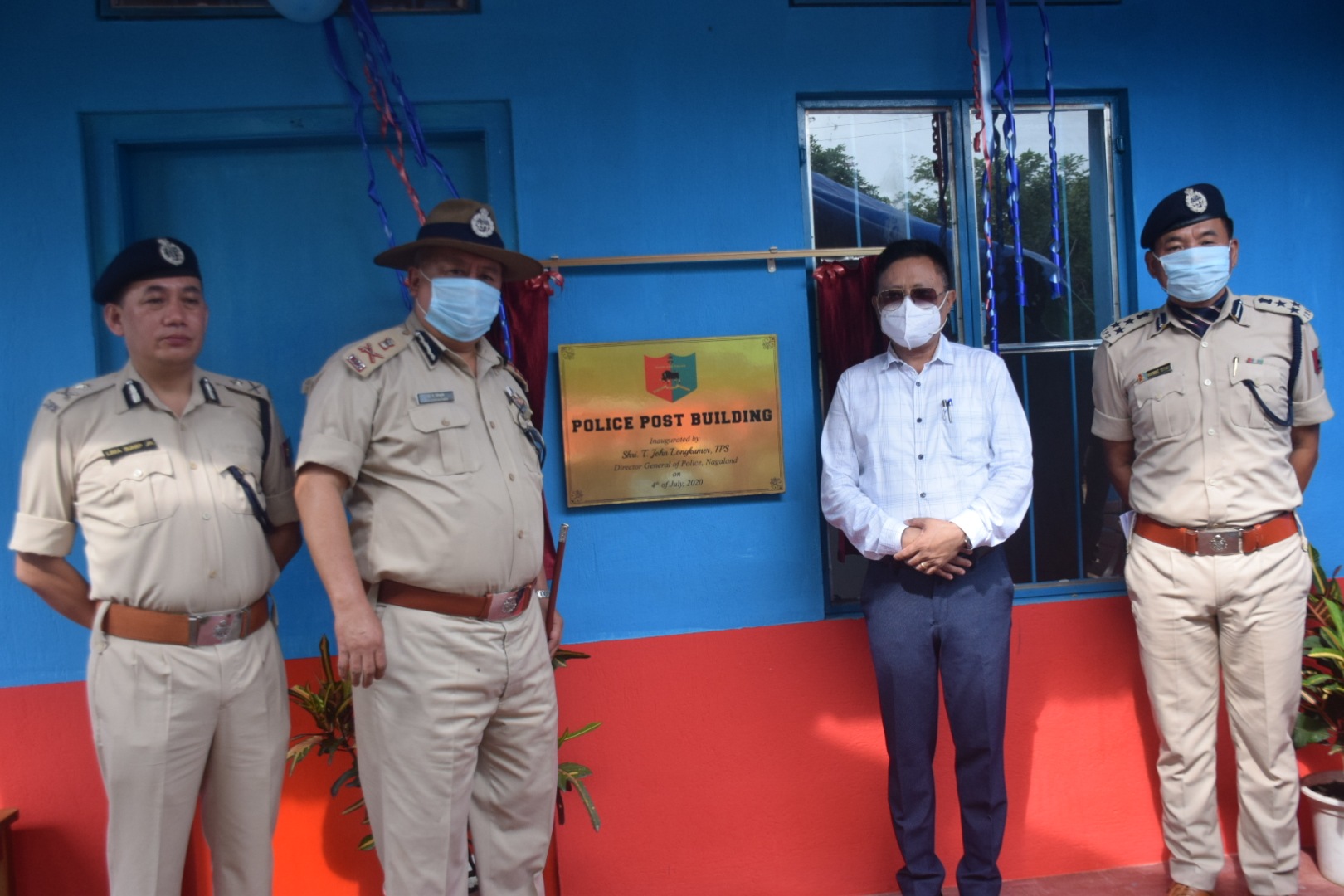 Dimapur, July 4: Director General Police Nagaland, T John Longkumer inaugurated the Police Post building at Dillai Gate on July 4.
In his address, Longkumer, advised the policemen who would be posted at the border gates for creating good image of Nagaland Police , to be smart, efficient polite and kind and reminded them that the first impression of Nagaland police would be created in the border areas. He cited the example of 9th IR who were smart, disciplined and created the whole mood for operation earning good reputation for Nagaland while at Chattisgarh. .
“You are here to give protection to the citizens and not to harass and therefore stern action will be initiated in such instances,” the police chief warned.
Longkumer further appeal to the police men for making the building “a house of respect “and advised them to maintain the sanctity of it.
DGP also congratulated the Commissioner Police Dimapur Rothihu Tetseo IPS and DCP Zone 2 Atula for completing the works and making it functional within a short period of time.
On the occasion, Longkumer also expressed his appreciation to Team DImapur, including the medical fraternity, churches, civil societies, NGOs and individuals for rendering selfless sacrifice in the fight against COVID-19. “You have all done very well and I will say your performance was simply outstanding,” he said.
Nagaland APC, also in-charge of Dimapur district COVID 19 activities, Y Kikheto Sema felt that with the new Police Post facility, the mindset, attitude and way of living of the people residing in the border areas also ought to change. Sema called upon the Nagas to have peaceful and cordial relations with the immediate neighbours and encouraged them to love one another.
Let this place be clean and be a place of prayer desisting from drinking and smoking, he requested the police personnel who will be manning the post. Sema also donated a refrigerator on behalf of his family to be kept in the new Police Post building for the convenience of the police personnel.
Commissioner police Rothihu Tetseo IPS noted that the establishment of the Police Post building at Dillai gate will be important in the history of the Nagas and appealed to the people living in the border areas for understanding the importance and significance of it and called upon them for extending their support and cooperation even in the future. He informed that the construction work of the building which commenced on April 30 was completed within a record time of 2 months with quality workmanship.
EAC (Sardar) Bendang Longkumer, on behalf of the district administration, congratulated DImapur police led by CP Dimapur for constructing the facility in a record time for the benefit of the Nagas. He desired that such people centric development activities ought to take place from time to time for the welfare of the people. With the support and coordination between the District administration and Dimapur Police, Bendang was optimistic to make Dimapur a better place to live in.
Chairman, Rilan village, John Kikon extended appreciation to the Government of Nagaland for establishing the Police Post and termed it as a bold decision. Terming the establishment of the police post as a dream come true, Kikon observed that it would benefit the people living in the border areas.
Chairman, Aokong village, said that it was a long awaited day and assured of full cooperation to the police department.
Hosts of police officials including IG Range, Limasunep, DIG Training Aotemsu, DIG Border and other rank and file of police, villagers from the bordering villages attended the inaugural function.
ADCP (Crime) Relo Aye chaired the programme while Pastor, PBC, Rev. Levi Rakho gave the dedicatory prayer. (Page News Service)