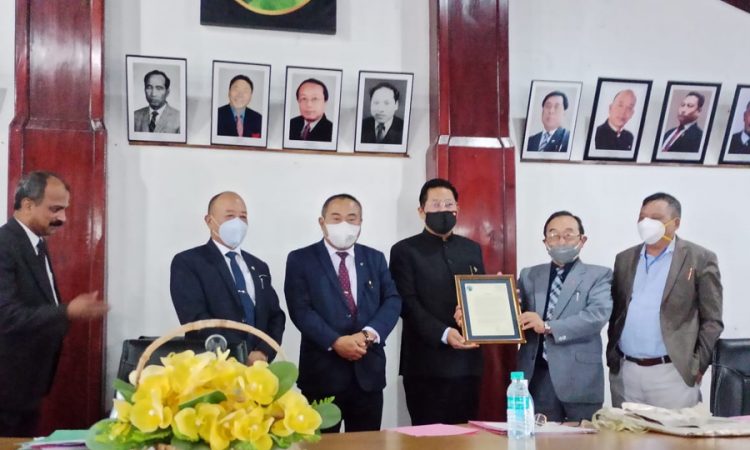 Kohima, October 23: State Consultant to Legislators’ Forum on AIDS (LFA), Dr. Vinito L Chishi, along with 4 other individuals was felicitated at the programme held in honour of LFA at Nagaland Legislative Assembly Secretariat, Kohima on Friday.
“While trying to tackle COVID-19, HIV/AIDS is silently coming up, even with the dissolution of Legislators’ Forum on AIDS (LFA) on 2020, efforts toward eradication of HIV/AIDS in the State must continue in one way or the other,” stated Dr. Chishi in his acceptance speech.
Minister for Planning & Coordination, Land Revenue & Parliamentary Affairs, Nagaland, Neiba Kronu said LFA was formed in the State of Nagaland in 2007 with the aim to combat the HIV/AIDS infection which posed a threat to the Indian Sub-continent with the prevalence rate at 2.00% which persisted from 2005-07.
Tracing the origin of the Forum, Kronu informed that when HIV/AIDS started to grab attention internationally, the Indian Government in partnership with National AIDS Control Organization (NACO) formed the “Forum of Parliamentarians on AIDS (FPA)” at the Centre with its Headquarters in New Delhi, calling for active involvement and participation at all levels, especially Parliamentarians, irrespective of party affiliations.
Apprising the gathering on the genesis of LFA in Nagaland, Kronu said UNAIDS in partnership with the NLA established the LFA office in the Assembly Secretariat with the initiative of the then Speaker NLA, Kiyanielie Peseyie. He said the project was established for a period of 5 years from 2008-2013 initially but was extended for one year as a special case since the HIV prevalence rate was slow in decline. In order to strengthen the programme without interruption, LFA continued its support till 2019, he added.
Elaborating the roles played by LFA, Kronu said the Forum became the intercessors for the HIV/AIDS individuals needing support, care and treatment. It organized exposure trips to various countries to sensitize elected members.
“LFA worked tirelessly to disseminate information and to create awareness among the people, and to reduce stigma and discrimination,” Kronu stated.
Kronu also assured that though LFA will discontinue, they have passed on the responsibility to the churches under Nagaland Baptist Church Council (NBCC) and Nagaland Development Outreach (NDO), so that continued awareness and education is imparted to the people through various church initiatives. “I am sure LFA has prepared various materials that will provide guidance and insight to the people taking up the responsibility,” he added.
Also present at the event, MLA, Chotisuh Sazo said the aims and objective of the LFA was to eradicate HIV/AIDS which was an agenda for the nation, not only for India but for the whole world. It was a commitment premised on the foundation that ‘failure to tackle the growth of HIV/AIDS would result in catastrophic harm to the social fabric of the country and further result in huge social and economic loss to the country, he added.
Sazo also informed that in addition to UNAID funds, the support of the Nagaland’s LFA has made it possible with a contribution of Rs.1 lakh each every year by the legislators from Local Area Development Fund (LADF). Since then the advocacy and awareness campaign has been conducted in the State, covering all the 60 constituencies, he added.
The other individuals felicitated were Administrator Hukatoli Chopy Tetseo, Dealing Assistant Tevete Lasuh, Attendant Amhano and Driver, Thomas.
NLA Speaker Sharingain Longkumer, Commissioner & Secretary, Dr. P.J Anthony and State Chaplain T.W. Yamyap Konyak was present at the programme. (Page News Service)