Kohima, April 30: Nagaland for the first time today joined the rest of the world in celebrating the International Jazz Day by holding Kohima ‘Arts and Jazz festival’ at RCEMPA, Jotsoma here.
Advisor for Youth Resources and Sports Engineer Zale Neikha addressing the music lovers during the evening concert said the Government of Nagaland is trying it’s best to promote music industry. Remarking that Naga people have more inclination towards some genres, he urged the people to give importance to all the genre of music, so as to flourish the music industry in the state.
He added that State Government is creating more platforms to encourage young talents to get the deserving exposure. More avenues will be created in the same field, provided, to those who work hard, he said.
Maintaining that the world demands professionalism, Neikha urged the youngsters to take up professionalism courses in order to compete with others.
Also announcing that Nagaland is introducing ‘performing arts’ for the first time this year, Neikha said people will be taught to act and communicate to improve the society.
The programme was hosted by the Music Task Force and the Nagaland College of Music and Fine Arts (NCMFA), in Kohima.
Earlier, Editor of All India Radio Kohima, Asono declared the Art and Jazz festival open.
The day-long programme featured art and photo gallery, restaurants, bouncy castle, ethnic food and stalls, and live music. It also witnessed Blue jam session and concert at the later part of the day.
Various local artists, bands, and musicians performed during the concert. Some bands such as, NCMFA jazz ensemble led by a Jazz professor Chris Cho, NCMFA choir led by Vesato Thuluo, who is also the Managing Director of NCMFA and Ameu Usou Zao and the Choir participated. Local Artists like Mengu Soukhrie, Tetseo Sisters, Blueprint, Virie, and Nagagenous were among other musicians participated at the concert. Rev. Vikuo Rhi said a prayer of blessing for the concert.
(Page News Service) 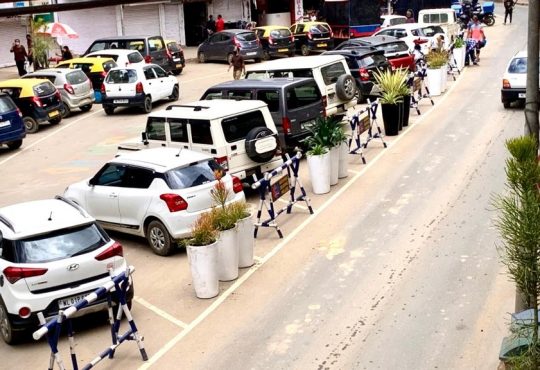